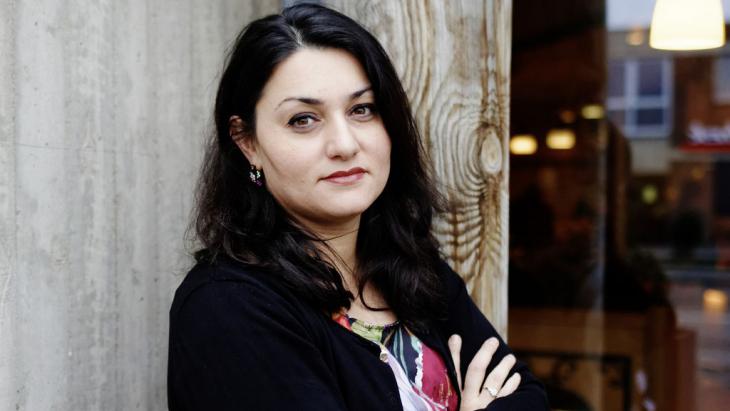 What is required of us

Our country needs to respect and value minorities more and to empathise with them more. It also needs an honest debate about what we – not they – must bring to the table, writes Lamya Kaddor

Germany has a racism problem. And our country has to think seriously about what it can do about it. In addition to discussing this problem openly, we have to call to mind our democratic responsibilities, define them clearly and insist that every member of society fulfils them.

The incessant debate about what we can and must require of minorities in this country is getting us nowhere. There has long been agreement that newcomers have to learn the language and abide by the laws of this country. No-one disputes this.

No, the time has come to discuss what is required of us. And the fact of the matter is that something is required of us. After all, it was a German policy to recruit ″guest-workers″ for the domestic labour market. Now they and their children and grandchildren work here and pay taxes.

They are no longer guests. Nor are the migrants who moved here from the former GDR. What's more, as a society, we bear responsibility for the people seeking protection here in Germany. After all, we are not entirely innocent of the misery that prevails in many of their countries.

For years, our politicians negotiated and co-operated with states that later fell out of favour. On the eve of the Arab Spring in 2011, the picture in almost all European capitals was similar: the dictators of Syria, Egypt and Libya – the Assads, Mubaraks, Gaddafis and their ilk – were all cosy with the heads of government and state in Europe and America.

They were received in the Elysee Palace, Downing Street, the German Federal Chancellery and the White House like old friends, which is why all European heads of state and government were so taken aback when the Arab Spring began.

This also explains the European Union's complete and utter failure in the face of this upheaval. There were furrowed brows in Brussels: what next? What do we do now? What comes after the Mubaraks and the Gaddafis? 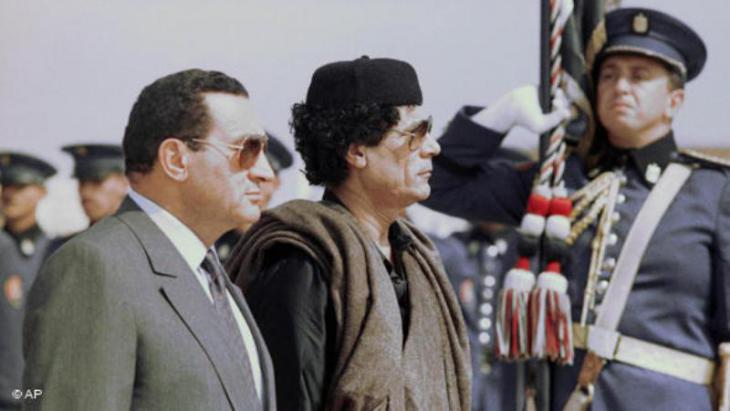 At their service: "for years, our politicians negotiated and co-operated with states that later fell out of favour. On the eve of the Arab Spring in 2011, the picture in almost all European capitals was similar: the dictators of Syria, Egypt and Libya – the Assads, Mubaraks, Gaddafis and their ilk – were all cosy with the heads of government and state in Europe and America," writes Lamya Kaddor

Everyone was thunderstruck. No one had ever seriously thought about how to get rid of the dictatorships on the other side of the Mediterranean and no one wanted to either.

Today, the very same mistake is being made again: out of a fear of refugees and Islamists, theirs is an over-hasty willingness to accept that in al-Sisi, Egypt is now being steered by someone even worse than Mubarak. The rage about the renewed repression in Egypt will boil over again in a few years or decades.

We still consider Saudi-Arabia to be an ally in the war on terrorism, for instance, wilfully overlooking the fact that the ideological principles on which this very terrorism is built have been exported from this country for decades. We are supplying a tyrannical regime with weapons, tanks and other military equipment.

We don't want Turkey to join the EU, but do much to placate our NATO partner so that it stops people who have fled their country from heading to Central Europe. We are even willing to let it cost us several billion euros. We turn two blind eyes when human rights are abused and democratic principles are sacrificed.

These new Germans who are currently arriving will indeed cost us quite a bit of money. We have to invest in education, integration, our social system and labour. Experts estimate that all this will set us back over €15 billion. And yet this figure pales in comparison to the sums of money that were bandied about when it came to rescuing the banks.

Even though there are other stable democracies around the world, Germany is still unique. Our values were nourished above all by the Enlightenment in the seventeenth and eighteenth centuries and the lessons learned from the barbarism of the twentieth century.

They are rooted in philosophy and in the morals and ethics of Judaism, Christianity and even Islam. Moreover, it is a well-known fact that we got the ingredients for the Renaissance and the recipes that went with them from the Arabs, the Persians and the Ottomans. 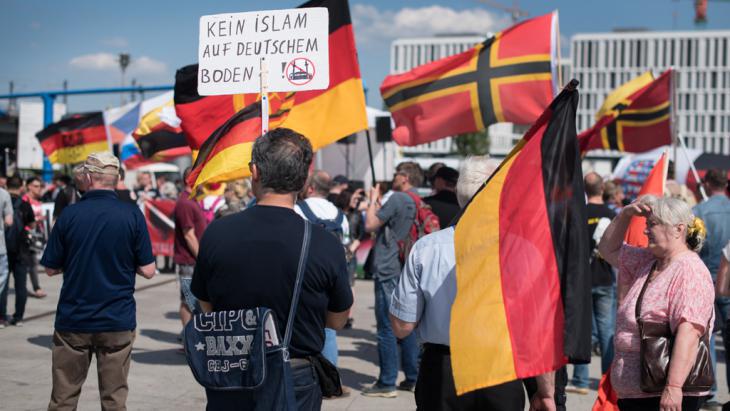 Burgeoning right-wing populism: demonstrators take a stance in front of Berlin′s main railway station on 07.05.2016. The right-wing populist movement "Wir für Berlin & Wir für Deutschland" appealed for people to take part in the demonstration under the slogan ″Merkel has to go″. Not only neo-Nazis and other Islamophobic groups are feeding the climate of fear and polarisation in Germany, but also nationalist, racist, right-wing populist associations and parties such as the AfD

If we want to prove – and even demonstrate – to the world that we keep our promises and that these values really mean something to us and are not just hollow words, then we have to stand up and face the challenge that lies ahead.

After all, it is illusory to believe that an entire society adopts the values of liberty, equality and fraternity, just as it is to think that some day, all people will be good. There will always be troublemakers who are driven by their own personal motivations or a lust for power.

It is the never-ending task of a society to face up to this fact. It takes courage to take a stand against the hardliners and to endure hostility. Instead of looking at the others and demanding something of them, the time has come to take a long, hard look at ourselves.

Our society needs to respect and value minorities more and to empathise with them more. We also have to re-learn how to respect majority decisions. If we don't like the outcome of such decisions, democratic societies offer enough tools to do something about it.

Societies are in a state of permanent flux. We can shape this change for the benefit of everyone.

We live in a time when anything is possible. Absolutely anything.

Who would have thought just a few years ago that a considerable number of people in Europe would be willing to reject and turn their backs on the European community of shared values and all the advantages it offers every one of us? 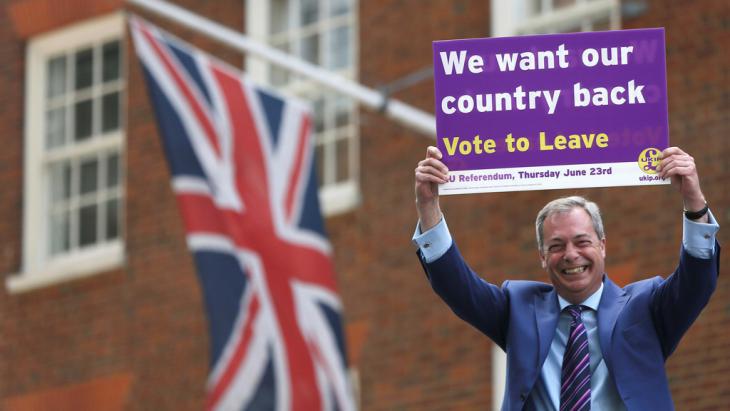 No to Europe, yes to "Democrexit": "Brexit is above all the result of an attitude that rejects the rights of foreign-born minorities. It is also the result of a fear of change, especially among the middle-aged and the elderly," writes Kaddor

This is what happened in the UK on 23 June 2016 when voters in the referendum gave a clear answer to the question as to whether the UK should remain in the EU or not. For weeks in the run-up to the referendum, right-wing populists banged their drums and disparaged their opponents. The outcome was Brexit and, therefore, to a certain extent, Democrexit.

It wasn't impatience with Brussels' bureaucracy or the lack of transparency in European institutions that made the outcome possible, as many political observers claim.

Brexit is above all the result of an attitude that rejects the rights of foreign-born minorities. It is also the result of a fear of change, especially among the middle-aged and the elderly.

Analyses of voter behaviour in the referendum leave no doubt whatsoever: it was above all older people who voted for Brexit because they wanted their 'old' England back and for them, that means one thing above all else: fewer foreigners.

Brexit is a total meltdown

Academic colleagues with foreign roots report that there was a marked change in the mood in England immediately after the Brexit vote: some were threatened on the street and called on to leave the country; the walls of foreign institutes were daubed with slogans. One of the main promises made by those who campaigned for Brexit was that the migrants would be shown the door.

For me, Brexit is a cautionary tale of what can happen if we continue to give scaremongers free rein. Sometimes we need cautionary tales to really comprehend that our society is facing a real and fundamental test.

In every respect, Brexit is a total meltdown. Presumably, no-one ever really believed that it could actually happen. It is a rejection of a common Europe of diversity, a Europe without borders. It is an emphatic 'no' to a multi-religious, multicultural, open and liberal society.

We should be seriously concerned, now more than ever. We cannot abandon our future to those who shout the loudest, systematically erode our democracy with their nation-centric attitudes and undermine the basis of peaceful co-existence with their organised hate.

In their world view, democratic values only apply to a group of citizens of their choosing. Everyone must be aware that this gradually weakens fundamental rights and, therefore, democracy.

The most important questions we must ask ourselves – and to which we urgently need to find answers – are: who are we? Where does our society stand? Which moral values do we want to guide the way we live together in the future?

We live in a time when anything is possible. Absolutely anything.

Lamya Kaddor is a German Muslim with Syrian roots. She is a religion teacher, a scholar of Islam and board member of Germany's Liberal Islamic Association.

Koshary is probably the most popular street food in Cairo. The Egyptian national dish, which consists of chickpeas, noodles, lentils, rice and tomato sauce, also lends its name to ... END_OF_DOCUMENT_TOKEN_TO_BE_REPLACED

Omid Nouripour fled Iran for Germany with his family at the age of 13. Today, he is foreign policy spokesman for Germany’s Green Party. He argues that societal differences should ... END_OF_DOCUMENT_TOKEN_TO_BE_REPLACED

Last week Egypt's police stepped up an "unprecedented escalation" on activists by arresting a leading rights group director. Advocates on the Nile have long weathered a crackdown ... END_OF_DOCUMENT_TOKEN_TO_BE_REPLACED

What drives young men into the arms of Islamist extremists – and how can they be re-integrated into society? Five years after the deadly attacks in Paris, urgent questions remain ... END_OF_DOCUMENT_TOKEN_TO_BE_REPLACED

Austria's chancellor is seeking to criminalise "political Islam". The move would put non-violent, non-radical Muslims under blanket suspicion and is hardly helpful in the fight ... END_OF_DOCUMENT_TOKEN_TO_BE_REPLACED

Rather than suspecting Muslims in general, we need to co-operate more with Islamic scholars, Muslim congregations and associations, writes Muhammad Sameer Murtaza in his ... END_OF_DOCUMENT_TOKEN_TO_BE_REPLACED
Author:
Lamya Kaddor
Date:
Mail:
Send via mail

END_OF_DOCUMENT_TOKEN_TO_BE_REPLACED
Social media
and networks
Subscribe to our
newsletter