Skip to main content
Integration of Muslims in the US

North American Muslims are better integrated into their societies than are their European counterparts. What allows them to participate without assimilation is the "pluralistic" public sphere, says Marcia Pally 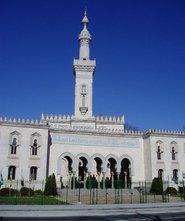 American-Muslim relations relations are strained; but even after 9/11, there were but a few anti-Muslim incidents, Marcia Pally observes

​​The Pew Forum, which generally makes Americans feel lousy about themselves, has just tossed us a rose. We compare miserably with other industrialized nations on poverty, educational and incarceration levels, health care, environmental protection, international aid, even infant mortality – you'd think with all the opposition to abortion, we'd at least be able to keep born babies alive. But we're dandy on immigrants, at least compared to Old Europe. Even Muslim immigrants, even devout, veiled Muslims, even after 9/11. God Bless America.

Pew says Europe's Muslims are "ghettoized" and "markedly less well off than the general population, frustrated with economic opportunities and socially isolated." Ours say "their communities are excellent or good places to live"; 71% say people can succeed in the US if they work at it. Both income and college graduation levels match the national norms. Most feel Muslims should adopt American customs once in the US and 63% report no conflict between religious devotion and living in a modern society.

"What emerges" said Amaney Jamal, an adviser to the study, "is the great success of the Muslim American population in its socioeconomic assimilation." Jamal meant well, but it's not "assimilation" that is the success. "Assimilation" means dissolving into the mainstream, but Muslim-Americans do not; they remain devoutly Muslim.

​​Yet as 63% said, they feel no conflict between keeping this distinguishing practice and living in modernity. That is, they participate in the economic, political, educational and social life of America while practicing their faith.

One could argue that they do because of a self-selection process: only those Muslims who are up for the uncushioned (few social services) but relatively open possibilities of American life come here. Europe's immigrants, on this theory, migrate for the dole and don't care about participating in Europe's economic and political life. Yet that doesn't explain why America's Muslim immigrants remain religious; in fact, wanting to succeed US-style, they should be quick to "assimilate."

What allows them to participate without assimilation is the "pluralistic" public sphere, not a secular one – secular meaning 'without religion' and pluralistic meaning 'with many.' We've had so many religious groups participating in the socio-economic, educational and political life that one more is just that, one more. No big deal.

America has not been pluralistic out of virtue but of necessity: we needed to attract as many immigrants as were willing to endure the hardships of the frontier and later industrialization. But the benefit of this accidental generosity was a pluralistic deal: immigrants had to contribute to the economic and political fracas of the nation but they could keep not only their private faith but their community practice. There has of course been prejudice, but this tends to fall in importance as participation increases.

Upward mobility: Keith Ellison is the first Muslim in Congress and the first non-white representative Minnesota has sent to Washington

​​What remains in America is the paradoxical-sounding "familiarity with difference." As Americans are used to many different sorts of people in the socio-economic, educational and political arenas, they've gotten used to distinguishing the few differences that might damage the country from those – most – which will not. At least they tend not to panic. Even after 9/11, there were but a few anti-Muslim incidents.

More than that, Americans have become confident that, once participating, folks don't feel the need to make a belligerent, rebellious point of their differences. If they're participating, who would they be rebelling against? It's the American buy-out plan. Identity does not require conformity; to feel oneself as American and to see others as such does not hang on it. "Sameness" might be a tacit requirement of subgroups but not of entry into national, city or school life.

Pressure is to participate

In the US, the pressure is to participate in the socio-economic, educational and political spheres, which remain relatively porous to allow this to happen; religious and ethnic custom we evade on a "live and let live" basis.

In Europe, if we believe Pew and Europe's own press, there is considerable concern about custom and far less porous economic, educational and political structures. With a less participation comes less familiarity with difference on the host country's side and more resentment on the immigrants', which may lead to angry insistence on maintaining differences in a society less able to accept them. To wit, the headscarf kerfuffle.

It is, as a 1945 New York Times called the paranoia between the US and USSR, a "vicious circle." No one in Europe wants an internal Cold War. But I was shocked when I was recently asked by a number of Germans if I require that female Muslim students remove their veils when they attend my university classes. I would no more do that than require them to remove their underwear.

And for the record, the two Muslim women in my spring seminar had tough arguments about religion only with a secular Egyptian, not with any American student. And they were among the best in the class.

Integrating Islam in Europe
Tolerance Cannot Be Based on Fear
In order to successfully integrate Muslims, European societies have to demand that they embrace the principle of religious freedom. However, this also entails a strict separation of church and state in Europe, writes Paul Scheffer in his essay

Islamic Architecture
Modern Houses of Worship: Mosques in the USA
In the United States there are over 200 mosques that combine traditional designs from Islamic countries with modern American architecture. A report by Abdul-Ahmad Rashid

END_OF_DOCUMENT_TOKEN_TO_BE_REPLACED
Social media
and networks
Subscribe to our
newsletter