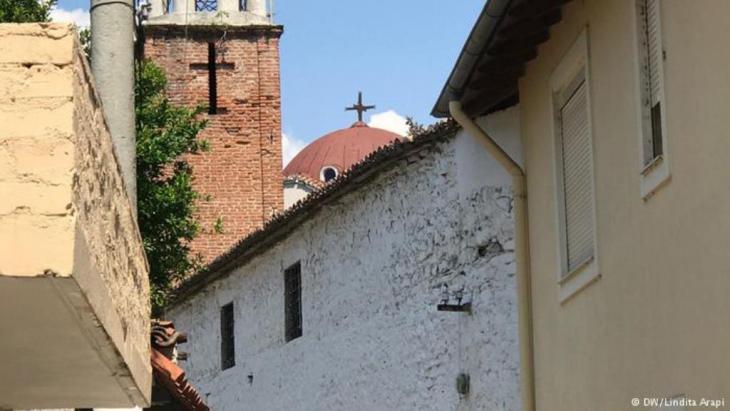 Three houses of worship stand in close proximity – a mosque, a Catholic church and an Orthodox church: Elbasan's old town is a veritable symbol of religious tolerance in Albania. Extremists do not appreciate this image. By Lindita Arapi

When Gezim Karaj, the imam of the King Mosque in the central Albanian town of Elbasan, is driving home and sees Father Nikolla, the Orthodox priest of St. Mary's Church, he stops the car and offers the elderly gentleman a ride. "That's just normal for us, because we like to chat. Sure, we have different beliefs, but that doesn't prevent us from having friendly relations. We need each other and we help each other," says the imam.

The Orthodox church where Father Nikolla holds services and the mosque where the imam preaches are located close together in Elbasan's old town. And from the garden of the Orthodox church, one can see the old Catholic church from the Byzantine period. For years, Bishop Josif Papamihali held masses there, the man who was declared a Catholic martyr by the Pope one year ago.

"In Elbasan, it is not uncommon to see a Christian priest and an imam drinking a mokka together in one of the little cafes near the old castle," says Ilir Hoxholli, an expert in religion and former head of the state religious authority. He calls this peaceful coexistence of religions "the best export article Albania has to offer the rest of the world". 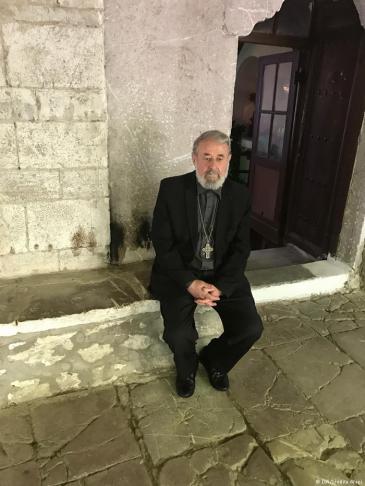 Discovering common religious ground: "These good relations, the way the various religions embrace one another, is a gift to us. But we are merely carrying on the tradition of our forefathers. I grew up with stories that taught this simple but clear and pure tradition of faith," says Father Nikolla

Around this time of year, the sun often shines in the south and the weather is warm. Few people are on the streets at midday. Elbasan seems like a sleepy town. From the window of an old house next door to the Catholic church, an elderly woman greets passers-by.

For her, it's nothing special for the different religions in the town to get along so peacefully with each other. "It's always been that way," says the 60-year-old, pointing to the entrance of St. Mary's Church.

The most beautiful moment in my life

Father Nikolla is sitting there, in a small courtyard under an arbour overgrown with wine. The Orthodox faithful come by, bowing to the old man and wishing him a swift recovery before entering the church. But Muslims also stop by and inquire about the father's health.

"These good relations, the way the various religions embrace one another, is a gift to us. But we are merely carrying on the tradition of our forefathers. I grew up with stories that taught this simple but clear and pure tradition of faith," says Father Nikolla.

He makes a fragile impression, but his voice grows stronger as he speaks about the most beautiful moment in his life. "When the Communist bloc came to an end and there was the opportunity to open the houses of worship again, the people of Elbasan did not resume going to church or to the mosque separately. No, everyone festively reopened the churches and the mosques together. Isn't that just wonderful?"

The inhabitants of Elbasan proudly relate that Muslims, Catholics and Orthodox have not only lived together in peace here for centuries, but also like to celebrate the religious festivals of each faith together.

"This tolerance is part of the very roots of this history-rich town, which was originally Greek Orthodox. Islam came later," says municipal media officer of Elbasan, Besim Dybeli. "Today there are still cases that combine a Greek first name with a Muslim surname." And there are also many religiously mixed marriages in Elbasan. "This religious harmony is a product of our common history. We have always seen ourselves as Albanians first, Muslims or Christians second," he says.

Albania likes to boast of the religious harmony that prevails among its four official religions. About 60 percent of the nearly three million Albanians are of the Islamic faith, ten percent are Catholics, about seven percent Orthodox and two percent are members of the Bektashi, an ancient dervish order. In January 2015, the four religious representatives from Albania received much acclaim when they took part arm-in-arm in the funeral march in Paris in memory of the victims of the terrorist attack on the newspaper "Charlie Hebdo". 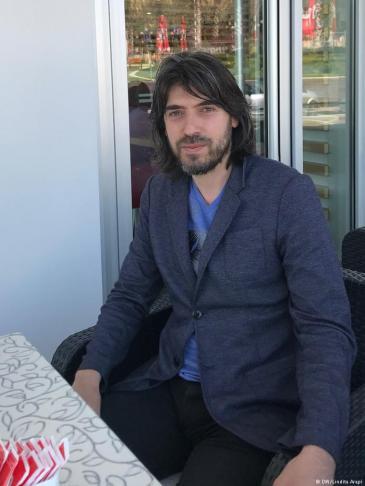 "In Elbasan, it is not uncommon to see a Christian priest and an imam drinking a mokka together in one of the little cafes near the old castle," says Ilir Hoxholli, an expert in religion and former head of the state religious authority

But Elbasan went a step further still, founding the country's first centre for interfaith co-operation. All religions are represented there, in an effort to advance the dialogue. As the centre's co-ordinator, Sokol Lulgjuraj, a member of the Catholic Church, points out, relations between the religions have always been good, but there was no proper dialogue.

"Through joint events, the centre now takes this co-operation to the next level," says Lulgjuraj.

The reasons for the amicable co-existence of religions in Albania can be found in the country's history, says Arben Ramkaj, the new centre's director. "The Albanians have always lived between East and West. They are European in terms of many ancient traditions, even though they are mostly Muslims. There have always been bridges of communication with the Catholics in the West as well. Our multi-religious identity has a distinctly national character. That is unique in all of Europe."

Is all this harmony in Elbasan too good to be true? "It should not be assumed that the religions meld together here and lose their distinct meanings. No, each preserves its own identity, but also respects the others," says Lulgjuraj. "Now, if we were to start avoiding contact with the other religions, that would be dangerous."

Religious encounters abound in Elbasan. Five festivals hosted by the various congregations originally had a more religious character, but have over the course of time turned into folk festivals for everyone. "In such troubled times, Elbasan is a model of success that is crying out to be copied throughout the Balkans and the rest of Europe," says Arben Ramkaj.

But dangers lurk even here. Islamists keep trying to disturb the religious tranquillity in the country. "We know that one of the five languages spoken by members of the so-called 'Islamic State' is Albanian. This shows that our region is significant for the IS, especially where there is a Muslim majority. Many people from Albania and Kosovo have gone to Syria to fight. The Theological Council of the Albanian Muslims therefore keeps reminding the imams that geopolitical developments must be kept separate from matters of the faith," stresses Ramkaj.

As a consequence of the coronavirus pandemic, the Osnabruck Morgenland Festival took place via YouTube for the first time – transporting us to new cultural regions through music. ... END_OF_DOCUMENT_TOKEN_TO_BE_REPLACED

Comments for this article: Loving their neighbours

A Higher View Of Brotherly Love

Some stories are true because they accurately describe a unique event that happened at a certain time and place. Other stories are events that once happened and have subsequently been dramatized by creative minds or faithful hearts. Archetypical stories that have been retold over the course of thousands of years are true; not because they actually occurred once; but because they continually reoccur in many places and times.

One such story, transmitted orally in both Arabic and Hebrew for very many centuries; and finally written down in the mid 19th century, in both languages and in several different versions; reveals a truth about the religious importance of true brotherly love.

The following archetypical fable illustrates how two holy places can be as closely connected as a pair of two lungs, even though they are far apart geographically and exist in different religious worlds. Some say this transcendent narrative happened in the generation when Abraham was born.

“Two brothers who inherited a ‘valley to hilltop’ farm from their father divided the land in half so that each one could farm his own section. Over time, the older brother married and had four children, while the younger brother was still not married.

One year there was very little rain, and the crop was very meager. This was at the beginning of a long term drought that would turn the whole valley into an arid, treeless, desert where even grain did not grow, and all the springs dried up.

The younger brother lay awake one night praying and thought: "My brother has a wife and four children to feed, and I have no children. He needs more grain than I do; especially now when grain is scarce."  So that night, the younger brother went to his barn, gathered a large sack of wheat, and left his wheat in his brother's barn. Then he returned home, feeling pleased with himself.

Earlier that very same night, the older brother was also lying awake praying for rain when he thought: "In my old age, my wife and I will have our grown children to take care of us, as well as grandchildren to enjoy, while my brother may have no children. He should at least sell more grain from his fields now, so he can provide for himself in his old age.

So that night, the older brother also gathered a large sack of wheat, and left it in his brother's barn, and returned home, feeling pleased with himself.  The next morning, the younger brother, surprised to see the amount of grain in his barn seemed unchanged, said "I did not take as much wheat as I thought. Tonight I will take more."

That same morning, the older brother, standing in his barn, was thinking the same thoughts.  After night fell, each brother gathered a greater amount of wheat from his barn and in the dark, secretly delivered it to his brother's barn.

The next morning, the brothers were again puzzled and perplexed. "How can I be mistaken?" each one thought. "There's the same amount of grain here as there was before. This is impossible! Tonight I will make no mistake—I will take two large sacks.”

The third night, more determined than ever, each brother gathered two large sacks of wheat from his barn, loaded them onto a cart, and slowly pulled his cart toward his brother's barn. In the moonlight, each brother noticed a figure in the distance.

When the two brothers got closer, each recognized the form of the other and the load he was pulling, and they both realized what had happened!

Without a word, they dropped the ropes of their carts, ran to each other and embraced.”

Christians and Jews say the hilltop is Jerusalem. Muslims say the valley is Makka.

I say that both views are correct.

God gave humans one heart to love God as individuals, and a pair of lungs to enable religious communities to continually recycle the holy spirit of God within human beings, among human communities, and between all humans and God.

When all those, both near and far, who revere these two sacred places as a standard, share it in love with everyone else who reveres it, then Abraham’s request for Allah to “make this a land of peace, and provide its people with the produce of the land” (Qur'an 2:126) will be extended throughout the world; and all the children of Adam, Noah and Abraham will live in Holiness, Peace and Prosperity.

END_OF_DOCUMENT_TOKEN_TO_BE_REPLACED
Social media
and networks
Subscribe to our
newsletter