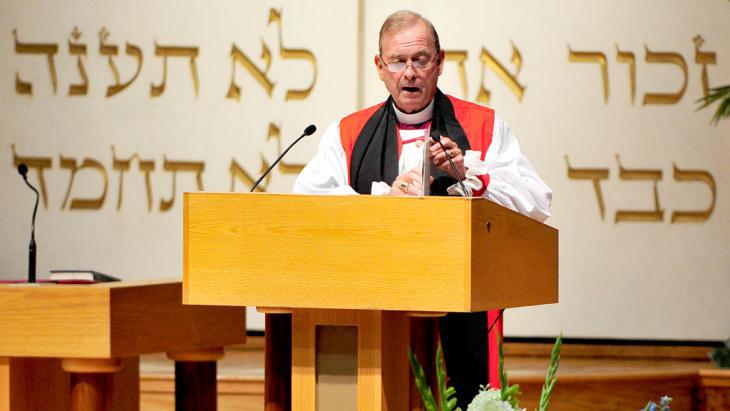 The missing ingredient in the Iran and P5+1 negotiations

In this essay, written before the conclusion of the negotiations in Lausanne, John Bryson Chane, former Bishop of the Episcopal Diocese of Washington, DC and senior advisor for interreligious dialogue for Washington National Cathedral, wrote of his regret that the voice of the global interreligious community was not heard in the negotiations between Iran and the P5+1 nations

A missing voice in negotiations between Iran and the P5+1 is that of the global interreligious community. It is astounding that this voice has either been intentionally muted by the American media or even worse discredited by our own government as a comparatively unimportant interference in negotiations.

According to a Pew religious poll published in 2010, eight out of ten people in the world identified with a religious group. There are approximately 1.8 billion who profess to be Muslim and over two billion professing to be Christian. Within these numbers are significant groupings of Muslim and Christian clerics, scholars and faith leaders who have been meeting quietly since the beginning of the new millennium to address common concerns threatening the very future of the human race and the ecological sustainability of the planet. A major focus of these meetings has been theological condemnation of the production and use of nuclear weapons.

Today, at least nine nations are known to possess nuclear weapons, with the lion's share held by the US and Russia. Humankind now has the ability to destroy almost every living thing on the planet in a few short moments.

Since 2000, there have been scores of meetings between Muslim and Christian religious leaders. Participants in these meetings carry a significant leadership role within the broad base of their respective communities. These meetings have been occurring quietly in many European countries as well as in the United States and Iran.

Governments in these countries have been aware of these meetings and have followed them closely. As the retired Episcopal Bishop of Washington, DC, I can affirm that I had encouraging conversations about my meetings in Iran with President George W. Bush and with US State Department officials. The Bush White House made it possible for President Mohammad Khatami of Iran to come to Washington, DC and preach at the National Cathedral in 2006 while I was bishop.

Nuclear weapons are a great sin

The Supreme Leader of Iran, Ayatollah Ali Hosseini Khamenei, has issued several fatwas unequivocally stating that Iran does not seek nuclear weapons. In Iran's Shia Islam, a fatwa issued by the Supreme Leader is binding on state policy. In February 2012, Ayatollah Khamenei publicly stated, "The Islamic Republic of Iran regards the possession of nuclear weapons as a great sin, in terms of thought, theory and religious edict and also believes that holding such weapons is useless, costly and dangerous."

Iran's Supreme Leader holds dual authority as the head of state and paramount religious authority for Iran's Shia Islam. Not acknowledging his fatwa is to disrespect his religious standing in Iran and to disrespect his standing as the nation's political leader. This disrespect along with a failure to trust has led to cynicism, blaming and exacting in negotiations with an eye-for-an-eye and a tooth-for-a-tooth mentality from both sides of the table.

This fatwa is particularly noteworthy because it is in parallel with declarations made by almost every major Christian denomination. The Episcopal Church has passed eight such resolutions. The Lambeth Conference of the Anglican Communion with 75 million members issued a 1998 resolution calling on all governments and the UN to sign a treaty ending production, testing, stockpiling and use of nuclear weapons.

Religions against the proliferation of nuclear weapons

Still, the authority of Christian faith leaders is quite different from that of their Iranian counterpart. There are those in government and those engaged in the P5+1 negotiation who dismiss the parallel between Ayatollah Khamenei's nuclear fatwa and the nuclear condemnations of Christian faith traditions simply because of the separation of church and state practiced in the West.

Nevertheless, as negotiations approach the eleventh hour, Christianity and Islam can be bridge builders. They can help build trust while the negotiators also insist on verification. At the same time, however, this requires that the negotiators have the courage to place importance on interreligious relationships – not instead of but in addition to nation-state diplomacy.

German Middle East analyst Guido Steinberg and television journalist Ulrich Tilgner have both published new books on the conflicts in the Middle East. Their analyses and their ... END_OF_DOCUMENT_TOKEN_TO_BE_REPLACED

On 27 March, Iran and China signed a 25-year accord intended to foster "strategic co-operation". Despite ongoing uncertainty over the deal's actual scope, content and chances of ... END_OF_DOCUMENT_TOKEN_TO_BE_REPLACED

In Grenoble, France, two professors have been pilloried in a dispute over the use – or otherwise – of the term Islamophobia. Is freedom of speech in jeopardy? By Stefan Dege and ... END_OF_DOCUMENT_TOKEN_TO_BE_REPLACED

END_OF_DOCUMENT_TOKEN_TO_BE_REPLACED
Social media
and networks
Subscribe to our
newsletter