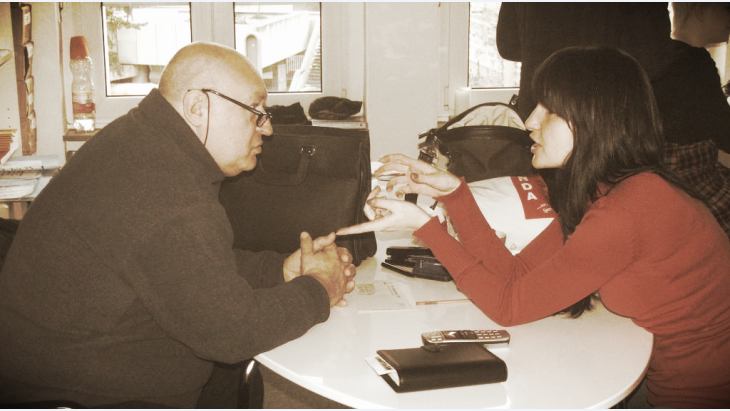 Interfaith Partnerships in Germany
Cultural Diversity as an Enrichment

In light of the increasing cultural and religious diversity in society, interfaith partnerships are nowadays no longer a rarity. How do these couples experience everyday life together and how to they deal with each other's different culture, traditions, and value systems? Julie Schwannecke provides some insight

Kyra is German, born and raised in the Bonn region. Omid spent his childhood in Kabul, Afghanistan and came to Germany with his parents and five brothers when he was eleven years old. Kyra and Omid met each other during their nursing training six years ago. The medical students have been a pair for the last two-and-a-half years.

The pair claims that they hardly have any conflicts as a result of their differing backgrounds and religions. Kyra has no problem with the fact that Omid, for example, does not eat pork as a Muslim. "I just can't cook any of my delicious recipes that I really love anymore," she jokes. "But, really, this is nothing that I find truly limiting. It is just a something about your partner that you have to take into account." "You try and find middle ground, and the differences really don't pose a barrier, because you can cope with them just fine," adds Omid.

The couple doesn't deny that certain habits and customs can seem somewhat strange at the start. Kyra, for instance, recalls the time that Omid's mother once performed a ceremony typical for elderly women in Afghanistan. She stood in front of the door swinging a pot full of burning incense and the couple was expected to walk through the smoke. "At first, I had absolutely no idea what was going on or what I was expected to do," she relates. "But then it was explained that this was a kind of blessing that the family bestows upon travellers so that they are protected along their way. It is sort of like wishing someone a good trip, but only more intense."

Yearning for religion and spirituality

"Another time, Omid told me that he always prays before he eats. And he actually does pray with his family before every meal." 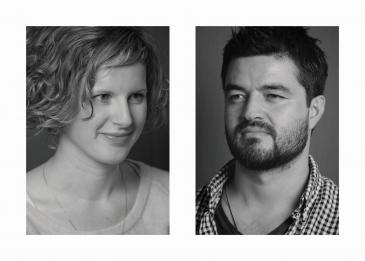 Mutual understanding as a basic precondition for interreligious marriage: Kyra and Omid

Does it bother him that Kyra doesn't pray every time as well? "When we are at my parents, then Kyra always prays too, but in her own way. But regardless of that, it is my opinion that it makes no difference what religion one follows. You keep your religion in your heart and not on your sleeve. This is what my parents taught me. So it is no big deal if someone doesn't pray."


Kyra regrets that religion plays such a small role in her own life. She relates how she also grew up in an interfaith family. Her grandfather was Jewish and her grandmother Protestant. Kyra was baptised as a Protestant, but wishes she could have had more contact with the Jewish faith and culture. It was her grandfather's decision not to pass on his faith to his children, probably in order to protect his family in a hostile anti-Jewish environment.

As such, Kyra has always experienced religion as something that is suppressed. She does occasionally go to church, but she nevertheless has the feeling that religion and faith are lacking in her everyday life.

This is why she appreciates all the more that Omid's parents have passed down their religion to their children in this form. This has allowed them to understand how a religion is lived day to day. "I would also like to live the way that they live their religion," she says.

Dealing with the challenges

Do their families have a problem with the religion or culture of their child's partner? "Quite the contrary," claims Omid. He finds that Kyra has been accepted very well into his family. He sees this as also having to do with Kyra herself, her openness, and her interest in getting to know his family and their culture. Both are of the opinion that mutual understanding is a basic precondition when two or more cultures come together. Only then can the other culture be perceived as an enrichment. "Your horizons are expanded and you learn many new things in addition to what you already know," finds Omid. 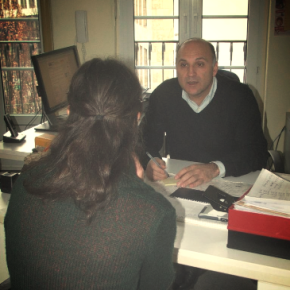 Hidir Çelik: "Openness towards the other culture and one's partner is important and helpful. This doesn't mean that you have to give up your own identity"

However, not all interfaith couples manage to solve their problems by themselves or find answers to those questions that emerge over time.


Hidir Çelik is the head of the Evangelical Immigrant and Refugee Work in Bonn and, in addition to his engagement with the issues of integration and migration, he also offers consultation to interfaith couples.

Çelik stresses that families of such couples often have a particularly strong influence on the relationship. Conflicts tend to arise when one partner is not accepted by the family of the other.

This can also be a burden on the children of an interfaith couple, as the rejection often includes the grandchildren. Even if a couple decides to break off contact with the parents, this is also a strain on the relationship. Only very few relationships can carry such a burden and many end up failing.

In order to resolve misunderstandings within the family, Çelik sees it as particularly important that both partners are open for mutual exchange, can freely express their doubts, and are willing to ask questions and then listen to the answers. This forms a foundation for every consultation talk and, in the end, for the functioning of interfaith as well as non-interfaith relationships.

In particular, many couples disagree on matters of bringing up their children, for instance, such as names for the children or what language should be learned first. Sometimes they argue over banal issues, such as when the children should have supper or go to bed. Most people want to raise their children in the same way and in the same culture as they were themselves. They want to pass on the values of their culture to their children. At the beginning of a partnership, these issues are usually not raised, because the couple is in love and really don't perceive these issues as a problem.

"In talks with parents, we try to convince them that their children should learn about both religions. Children can benefit from both religions and when they reach adulthood can decide for themselves where they belong. Even when parents can't resolve their problems and separate, we encourage them to bring up their children together and foster respect for both religions. Or both sides can also completely forego any sort of religious upbringing," he adds.

Sometimes the problem isn't even a religious problem. Even in cases where both partners are Christians, there are differences in culture or mentality, especially when it is a matter of bringing up children. Without a doubt, religions in whatever form have always influenced relationships – to a greater or lesser extent depending on one's cultural background. When the partners come from a "tolerant" cultural background, it is usually easier to resolve problems in the relationship.

Ultimately, it is not culture or religion that plays the major role, but how the couple gets along with each other. "Openness towards the other culture and one's partner is important and helpful. This doesn't mean that you have to give up your own identity. You don't always have to share the same opinion, but what is important is that you respect the position of your partner without wanting to change each other. Only then can real communication take place," explains Çelik.

Iranian author Fariba Vafi is adept at describing everyday scenes and concealing within them something ambiguous, in parts strange and grotesque. She writes novels – which have ... END_OF_DOCUMENT_TOKEN_TO_BE_REPLACED

Her grandparents are Jews – born in Tunisia and Algeria. Director Cleo Cohen has now broken the silence about this with a very personal debut. By Nadine Wojcik END_OF_DOCUMENT_TOKEN_TO_BE_REPLACED

Life imprisonment for crimes against humanity: that was the sentence handed down to Anwar Raslan in the world's first trial of a member of the Syrian torture system. Matthias von ... END_OF_DOCUMENT_TOKEN_TO_BE_REPLACED

Every year in December, the team at Qantara.de takes a look back at the articles that proved most popular with our readers. This year is no different. Here is a run-down of the ... END_OF_DOCUMENT_TOKEN_TO_BE_REPLACED

With his new album, "A Voice Keeps Calling Me", the Persian santur player Kioomars Musayyebi is building bridges from Iran across the Arab world to European early music. By Stefan ... END_OF_DOCUMENT_TOKEN_TO_BE_REPLACED

Former lawyer Said Haider has invented a chatbot for those seeking advice on anti-discrimination issues – Meta is the first chatbot of its kind in the world. In conversation with ... END_OF_DOCUMENT_TOKEN_TO_BE_REPLACED
Author:
Julie Schwannecke
Date:
Mail:
Send via mail

END_OF_DOCUMENT_TOKEN_TO_BE_REPLACED
Social media
and networks
Subscribe to our
newsletter