International Film Festival in Kabul
"We Are Postmodernism!"

​​At the opening ceremony, the German ambassador in Afghanistan praised the young screenwriters' amazing creativity: "The only chance for an accurate portrayal of reality in Afghanistan is if Afghan filmmakers show their living conditions themselves." Many international productions set in Afghanistan are in fact chock-full of stereotypes: burqas, noble savagery and exoticism seem to be the key ingredients of this apparently impenetrable alien culture.

Afghan screenwriters, in contrast, don't need to lift the veil – they grew up behind it. Dil Afroz Zirak for example, an Afghan woman who studied medicine and now directs films.

'Young Wishes' is her portrait of a 13-year-old girl who lives a life of drudgery, lugging heavy water canisters on the mountain slopes of Kabul to earn a few rupees. She never gives up laughing all the while, embodying a combination of poverty and dignity. That combination is hard for westerners to understand, but is a fact of life on the Hindu Kush.

The young Afghan filmmakers all have critical tales to tell: about forced marriage, the struggle for an education, lack of electricity and the promise of solar power. Happy endings are not the rule. And if they do crop up, one knows they won't last long.

On the second day of the festival, a bomb went off not far from the French Cultural Centre where the films were being shown, killing several people. Despite that, the location is safer than the half a dozen cinemas currently up and running again in Kabul. "In the 60s and 70s, the audience was made up of educated families, there were evening showings. Now, the cinemas are full of young unemployed men, rowdies, drug addicts and criminals," says Jawanshir Haidary from the Filmmakers' Union. 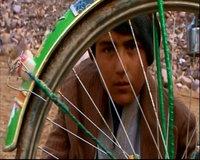 A bicycle wheel as a symbol for the wheel of life: scene from Alka Sadat's 'We are postmodernism'

​​Herat, the second-largest city in Afghanistan, does not yet have a cinema. "I'm 27 years old, and I've never been to a cinema in my own city," says the filmmaker Fahim Hashimi. "The Taliban turned the old cinema into a mosque and there were no films on there during the civil war."

The war on the Taliban and the hosts of international aid workers are more or less ignored in the Afghan films on show. "This is not the time to make an enemy of the government or NATO," explains Ali Karimi, who publishes a film magazine. "Apart from that, our filmmakers profit from commissions from the donor countries."

ISAF, for instance, has commissioned advertising films showing their soldiers working in harmony, shoulder to shoulder with the Afghan police and army. That is not always an accurate picture.

One of the few films to address the foreign presence in Afghanistan shows a heartless German. Dressed in a baggy coat and an old-fashioned German military cap, he happens to witness a murder, and approaches the victim. Not to help him, but to photograph the dying man and then simply walk away.

It's the donor countries' money that makes many of the films possible in the first place. But the example of the International Commission on Human Rights shows the downside of this practice: "For one of the films, the condition was that at least three articles from the international convention on human rights had to be included in the script, quoted verbatim by the actors. That puts huge limits on artistic freedom, of course," says Ali Karimi.

The heartless German: "Eid Moon behind the Window" by Qadar Aryayee

​​A more positive example of foreign funding is the 'Ateliers Varan' project, a French initiative for documentaries in developing countries. For the second time, up-and-coming Afghan filmmakers have received two months' training in screenwriting, camera work and editing. The project was initiated by the Goethe Institute in Kabul and its French counterpart. Several of the documentaries made as a result will soon be shown at festivals and on television in Europe.

The Kabul Film Festival serves up a healthy portion of hope. The Afghan filmmakers, for example, find it easier to encourage women to act in their films than they did two years ago.

The directors are swimming against the stream: most Afghans are Bollywood fans, in the cinemas or on DVD. Malek Shafi'i, the festival's organiser, has other goals: "I want the festival to become well known in the international arena. We have films from Pakistan, Iran and Tajikistan here. And we're using our new freedom to try things out."

Trying to find a common language 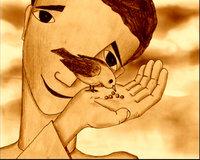 Scene from "Shelter", the first cartoon in Afghan film history

​​'Shelter', the first cartoon in Afghan film history, is one of the results. Short films such as 'We are postmodernism' by Alka Sadat or 'Rah/The Way' by Fahim Hashimi are the closest to western expectations of the art house genre.

On the other hand, western and Afghan filmmakers have not yet found a common language. In a discussion with representatives of the Franco-German television channel Arte, the head of Afghanistan's state film company expressed the wish that Arte would buy two to three Afghan films a year. The answer was a diplomatic but firm shake of the head. The expectations of structure, aesthetics and editing are too different, at least for television and the top film festivals.

An established star among Afghan filmmakers is Siddiq Barmak, whose drama 'Osama' put Afghan cinema back on the map in the west after the end of Taliban rule. He is currently making a new film, 'Opium War', in the Afghan provinces. According to rumour, it will be a satire on drug problems and the US military.

Interview with Siddiq Barmak
An Afghan View of Suffering
"Osama" is the first full-length film to emerge from Afghanistan since the fall of the Taliban regime. It is an attempt to come to terms with the country's history – and it already won a Golden Globe Award. Amin Farzanefar spoke with the film's director, Siddiq Barmak

Re-Inventing the Taliban
"Don't You Believe in Sharia?"
Sharmeen Obaid Chinoy, a young director originally from Pakistan, traveled back to her country to document the growth of Islamic fundamentalism there. Silke Kettelhake reports

END_OF_DOCUMENT_TOKEN_TO_BE_REPLACED
Social media
and networks
Subscribe to our
newsletter