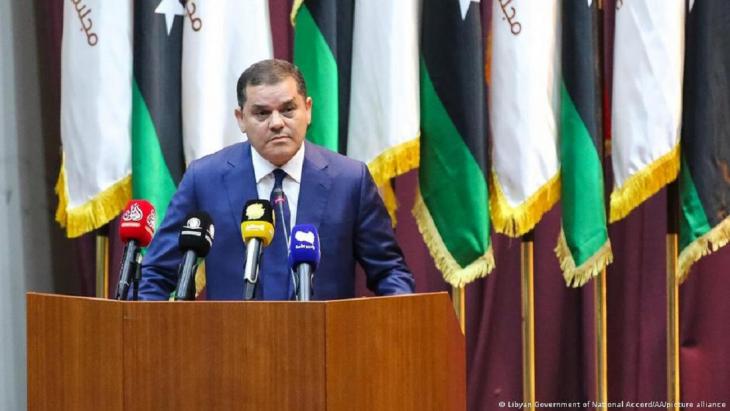 The Libya Conference will be held in Berlin on 23 June. Much has been achieved since the last Libya Conference in Berlin in January 2020. The ceasefire is holding, there is a united interim government for the first time and parliamentary elections are scheduled for 24 December. But the path ahead remains strewn with obstacles. By Karim El-Gawhary

It was an act laden with symbolism: Abdul Hamid Dbeibeh, who was only appointed prime minister of the new Libyan government of national unity in February, climbed onto a bulldozer and waved to the applauding onlookers. Then the machine rolled into action, clearing away a mound of earth that until last Sunday had blocked the main coastal road along the Mediterranean connecting Libya's west with its east.

As a result, transport links between the two regions – until recently at loggerheads – have now been re-established. "Today we declare the era of division and partition of our country to be over forever. We are one body. If one organ does not function properly, the other organs will also begin to fail," declared Dbeibeh, striking both a celebratory and cautionary note, as if he himself did not yet fully believe in his country's emergence into a new era of peace.

The entire event was also fitting for the political roadmap scheduled to be negotiated at the latest international Libya conference on 23 June in Berlin. At the invitation of the German government and the UN, the same participants will meet there that attended the first Libya conference in Berlin at the beginning of last year, i.e. Russia, Turkey, France, Egypt, Algeria, the United Arab Emirates and representatives of the European Union. U.S. Secretary of State Anthony Blinken has also confirmed his attendance. 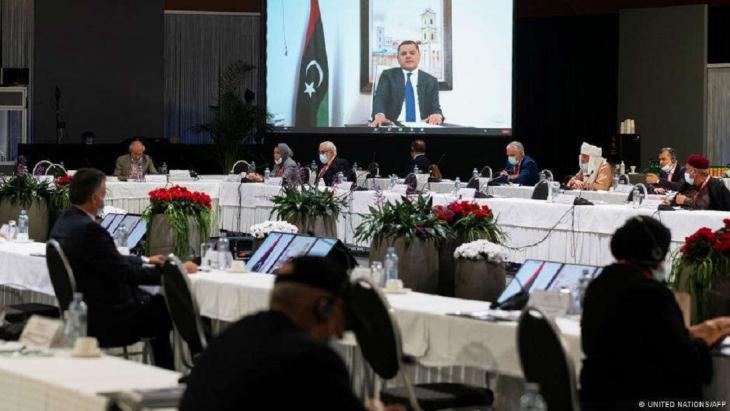 At the Libya Conference in Geneva chaired by the United Nations in February 2021, the representatives of the opposing parties agreed on the establishment of a government of national unity under the leadership of Abdelhamid Dbeibeh (see picture). He is to lead the country to parliamentary elections in December 2021. The next major issue is the withdrawal of all foreign mercenaries and military advisers, as well as the restoration of the state monopoly on power, writes Karim al-Gawhary. "Doubtless the conference in Berlin will produce many more declarations of intent. Yet as ever, the proof of the pudding will be in the eating – will all these good intentions actually come to fruition?"

Also new is that the Libyan side will be speaking with one voice this time, at least ostensibly, in the form of the new Libyan transitional government of national unity, which was only established in February. "The meeting in Berlin is an opportunity for us Libyans to participate as its main party. Libya as a whole has not been present at these meetings so far because of divisions within the country. Now we have the chance to participate as a government of national unity with a united vision and a clear strategy, and to support the decisions of the Berlin Conference and the UN Security Council," said Libya's new Foreign Minister Najla Mangoush during a visit to Cairo last Saturday (19/6/2021).

Much has been achieved since the last Libya conference in Berlin in January 2020. The ceasefire is holding, there is a united interim government for the first time and parliamentary elections are scheduled for 24 December. Major regional players like Turkey and Egypt have also come closer in recent months to finally stabilise the situation in Libya. Now the task in Berlin is to turn the whole thing around. Three major themes will dominate.

Top priority are the preparations and legal framework for the parliamentary elections scheduled for 24 December 2021. The second major issue is the withdrawal of all foreign mercenaries and military advisers. With foreign powers loath to cede their military influence in the oil-rich country, this has yet to take place, despite the fact that the decision was taken at the 2020 Berlin conference.

Turkish military advisors remain involved with the militias in western Libya and in the capital Tripoli. The east of the country is supported by Russian mercenaries, the Kremlin-affiliated Wagner security company and Sudanese fighters on the payroll of the United Arab Emirates.

Unifying the Libyan security apparatus and establishing a state monopoly on power is likely to prove even more difficult. Doubtless the conference in Berlin will produce many more declarations of intent. Yet as ever, the proof of the pudding will be in the eating – will all these good intentions actually come to fruition?

After the Berlin conference: Libya's war for war’s sake

Civil war in Libya: What is Russia really up to?

Algeria‘s regime is again cracking down on anti-fracking activists and the unemployed in the country‘s south. Yet EU countries remain keen to scale up their energy cooperation ... END_OF_DOCUMENT_TOKEN_TO_BE_REPLACED

Algeria's decision to unilaterally sever diplomatic ties with Morocco in August 2021 – days after the presidency announced in a statement their relations would be reviewed – was ... END_OF_DOCUMENT_TOKEN_TO_BE_REPLACED

Madrid's about-face on the Western Sahara conflict has enraged Algeria. Trade relations have been frozen unilaterally and a cut in gas supplies to Europe could be in the pipeline ... END_OF_DOCUMENT_TOKEN_TO_BE_REPLACED

Sultana Khaya, 41, has been peacefully resisting the Moroccan occupation of Western Sahara for many years. Because of her campaign to assert the self-determination of the Sahrawi ... END_OF_DOCUMENT_TOKEN_TO_BE_REPLACED

Since Spain abandoned its traditional neutrality towards the conflict in Western Sahara, Morocco has announced a "new phase" in relations between the two countries. But what is ... END_OF_DOCUMENT_TOKEN_TO_BE_REPLACED

An increasing number of government ministries in Algeria are announcing they will abandon French in future. They may be reacting to the mood among the population, but the move is ... END_OF_DOCUMENT_TOKEN_TO_BE_REPLACED
Author:
Karim El-Gawhary
Date:
Mail:
Send via mail

END_OF_DOCUMENT_TOKEN_TO_BE_REPLACED
Social media
and networks
Subscribe to our
newsletter