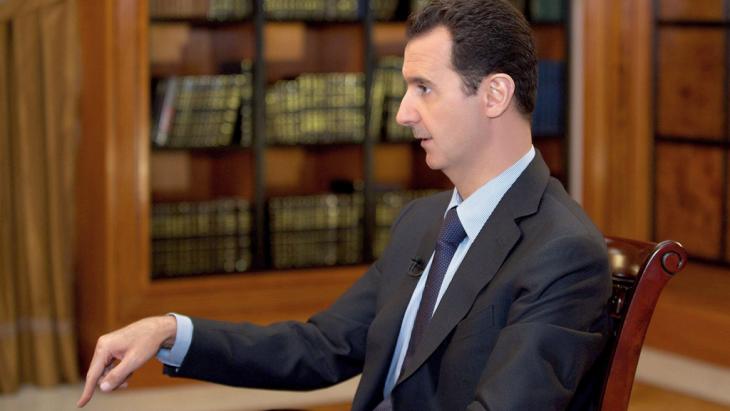 Above all, the West wants stability in Syria. Because he has managed to sit out everything that has happened in recent years, the Syrian dictator Bashar al-Assad seems to offer this very stability. But accepting the kind of stability Assad offers would mean having to forget the atrocities committed by his regime. A commentary by Bente Scheller

The Syrian regime is becoming socially acceptable once again. In recent weeks, European embassies have already been making overtures towards Damascus. Now, even top-ranking US diplomat Ryan Crocker, former ambassador to Syria, has said that it is necessary to hold talks with Syrian President Bashar al-Assad.

This illustrates yet again that the Syrian regime benefits from simply sitting things out and being unwavering in its use of excessive violence. The international community, which for two-and-a-half years has eloquently spoken out against the unrestrained killing, while at the same time standing passively by and watching, has finally decided to give in. No one talks about increasing the pressure on Assad any more.

For a short time, only a few months ago, things looked quite different. In August 2013, the USA came under pressure to intervene militarily in Syria. Emboldened by the fact that the international community played down the issue of the many previous chemical weapons attacks, claiming that they could not be proven, the Syrian regime seemed to overplay its hand by bombarding the outskirts of Damascus with poison gas. The death of over 1,000 civilians as a result of sarin gas poisoning caused international indignation. 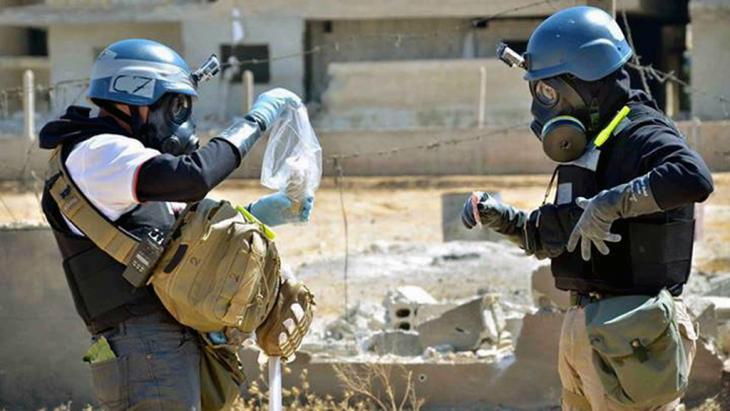 Uncertain outcome: "The agreement on chemical weapons negotiated between Russia and the USA, without consulting any Syrians, has been proclaimed worldwide as a success, even though its implementation could still be a long way off," writes Bente Scheller

This indignation was also evident among Assad's allies. From Iran, which had otherwise supported the regime without fail, came an irritated Tweet from President Hassan Rouhani, saying that the use of chemical weapons should be prevented at all costs. Even if this reaction served merely to avoid jeopardizing Iran's nuclear negotiations, these were indeed unaccustomed sounds coming from Tehran.

Wait it out and make concessions before it is too late

Yet despite all the harsh condemnations from the West, Assad took the leisurely approach. At first, the Syrian government acted as if absolutely nothing had happened. It was only after Moscow spread accusations through its own channels that the rebels were responsible for the chemical weapons attack that Assad's media team picked up the story. After a further four days in which the government engaged in sustained conventional bombing of the area affected by chemical weapons, the Assad regime declared itself ready to provide access to UN inspectors, who were already in Damascus.

When international intervention appeared imminent, Assad finally made concessions and pledged to give up his chemical weapon arsenal. Instead of holding the regime to account for its unthinkable deployment of weapons of mass destruction, the international community avoided even naming the initiator of the attack, let alone making good on its threat of intervention. The agreement on chemical weapons negotiated between Russia and the USA, without consulting any Syrians, has been proclaimed worldwide as a success, even though its implementation could still be a long way off.

Expected losses and the absence of any convincing success in the previous interventions in Iraq and in Afghanistan have led to a general aversion towards military involvement in conflicts in the region.The sober awakening after the high expectations elicited by the Arab revolutions has also contributed to the massive hostility against any participation.

The Syrian opposition also lacks a unifying leader, the result of decades of suppression and persecution. During the three years of the uprising in Syria, the opposition has yet to agree on any fundamental issues with respect to a possible future form of government. 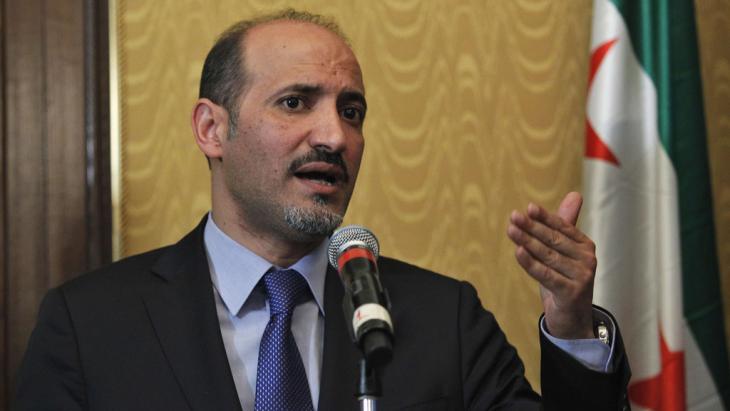 Deeply divided opposition: while the Syrian National Coalition under its leader Ahmad Jerba intends to take part in the Syrian peace conference in Geneva scheduled for 22 January, the rebels of the Free Syrian Army have rejected negotiations and said that they will not abandon their fight against Assad's troops

Those who are having to work in Syria under increasingly difficult conditions have not noticed any tangible improvements since the founding of the coalition. Hopes that international recognition of the coalition as the "legitimate representative" of the Syrian people would make possible increased political and humanitarian support in the liberated areas have been disappointed.

To this day, the UN co-operates with the Syrian government alone, even though this has meant that humanitarian aid has not reached large sections of the population. No exceptions have been made, even in the face of situations that threaten the entire region, such as the outbreak of polio. The WHO delivers vaccines to Damascus only, which means that the vaccines do not reach those who are particularly at risk or those attempting to flee to the neighbouring states or to Europe.

The uncertainty as to whether those players who are acceptable to the West will actually be strong enough to take Assad's place has frequently led to a highly simplified depiction of the situation – and one that has been propagated by the regime from the very beginning, namely that without Assad, the country would descend into chaos and turn into a breeding ground for Salafists.

What this theory completely ignores is that this horror scenario has been taking place over the past few years not despite Assad's actions, but as a direct result of them; not despite international efforts, but because the West refused to acknowledge the degree of brutality exercised in the Syrian conflict and missed the opportunity to support civil society and its supporters when there was still time.

Assad himself has not made any concessions whatsoever. The regime has continued to drop cluster bombs and incendiary bombs on residential districts and has been systematically starving whole swathes of the country, even while preparing for Geneva II.

All this makes it difficult to fully rehabilitate the dictator, as many would like. In order to make Assad appear in even a slightly better light, it would be necessary to present the crimes perpetrated by the Islamists – especially those crimes that have yet to be committed – as being even more horrific. Yet, in the decades of its existence, al-Qaida has been responsible for nowhere near as many victims as Bashar al-Assad has in just under three years. The difference being that he "only" lets people be murdered in his own country.

Assad has fully exploited the fear of Islamists both at home and abroad. Relatively early on, the Local Co-ordination Committees, which have assumed responsibility for administering those areas from which the regime has withdrawn, reported that the most radical Islamists did not need to fear any attacks by the Syrian army. Instead, the regime was letting them do as they pleased in the hope that they would drive the population back into Assad's arms. 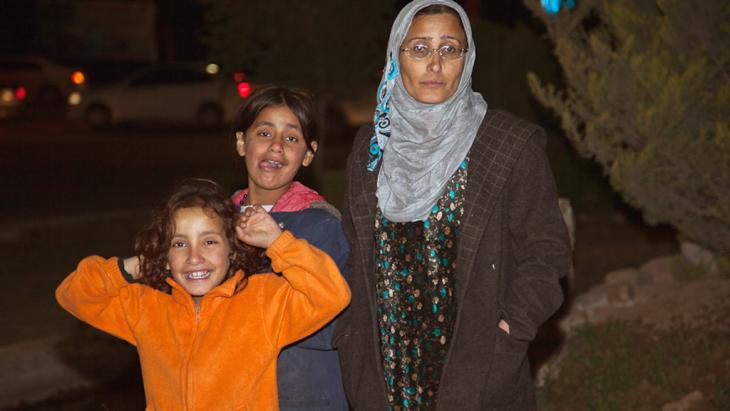 Civilians are the losers in this borderless war: almost half of all Syrians are now refugees either inside or outside the country's borders

This political calculation has yet to pay dividends. Acceptance of the Syrian regime has for the most part always been due to the perception that it was a guarantor of stability and security and the fact that although the vast majority of the population did not live well, it still managed to make ends meet. The regime has destroyed this image with its brutal response to the revolution.

Almost half of all Syrians today live as refugees either inside or outside the country's borders. There can be no doubt that in recent months many have left the north of Syria out of fear of the Salafists. Nonetheless, their number is small in comparison to all those who have fled Daraa, Homs, the outskirts of Damascus and the northern provinces due to constant aerial bombardment by the regime.

Yet what does the international community stand to gain from making Assad socially acceptable once again? Stability in the region? There have already been incidents on all of the country's borders, including the Syrian regime firing on a Turkish fighter jet over the Mediterranean. While the army doggedly attempts to hold every provincial capital, it gave up the northern border relatively early on, thereby opening the door for foreign fighters.

Despite massive support from his allies, Assad has been unsuccessful in defeating the opposition, which largely stands alone. How, then, is he supposed to become a guarantor of stability in the region? And what would be the benefit of him assuming this role?

There has rarely been a ruler so resistant to both external pressure and offers alike. After the war in 2003, no other country sent as many jihadists to fight against international troops in Iraq as Syria. And now, the US diplomat Ryan Crocker wants to talk with the Syrian leadership about, of all things, "the fight against terrorism and other common interests."

Even if Assad managed to prevail with the help of his allies and the compliance of Western states, over whom would he rule? From the very start of the uprising, the regime has been destroying the country's infrastructure. Nothing has been spared the carnage, neither schools nor courthouses, neither administration buildings nor hospitals – of which over 50 per cent have been destroyed. The havoc caused by the security forces and the henchmen of the Shabiha militia has opened up deep divisions in Syrian society. This has been a high price to pay for such a so-called victory.

Past attempts to reconcile logic and belief within Islam tend to be dismissed today – not because they lack merit, but because they were politically defeated, argues Mustafa Akyol END_OF_DOCUMENT_TOKEN_TO_BE_REPLACED

November 2022 sees the Arab world firmly in the spotlight with the COP27 in Egypt and the FIFA World Cup in Qatar. Public trust in MENA governments is weak, thanks to their ... END_OF_DOCUMENT_TOKEN_TO_BE_REPLACED

Thanks to climate change, the Middle East is heating up faster than any other part of the world, putting the region's ancient pyramids, castles, holy and other heritage sites at ... END_OF_DOCUMENT_TOKEN_TO_BE_REPLACED

After a two-year hiatus, the Arab League re-convened at the beginning of November in Algiers against a backdrop of uncertainty and discord. By Pierre Boussel END_OF_DOCUMENT_TOKEN_TO_BE_REPLACED

In the run-up to the COP27 global climate summit, hosted by Egypt in November, it is worth noting that little rainfall, aggressive heatwaves and worsening drought make the Middle ... END_OF_DOCUMENT_TOKEN_TO_BE_REPLACED
Author:
Bente Scheller
Date:
Mail:
Send via mail

END_OF_DOCUMENT_TOKEN_TO_BE_REPLACED
Social media
and networks
Subscribe to our
newsletter