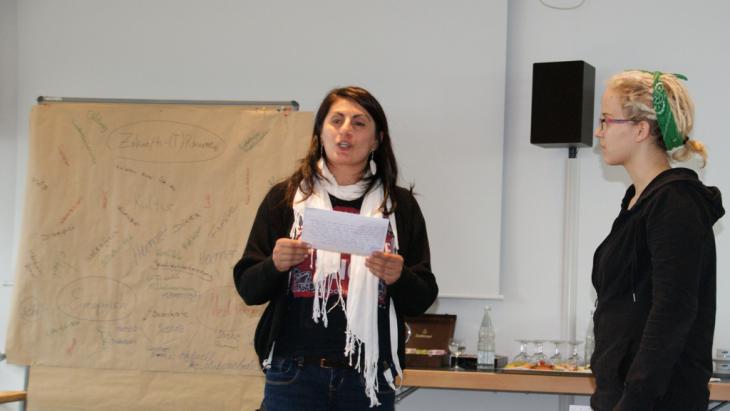 Last October, the organisation Netzwerk politik|atelier organised a one-day poetry slam workshop entitled "Slamming für 2020" in Bonn for emerging talented poetry slammers from the Arabic-speaking world and Germany. At the end of the workshop, the participants presented their future visions of how people can live together on both sides of the Mediterranean. By Fabian Pianka

The four poetry slammers are waiting nervously to begin. They all belong to different generations and come from different countries on either side of the Mediterranean. What they have in common is the desire to present their perspectives of Euro-Mediterranean realities and to reveal their "Euro-Mediterranean Poetry Dreams" through their own writing.

Using lyrical language and pointed performance, the basic ingredients of slam poetry, the four women – Farah, Anne, Zeynep and Hatice – also want to enrich the dialogue between cultures. And that's just what they did at this event, which took place at the Deutsche Welle building in Bonn on 16 October.

Zeynep, who is from a Turkish-German background and is the first to perform, riffs on the discrepancies between appearance and reality in Turkey and Germany. She talks about a "facade" that is kept up in both cultures. But "where the sun shines, there is shadow," she sums up.

The right to be different

Hatice, who has lived in Germany since 1964, uses her slam to emphasise every individual's right to be different, regardless of skin colour or culture. She insists on the importance of having an opinion and taking responsibility for voicing it.

The youngest participant, Anna, is from Germany. Her slam sums up her thoughts about refugees and migration. "You never wanted to be powerful and rich, all you wanted was freedom and peace," she slams. "Plastic Boat Metre" is the title of her work.

Farah, whose parents come from Morocco, is a student of philosophy and German literature. She slams about her two "Homelands" – the title of her piece – which compete with each other in her mind like "cynical poison", but she also talks about the resulting "dreams that create spaces". There is a sense of inner conflict that also offers opportunities. Farah complains of cramped politics, racism and sexism on both sides of the Mediterranean. That's why she sees it as her task to build "a bridge between Occident and Orient".

The slam performances were the result of an intercultural writing workshop run by Netzwerk politik|atelier. Led by the speech trainer Thomas Pries and the drama teacher Ari Nadkarni, the slammers wrote their texts and prepared for the evening performance event in a creative atmosphere. 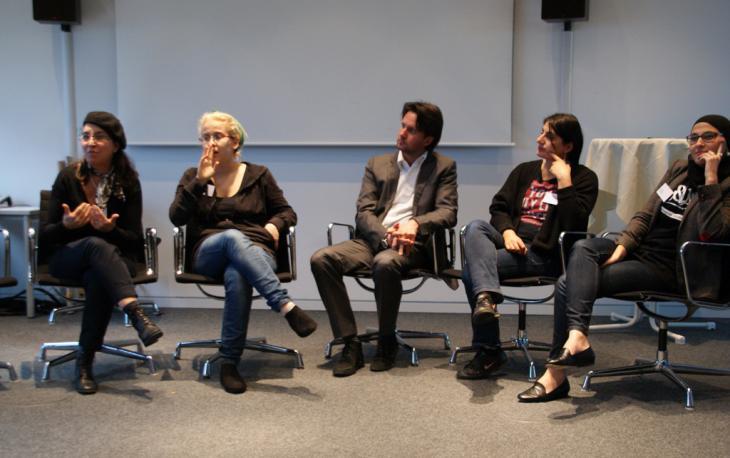 The panel for the discussion that followed the "Slamming für 2020" poetry workshop in Bonn. The new texts presented at the end of the workshop provided insights into different perceptions on both sides of the Mediterranean, helping to deconstruct clichés and prejudice

Both coaches were particularly interested in addressing interculturality and globalisation through poetry. They wanted to draw attention to everyday common ground and differences between European and Mediterranean cultures and the conflicts and opportunities that could possibly arise from them.

The discussion following the slam itself focused mainly on current events in the Arab world from the threat posed by Islamic State (IS) and the conflicts in Syria and Iraq to the question of dealing respectfully with refugees.

Over and over again, however, the significance of the effect produced by poetry and the "democratic participatory" approach of poetry slams were highlighted. Poetry slams are making poems "trendy" and "socially acceptable" again and attractive for young people too, said one person who took part in the discussion.

Raising awareness of the Mediterranean

The project, which was run as a co-operation between Deutsche Welle and Netzwerk politik|atelier, was implemented as a network activity of the Anna Lindh Foundation. Active in 42 member states, the foundation is this year holding a series of events entitled "Begegnungs(t)räume: Mittelmeer vor Ort" (Dreams of encounter: The Mediterranean in Situ), focusing on "spaces for encounter and the (un)fulfilled dreams of encounter in Euro-Mediterranean Co-operation".

Following this lead, one of the aims of the "Euro-Mediterranean Poetry Dreams" project is to raise awareness of the subject of the Mediterranean and call attention to the diverse lives and ways of thinking on both sides of the sea.

The project was inspired by a German-Tunisian initiative. During a Cross Culture placement funded by ifa (Institut für Auslandsbeziehungen, German foreign-relations organisation), Lena Schröder met Farah Bouamar, who was active in the German-Muslim poetry slam group "I,slam". The two of them decided to launch a German-Tunisian literary competition in Tunis. And so the "A'slama" project was born. "A'slama" means "Hello" in Arabic but also sounds not at all unlike "a slammer", i.e. a poetry slammer.

Tunisian students of German came together in Tunis, looking at the changes in Tunisian society after the fall of the long-reigning autocrat Ben Ali in funny or melancholy slam poetry. Farah was so impressed by the event that she immediately agreed to join in on a continuation in Germany.

Asked about her motivation for slamming, Moroccan-born Farah says: "Poetry can speak to your heart and mind at the same time, make people part of a story, a discourse, an idea and offer them a new, perhaps critical approach to or a new perspective on all kinds of subjects."

Slamming for dialogue between the cultures

The first poetry slams, held in the USA in the 1980s, sparked off a regular "poetry boom". The rhythmically spoken poems now have an increasing appeal for audiences in other countries. They give younger people in particular an opportunity to make creative statements on political and social subjects.

In Germany, "I,slam" is one of the best-known initiatives involving young Germans with Arab roots. It aims to provide a platform for young Muslims to express their opinion and be heard. The idea has been very well received, with members of "I,slam" now welcome guests at events around Germany and worldwide.

Performative events such as poetry slams are a simple but effective way to reach people and forge contacts between them. They often allow slammers to address intercultural misunderstandings and prejudices in a more relaxed way than workshops or seminars. That helps to build trust, one of the most important prerequisites for successful intercultural dialogue.

Breaking down prejudice and ignorance

Poetry is no longer only a product of ivory towers; it is written on the streets, in public spaces, in backstreets or online. That much became clear not only during the recent uprisings in the Arab world, where thousands of people chanted together in Tunis or Cairo against the repressive authorities – and were successful.

In our world too, which is increasingly characterised by a blending of cultures, slam poetry can facilitate cross-cultural learning, foster greater empathy and solidarity between cultures, and thus consolidate intercultural competencies. The project "Euro-Mediterranean Poetry Dreams" will be continued with this in mind so that dreams create spaces – from Germany to the Arab world.

The change in U.S. president is also having an impact on the conflict between Turkey and Greece. Since the USA has started to play the Greek card, the strategic situation in the ... END_OF_DOCUMENT_TOKEN_TO_BE_REPLACED

Years ago, the International Holocaust Remembrance Alliance formulated how hatred of Jews can be recognised. Now a new definition is causing controversy. By Sarah Judith Hofmann END_OF_DOCUMENT_TOKEN_TO_BE_REPLACED

On 15 June, the "Islamkolleg" in Osnabruck officially launched its new training programme for imams in German. The college is intended to prepare Islamic theologians for their ... END_OF_DOCUMENT_TOKEN_TO_BE_REPLACED

For centuries, the great classical Persian author Hafez has inspired German writers. Translations, adaptions and homages have been created in his wake, and the process continues ... END_OF_DOCUMENT_TOKEN_TO_BE_REPLACED

Business in the Moroccan city of Tangiers is booming due to its location at the nexus of global trade routes. But many locals are failing to reap the benefits. What they crave ... END_OF_DOCUMENT_TOKEN_TO_BE_REPLACED
Author:
Fabian Pianka
Date:
Mail:
Send via mail

END_OF_DOCUMENT_TOKEN_TO_BE_REPLACED
Social media
and networks
Subscribe to our
newsletter