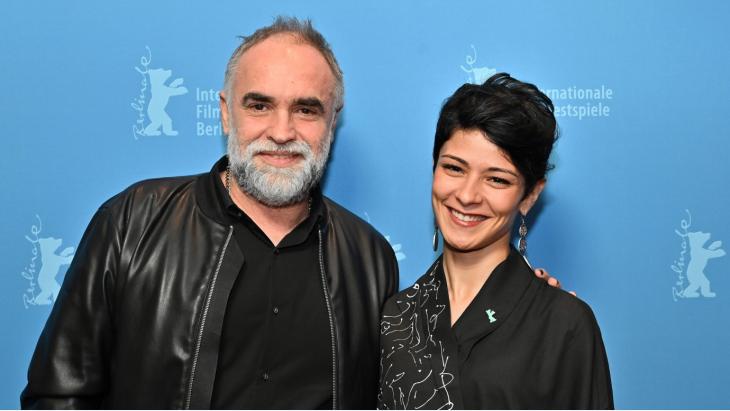 International Women’s Day
Ainouz' "Nardjes A." – hope as a form of resistance

Focussing on the Algerian protest movement, "Nardjes A." by Karim Ainouz, is about the universal power of hope to change the social and political status quo in the Maghreb country. By Rene Wildangel

This film had an entirely impromptu beginning. Karim Ainouz, who is appearing at the Berlinale for the third time, had gone to Algeria for a different film project, which should also be finished in the near future. It was the story of his grandfather, who came from Kabylie in northern Algeria, and played a significant role in the 1962 Algerian war of independence. He was later arrested by his own fellow combatants and finally driven into exile.

But then, on 22 February 2019, large-scale protests began against the fifth term of President Bouteflika. Ainouz was impressed by the hundreds of thousands of people who wanted to begin a new era following decades of stagnation and oppression.

He meets Nardjes, a waitress at Maghreb Cafe, through a mutual friend. An impressive, cool, self-assured woman, she is an amateur actress, a comedian and – at this time – first and foremost a political activist. The exciting days when the big demonstrations are held, especially the Friday demos, begin at dawn for her, as she prepares for long hours of protest. Ainouz decides to follow her for an entire day, the third Friday of the protests on 8 March 2019 – International Women’s Day. And women are omnipresent at the demos.

Ainouz not only displays great respect for his protagonists; he shows solidarity with them, too. That was the case with his 2018 film Central Airport THF, as he documented both the refugees’ unbearable wait and their resilience. And it is also true of Nardjes A., which could hardly be more different: fast-paced, energetic and euphoric. At the start and end of this day, Algiers is relatively quiet and peaceful, but in the time between, the viewer is witness to a political earthquake. And Nardjes is one of its epicentres.

Shaped by the black decade 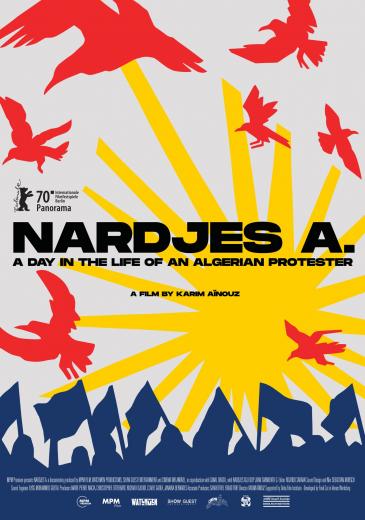 The film already stands up as an impressive portrait of this extraordinary young woman. But its power also lies in its function as an emblematic testament to the power of human protest. A sense of community and a vision of a better future suddenly erupts into being here – even if the path to reach this vision may be unclear, or even unlikely.

Nardjes believes in this force and expresses it with every fibre of her being. She, too, is the granddaughter of anti-colonial veterans of the 1962 revolution, who also fell victim to the movement’s later failure. Her childhood, Nardjes says in the film, was entirely shaped by the leaden "black decade" of the civil war.

Now she is finally starting something new. Together with hundreds of thousands of others, who pour out into the otherwise deserted streets and public squares, shouting out long-held frustration, singing revolutionary songs, spreading a peaceful, positive energy: the movement was accordingly dubbed the "revolution of smiles".

They often give the impression of a carnival, or of enthusiastic fans cheering their football team on to victory.  And these crowds have a lot to do with football: "Before the protest movement, the stadiums were the only places where you could express protest," Nardjes says in Berlin. And in fact the Ultras played an important role both within and outside Algeria.

The hymn of the protests, La Casa del Mouradia, started life in the stadium of the capital city’s club USM Alger.

As a film, the documentary is a masterpiece: the emotional power of image and sound are deployed perfectly. Ainouz captures the protests with incredibly strong images – and all using his smartphone. "It would have been impossible to get a filming permit, in any case."

"Journalists with cameras were extremely unpopular at the protests," says Ainouz. "As a rule, they were allied to the regime." The smartphone allowed him to film up close while being protected by the crowds; there were with screens being held aloft everywhere.

In recent years, a lot of films have been made using material filmed on smartphones, not least due to the circumstances of flight from war and repression.

Footage that is worth seeing, because of the unique first-hand testimony it represents, but also a lot that is shaky, brief, taxing to watch.

Ainouz’s film demonstrates how incidental the technology becomes when it is used by a true master of his medium. Even the establishing shots are magnificent: Ainouz films from above as a dense crowd of people moves seemingly without purpose, like a shoal of fish, in black and white. Then, very slowly, the colour is faded in and individuals emerge in a variety of colour and shapes.

The sound has been even more heavily edited in post-production than the images have. The impressive energy of the revolutionary songs, and the hammering beats when Nardjes goes out dancing at the end and all the tension falls away make a substantial contribution to the intensification of the atmosphere.

A universal film about the power of humanity

What does this film mean to you, Nardjes is asked after the screening. She is so emotional that she can hardly speak. The film means everything to her. “A gift to my country,” she says. President Bouteflika stepped down in April 2019, but the old guard has not followed suit, even after the election in December 2019. Grounds for pessimism?

Almost ten years have passed since the desire for revolution made its power felt in Tunisia and on Cairo’s Tahrir Square. And a few years later, the hope that things would change was largely quashed in wars and the restoration of authoritarian regimes. The revolution’s problems, the protesters’ lack of political organisation, the relationship of the nation’s capital Algiers to the provinces, the regime’s tremendous repression – none of these issues are addressed in the film, and this is a deliberate choice.

"The first question a lot of people ask after the film is about the repression, because it isn’t shown. Why is that the case?" says Ainouz. In his view, the other side of this story, the negative forces and the narrative of authoritarians and (so the director says) fascist movements growing stronger all over the world, are usually given too much space. He wants to take a stand against this trend with his film. Hope is not a naive or passive concept to Ainouz. "Joy and hope can be a form of resistance."

This makes Nardjes A. a universal film about the power of humanity and the possibilities of resistance against unjust conditions. Ainouz is a radical humanist and political filmmaker who approaches the issues of our age with great humanity and sublime images. His mission has only just begun.

Sultana Khaya, 41, has been peacefully resisting the Moroccan occupation of Western Sahara for many years. Because of her campaign to assert the self-determination of the Sahrawi ... END_OF_DOCUMENT_TOKEN_TO_BE_REPLACED

Since Spain abandoned its traditional neutrality towards the conflict in Western Sahara, Morocco has announced a "new phase" in relations between the two countries. But what is ... END_OF_DOCUMENT_TOKEN_TO_BE_REPLACED

An increasing number of government ministries in Algeria are announcing they will abandon French in future. They may be reacting to the mood among the population, but the move is ... END_OF_DOCUMENT_TOKEN_TO_BE_REPLACED

Russia's ranking on the World Press Freedom Index has fallen again over the Kremlin's wartime censorship of the Ukraine conflict. From Myanmar to Mexico, journalists continue to ... END_OF_DOCUMENT_TOKEN_TO_BE_REPLACED

"Aboogi", on the City Slang label, is the latest release from Imarhan. Hailing from southern Algeria, Imarhan are one of the many bands that have emerged from the Tameshek ... END_OF_DOCUMENT_TOKEN_TO_BE_REPLACED

END_OF_DOCUMENT_TOKEN_TO_BE_REPLACED
Social media
and networks
Subscribe to our
newsletter