Skip to main content
As over 200 volunteers have already died, many lives have been lost in this dangerous line of work. Often times, this is due to the "double tap" attacks by the Syrian and Russian forces. Such despicable tactics have been well-documented and are a crime against humanity.
Never falter
On 11 November 2019, the White Helmets suffered another loss: James Le Mesurier fell from a balcony close to his home in Istanbul. A few days before, the official Twitter account of the Russian foreign ministry had denounced him for being a spy. As such, the incident takes place in the wider battle for truth in Syria.
Le Mesurier founded Mayday Rescue, which trained White Helmet volunteers to rescue victims of bomb attacks. He was a former military professional with the British army and had valuable knowledge for such rescue missions. 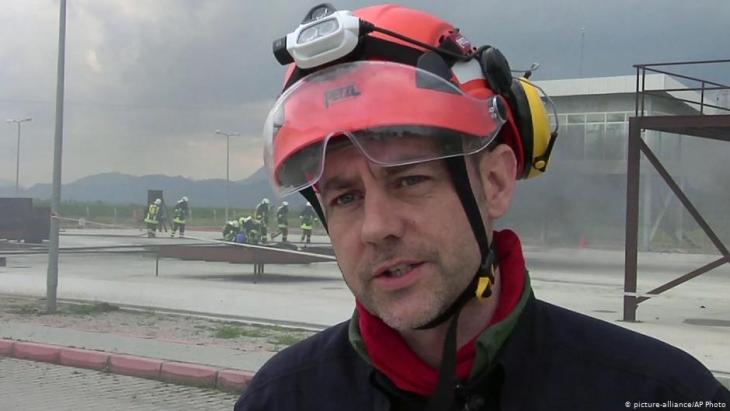 Le Mesurier's legacy lives on: when a bomb falls in Syria, no fire truck or ambulance will come. The only people who will come and rescue civilians are people like Muzna and the female White Helmets on the ground in Syria, who save lives and help their communities, despite all threats they face. "The situation is so desperate inside Syria, we don't have time to explain ourselves all the time, we just keep on working," says Muzna

Looking beyond Idlib towards the whole country, Muzna has a clear message: "We are ready to work anywhere in Syria, also in regime controlled areas. They refuse for political reasons, but we are always ready to serve Syrians no matter where they live." This statement is astonishing given that Assad considers the White Helmets terrorists that must be defeated by force. It speaks to the commitment the White Helmets have to helping civilians anywhere in the country, for example by demining soil that is contaminated with all kinds of weaponry.

This work is ever more urgent because the Russian government has declared Syria the testing ground for their newest military acquisitions. The Russian defence minister proudly declared that over 200 weapons have been tested in Syria. It will require years of work to make the soil safe again. Against this backdrop, the legacy of James Le Mesurier extends further than the people who knew him. It lives on in people like Muzna and the female White Helmets on the ground in Syria, who save lives and help their communities, despite all threats they face.

When a bomb falls in Syria, no fire truck or ambulance will come. The only people who will come and rescue civilians are these volunteers, men and women, and this is the simple truth in this horrible war. In the words of Muzna: "Our work explains our position and our perspective, it speaks for itself. The situation is so desperate inside Syria, we don't have time to explain ourselves all the time, we just keep on working."

Anna Fleischer is programme coordinator at the Heinrich Boll Foundation's Beirut office. She is particularly interested in gender justice and grassroots movements, with a special focus on Syria

Violent clashes between parts of the Sudanese security forces and the ominous influence of external financiers of the paramilitary "Rapid Support Forces" (RSF) are endangering the ... END_OF_DOCUMENT_TOKEN_TO_BE_REPLACED

The battle for Idlib is likely to be the last, bloody conflict in the Syrian war. Refugees have fled the city in droves, but Huda Khayti is determined to stay and fight for her ... END_OF_DOCUMENT_TOKEN_TO_BE_REPLACED

The recent escalation of violence in Idlib is also a result of the increasing tensions between Turkey and Russia. The victims are those in Idlib, caught up in a hopeless situation ... END_OF_DOCUMENT_TOKEN_TO_BE_REPLACED

The 2015 Joint Comprehensive Plan of Action with Iran is in jeopardy. European governments should use the JCPOA’s dispute-resolution mechanism both to pursue immediate measures to ... END_OF_DOCUMENT_TOKEN_TO_BE_REPLACED

With "Assad or We Burn the Country", Sam Dagher has furnished the world with some genuine ammunition against the Syrian regime's on-going campaign of disinformation. The only ... END_OF_DOCUMENT_TOKEN_TO_BE_REPLACED
Author:
Anna Fleischer
Date:
Mail:
Send via mail

END_OF_DOCUMENT_TOKEN_TO_BE_REPLACED
Social media
and networks
Subscribe to our
newsletter