The recapture of territory held by "Islamic State" in Sirte, in the heart of the country, in December 2016 after months of fighting was one of the few successes to date. Meanwhile it is uncertain whether the days of IS in Libya are actually numbered. As the internal intelligence system once set up by Gaddafi has practically collapsed, there is no real capability to seriously assess the operational strength of IS, Badi points out.

The weakness of the state

"Many say that we are living in Libya in a post-IS era. Others talk about IS coming back. The problem is that the conditions that once favoured the rise of IS haven't changed," he explains. And he enumerates them: a weak state, the inability to co-operate with international organisations on counter-terrorism measures and little capacity for proper border control.

An additional problem he notes is that the groups that fought against IS in 2016 suffered great losses in the process, but were given no recognition for their efforts. Should IS become stronger once again, it would be even more difficult to mobilise internal Libyan forces against it, in part due to their fear of being weakened militarily in the inner Libyan power struggle between the two governments, he says. 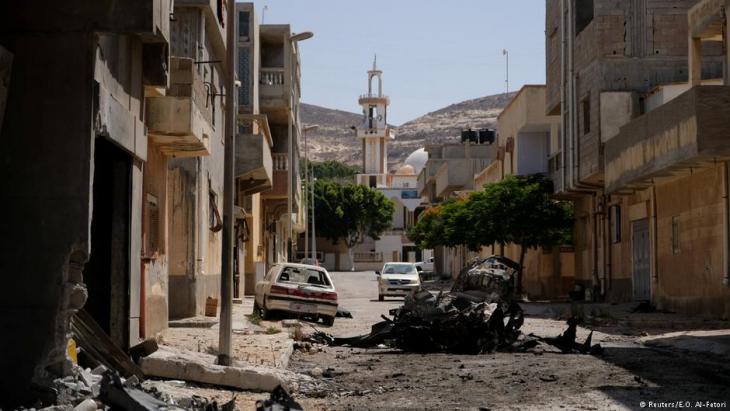 One victory for Khalifa Haftar: the renegade general announced the "liberation" of the city of Derna in eastern Libya at the end of June. The coastal city had previously been ruled by an alliance of Islamists and jihadist militias, including groups close to the terror network al-Qaida. They are hostile to both Haftar and the jihadist militia Islamic State (IS)

The way that Europe currently sees Libya merely in terms of a transit point for migrants and refugees is a big mistake, warns Badi. The only way to reverse this trend in his view is to politically stabilise the country and to rebuild its economy so that migrants from Africa can find work again in Libya, as has traditionally been the case.

The attempt to shift the border of the EU to Libya and to support individual forces there in stopping migrants is a policy that is doomed to fail, of this much he is sure. As an example, Badi cites European support for the Libyan coastguard. "The problem is that the coastguard itself is involved in human trafficking. On the one hand, they receive aid from Europe so that they can pick up refugees at sea and bring them back again. But on the other hand, they also work with the smugglers, or are even active themselves. So they profit twice over," he explains.

The UN Security Council has imposed sanctions on two of the chief coastguard commanders. One of them is Abdel Rahman Milad, who commands the coastguard in Zawiya, one of its most active units, which is openly supported by the EU. This is enough to show how unsustainable this process is.

Badi does not think much of the so-called landing centres for migrants and refugees that are being discussed in Europe. "These are like just putting a plaster on a gaping wound. And I'm not always sure whether the plaster is applied on the right spot," he says, laughing loudly into the phone at this European approach.  "None of the North African countries is prepared to co-operate, certainly not Libya," he is sure.

As strategically important as Libya is for Europe, most of the policy proposals miss the mark because they fail to come to terms with the realities on the ground. And this will continue to be the case as long as discussions in the capitals of Europe continue to focus on which plaster to stick where in Libya.

Political analyst Taqadum al-Khatib argues that Egypt can, in co-ordination with its European partners, develop a common vision to solve the complex conflict in Libya. For this to ... END_OF_DOCUMENT_TOKEN_TO_BE_REPLACED

Libyans have mixed feelings about the EU. On the one hand, they admire what Europeans have achieved, but on the other, they feel let down. Moutaz and Walid Ali report from Tripoli END_OF_DOCUMENT_TOKEN_TO_BE_REPLACED

Libya is in turmoil and no political solution is in sight. The EU's inability to take concerted action in the country, meanwhile, is being exploited by third parties, such as ... END_OF_DOCUMENT_TOKEN_TO_BE_REPLACED

In the wake of the Arab Spring, not one Arab dictator has faced charges for creating a police state and inducing terror among citizens. Similarly, none has been prosecuted for ... END_OF_DOCUMENT_TOKEN_TO_BE_REPLACED

Facing the risk of exploitation, violence and torture, aid groups warn Libya is not a safe country for refugees. They argue that is reason enough for the EU not to send asylum- ... END_OF_DOCUMENT_TOKEN_TO_BE_REPLACED

In their field journal “The Crack” photographer Carlos Spottorno and journalist Guillermo Abril report the unfolding of Europeʹs migrant crisis from Africa to the Arctic over the ... END_OF_DOCUMENT_TOKEN_TO_BE_REPLACED
Author:
Karim El-Gawhary
Date:
Mail:
Send via mail