Interreligious "Eid Table" in Belgrade
One God, Many Names

Muslims in the Serbian capital invited their Jewish and Christian neighbours to celebrate Eid ul-Fitr and break the fast with them at the end of Ramadan. Although Islam does not meet with ready acceptance in Belgrade, the various religions do live quite happily side by side most of the time. Danja Antonovic reports

​​ "We Muslims are happy to live in Serbia and to serve our God here, among friends and neighbours," says a man who looks uncannily like an enhanced version of George Clooney. He is tall and slim, with an athletic build and classic facial features; the spitting image of the Hollywood actor. He stands on a small stage decorated with a colourful Oriental carpet and framed by green and white balloons.

This man, who is also dressed in a long, black robe and wears a white turban, is Muhamed Jusufspahic, the most senior mufti of the Serbian Islamic Community. He opens the second "Eid Table" to be held in the heart of Belgrade with the words "Bayram Mubarak olsun!" Over one thousand citizens of Belgrade have come to the event and their applause lasts quite some time. All of them – Muslims, Orthodox Christians, Jews and Catholics – have come to celebrate Eid ul-Fitr together.

Jusufspahic also addresses his words to the head of the Muslim community of Sandzak, which is based in southern Serbia. Muamer Zukorlic, the most senior mufti in Sandzak, lives in Novi Pazar, which is very close to Kosovo, where 80 per cent of the population is Muslim. 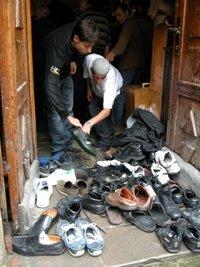 "People hurriedly wash their feet in the courtyard; shoes, taken off in haste by latecomers, block the doorway." The invitation to attend the "Eid Table" was taken up by as many as 1,000 people from a variety of religious backgrounds in the Serbian capital

​​ Zukorlic refuses to acknowledge the community in Belgrade and feels bound to the Muslims in Sarajevo, Bosnia and Herzegovina. He regularly criticizes the Belgrade government's activities in Sandzak and calls for foreign observers to support the Muslims there. He even speaks of the imminent autonomy of the region, which is situated in the north-eastern corner of Montenegro, in south-western Serbia, and part of which is situated in Kosovo.

Muhamed Jusufspahic, on the other hand, is calling for the integration of Muslims into Serbian society. However, apart from the unequivocal nature of the words Jusufspahic addresses to those present and to his absent counterpart, this day is not about politics.

The Old Quarter of Belgrade is rather small. The Turkish fortress of Kalemegdan sits majestically above the place where the River Sava joins the River Danube. To this day, the quarter is known by the Turkish name "Dortjol". What is now Serbia was part of the Ottoman Empire from the fifteenth century onwards. The minaret of the Bajrakli mosque on Gospodar Jevremova Street has towered above the rooftops since 1575.

When the mosque was built, there were another 273 mosques in the city. Only one of them remains; it serves 200,000 Muslims. Most of the Islamic places of worship were destroyed during the Serbian wars of liberation in the nineteenth century or were transformed into secular buildings and churches.

In a certain sense, the area around the mosque is multicultural or multireligious: the headquarters of the Jewish community and the synagogue are just around the corner, and the Orthodox cathedral is not far away. The fact that all three religions built their places of worship in such close proximity to one another shows how tolerant Belgrade was down through the centuries.

Attack on the mosque

But tolerance in the city experienced a setback in 2004 when right-wing youths set fire to the Bajrakli mosque one night in reprisal for the convents and monasteries that had been burned down by Albanians in Kosovo. To this day, those responsible for the fire have not been charged, nor has the mosque been restored. 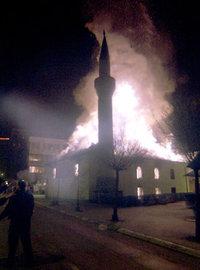 Interreligious tension: in 2004, young people set fire to the Bajrakli mosque in Belgrade in reprisal for the burning down of convents and monasteries in Kosovo

​​ With the Gründerzeit architecture of its buildings and the dense foliage of trees hiding them from view, Gospodar Jevremova Street is strongly reminiscent of Vienna and Trieste. Part of the street – the section where the mosque stands – is cordoned off today.

The celebration begins with prayers at about one o'clock in the afternoon. The small mosque, which measures only 100 square metres, is hopelessly overcrowded. People hurriedly wash their feet in the courtyard; shoes, taken off in haste by latecomers, block the doorway. The nasal singing of the imam wafts out onto the street, which is lined with tables on both sides of the pavement. Sheets of plastic protect the eastern delicacies on the tables; people huddle together under the plane trees; it is drizzling.

Leila Alomerovics is the driving force behind the "Eid Table". This is the second year the Serbian Muslim woman has organised this interreligious encounter; several others have already been held this year in other Serbian cities. She is visibly delighted: "Yesterday we were in Kragujevac, right in the middle of Serbia. The Muslims I met told me that they are invisible there and thanked me for making them visible. At first, the Christians and the Muslims stood apart from each other. But once the buffet was opened, it was impossible to tell who belonged to what religion."

Leila is chairwoman of Gajret, a Muslim cultural organisation that has existed (albeit with interruptions) in Belgrade since 1923. "Thank God we are living in peace again. What I am doing here is nothing more than what I learned at home in my family. There were eight children in the family and we learned to share what we had."

​​ Standing beside Leila is Aleksandar Necak, head of the Jewish community of Belgrade. "Shana tova," says Leila, the traditional Hebrew greeting on Rosh hashanah, the Jewish New Year, which took place on just the previous day. "Thank you, neighbour," says Necak, adding, "relations between us couldn't be better. We are not only neighbours, we are friends. And what could be better than dining with friends?" he asks with a grin.

When the plastic sheets are removed, the air is filled with the aroma of cinnamon, vanilla, coriander, garlic and thyme. At last the buffet is open. People crowd around and jostle for position, munch happily and lick their lips; the entire street has given itself over to the sensual joys of eating.

By about three o'clock, it is all over. The dishes are cleared away, the tables are folded up, the heart-shaped balloons are taken down. Dragana Pesikanovic is a Catholic and a friend of Leila; while helping to tidy up she says, "We are living in a multireligious and multiethnic country. We should show each other mutual respect and honour. After all we have the same God; it doesn't matter what he is called."

Islam in Bosnia
Ground-Breaking Concepts of Secularization
Islam has been practiced in Bosnia for centuries. Claudia Mende asked Armina Omerika, an expert in Islamic studies, whether the Bosnian Islamic tradition could serve as a model for the integration of Muslims in other European societies

Kosovo as "Muslim State in Europe"
False Fears and False Hopes
The declaration of independence in Kosovo has brought a new nation to Europe, with a population that is 90 per cent Muslim. Islam, however, has no influence on the country's politics. Balkans and Kosovo expert Konrad Clewing explains why

Bosnia's Multiethnic Denominations
Interreligious Dialogue for Reconciliation
The peaceful coexistence of Christians, Muslims, and Jews in Bosnia-Herzegovina has not been a simple matter in the aftermath of the war in the 1990s. Today, however, there are several interreligious dialogue initiatives, many sponsored from abroad. Mirjana Dikic reports

Hans Christian Schmid's "Storm"
The Truth Is a Matter of Negotiation
The UN International Criminal Tribunal for the former Yugoslavia in The Hague has been occupied since 1993 with the war crimes committed during the Yugoslav Wars. Hans-Christian Schmid has now made a film showing how the West also places political decisions over individual's lives. André Tucic investigates

END_OF_DOCUMENT_TOKEN_TO_BE_REPLACED
Social media
and networks
Subscribe to our
newsletter