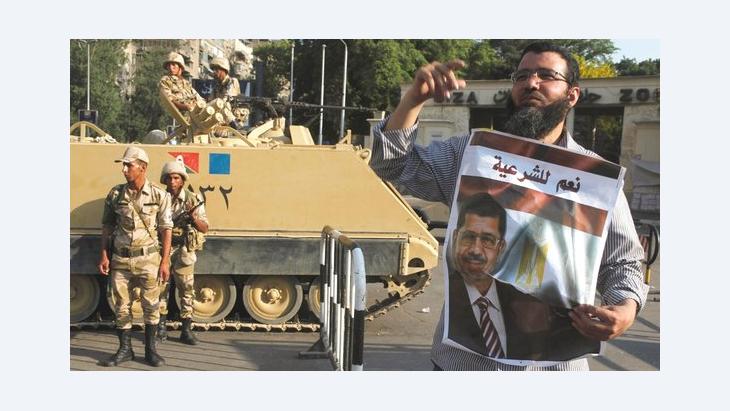 Intervention of the Military
No Second Revolution on the Nile

The forced removal of Mohammed Morsi has intensified the polarization of Egypt. To stop the country becoming ungovernable, all the political forces need to be brought into the transition process, says Loay Mudhoon

There's no question – the military coup centred on Defence Minister Abdel-Fattah al-Sisi was cleverly staged. Flanked by the highest religious authorities in the country – the Grand Sheikh Ahmed el-Tayeb of Al-Azhar University, Coptic Pope Tawadros II, the internationally respected opposition politician and Nobel Peace Prize laureate Mohammed ElBaradei, plus representatives of the Tamarod movement – the army chief announced the end of the failed presidency of Mohammed Morsi and the suspension of the constitution.

But this skilful staging cannot disguise the fact that this putsch against a democratically-elected president has set a dangerous precedent. It's by no means a "second revolution", as representatives of the anti-Morsi opposition movement claim.

The power struggle between the Islamist and "liberal" camps was not decided by the successful mass mobilization of June 30, but by the intervention of the army. We have found out since the events that the army leadership's decision to act against Morsi was taken some days before the mass protests. 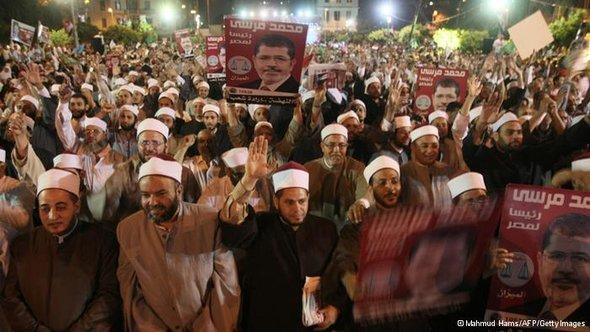 Despite president Morsi's political failure - the Muslim Brotherhood remains the best-organized power in the country, says Loay Mudhoon. "Any attempts to establish a new political order in a post-Morsi Egypt without them can have little chance of success," he argues

​​Even the opportunistic participation of the Salafist al-Nour party ("the Party of Light"), as a representative of the Islamist camp in the militarily organized "disempowerment ceremony", does not change that. For this reason it is important that we give this seizure of power by the Egyptian military its rightful name: it was an illegal putsch and a blow to the democratization process.

There is no doubt that Morsi showed himself incapable of governing what is the largest Arab country in the world. Above all, he failed dismally to unify this politically divided country and become the president of all Egyptians. There was probably no way around that, seeing that he was only elected by a narrow majority in the election a year ago.

On top of this, the apparent inability of his government to work efficiently to end the urgent economic problems affecting the population was also devastating. It did precious little to combat the high unemployment, inflation, and the shortage of fuel.

But was the army's intervention even necessary to cut short Morsi's tenure? When one considers that Morsi's authority was already eroding following the mega-demonstrations, one has to doubt it.

A questionable alliance against Morsi

Now it is clear that the anti-Morsi alliance has missed a historic chance to allow the Muslim Brotherhood – the main representatives of Islamism – to truly fail politically. Instead, the Islamists have been handed a chance to create a new myth of martyrdom for themselves. Following their experiences in Algeria in 1992, when army generals denied the Islamic Salvation Front an electoral victory, the Cairo Islamists of 2013 will be able to claim that whenever they win a democratic victory, they are forcibly removed.

It is also not at all clear whether the heterogeneous and chronically divided anti-Morsi opposition was in a position to challenge the Islamists politically. By refusing to take part in any dialogue with the ex-president, and by announcing that they were going to boycott the parliamentary elections planned in spring, they contributed to the blockade that stalled the country. Their alliance with henchmen from the old, discredited Mubarak regime also throws up some uncomfortable questions.

If the so-called "anti-Morsi alliance" believes that the military was simply carrying out the will of the people and acting in the spirit of democracy, then it is simply naïve: the generals' main aim is to defend their privileges. The army is a well-known hive of corruption and controls at least a quarter of the Egyptian economy. And when it was in power during the first two years following Mubarak's fall, it completely failed in the administration of the state.

The removal of Morsi not only intensifies the polarization of Egypt. It threatens to make a country of some 90 million people completely ungovernable and places it on the edge of collapse. In order to stop that from coming about, all the political forces must be brought into a new transition process – especially the Muslim Brotherhood, which remains the best-organized power in the country. Any attempts to establish a new political order in a post-Morsi Egypt without them can have little chance of success.

For that reason, German and European governments should call for the witch hunt against the Muslim Brothers and their leadership to be stopped immediately – and for the generals to make good on their promises of a new constitution and imminent elections.

Since President Abdul Fattah al-Sisi seized power in Egypt in 2013, he has ruled the country with an iron fist. Civil society, opposition and free press struggle to survive. Tens ... END_OF_DOCUMENT_TOKEN_TO_BE_REPLACED

The lack of grain supplies from Ukraine is forcing Egypt to act. Now even the Toshka project is being revived to grow grain in the desert. Birgit Svensson travelled to see it END_OF_DOCUMENT_TOKEN_TO_BE_REPLACED

In this unusually beautiful book of images and text, published in German and Arabic, artist Marianne Manda presents her own unique take on the megacity of Cairo. In over fifty ... END_OF_DOCUMENT_TOKEN_TO_BE_REPLACED

A stage, lights, a mesmerised audience: it looks like an Egyptian folkloric concert, but Umm Sameh is singing to heal the sick by driving out the demons that possess them END_OF_DOCUMENT_TOKEN_TO_BE_REPLACED
Author:
Loay Mudhoon
Date:
Mail:
Send via mail

END_OF_DOCUMENT_TOKEN_TO_BE_REPLACED
Social media
and networks
Subscribe to our
newsletter