Interview
Publishing Art from Three Corners of the World

With the art magazine "Bidoun", the editors have created a forum where Middle East artists living in the region or abroad can publish their work. Youssef Hijazi spoke with Alia Rayyan, the magazine's editor. 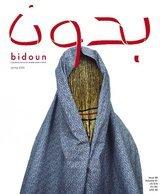 Cover of the first Bidoun edition

​​In Arabic the word "Bidoun" means "without", in Farsi it also means "knowledge". Now, it stands for a new contemporary arts magazine that features Middle Eastern artists and creators. The magazine's three female editors live in New York, Berlin and Dubai. All editorial work is done via internet in their "cyberspace editorial office". When German-Palestinian editor Alia Rayyan wants to call her two colleagues she always has to take the time zone differences into consideration – she has to add two hours to call Dubai and subtract 6 hours to call New York.

What were the first reactions in Berlin to the founding of your magazine?

Alia Rayyan: First of all, the overall appearance of the magazine was well received. The captivating layout and the good print quality were praised by most. We have yet to hear any comments about the texts, but we are anxiously waiting.

How did the idea materialise to give birth to an arts magazine of this kind?

Rayyan: I met up with Lisa Farjam (the editor-in-chief and founder) in Berlin about a year ago. She told me about her idea that she wanted to start up a magazine with the name "Bidoun". Lisa is Iranian and makes her home in New York and Paris. At the time, I was also looking for an opportunity to set up a network as well as locate a medium for it. But I didn't exactly know at the time how I was going to do it. When Lisa approached me with her idea for this kind of magazine, I was toying with thoughts about the network – and then, things just clicked!

Who are you targeting with "Bidoun", who are the readers you are trying to reach?

Rayyan: We are primarily targeting the younger generation that is positioned, so to speak, between two stools. I am talking about the generation that grew up in the Middle East, studied in the West and have returned. Or simply those who have established another lifestyle in the Middle East that doesn't quite coincide with the traditional character of the Middle Eastern lifestyle. The primary purpose of this project is to give these people a mouthpiece and the space to express themselves.

The name of the magazine appears to have been established from the beginning. Why does the name have such a negative meaning?

Rayyan: I'm not of the opinion that name is negative. I regard this expression as a provocation. I know that "Bidoun Djensiah" (in Kuwait, the term for people without a nationality) will connect this and that to it. To us that is nothing negative, rather it is simply referring to reality. It's time to bring up and discuss such topics. We are "Bidouns"! We are neither here nor there! We're everywhere! When I am here I am also in Ramallah at the same time – and when I am in Ramallah I am also to a certain extent here. I am never strictly bound to one location, and that means I don't belong to a particular nation.

Doesn't "Bidoun" sound more like belonging nowhere rather than being everywhere?

Rayyan: Let me formulate it another way without misconceptions and stereotypes and without the exotic. "Bidoun" is referring to the expressions that we use in our normal language usage. Expressions like nation, people, etc. are all well established. But we are breaking out of this rigidity. We negate rigidity and not the "so be it". We don't negate culture, just the desire to restrain it.

The very first sentence of the editorial deals with a social-political topic, namely with the stateless "Bidouns" in Kuwait. Is criticism of society a focal point of the magazine?

Rayyan: No. It is an arts and culture magazine. But especially in this area politics and art are woven tightly together. The magazine is designed to be fun and entertaining, not depressing. It is designed to be entertaining in the sense of offering an exchange. We also have a "Beauty & Fashion" section in the magazine which really has nothing to do with politics. But if we are featuring an Iranian fashion designer naturally something political is bound to play a role. We want to break through certain forms with the magazine. It is an arts and culture magazine, featuring young artists and art projects in the Middle East and abroad. These projects are certain to be political and critical. Nowadays, the arts level is the most interesting aspect in the Middle East because it can be more critical of the situation than some civil groups.

You want to become the mouthpiece for people from the Middle East and North Africa. Then why is "Bidoun" published only in English?

Rayyan: First of all, it appears in English because it is the language that most of the readers in our distribution area understand. You can pick up a copy of "Bidoun" in New York, Los Angeles, Paris, London, Berlin, Beirut, Dubai, Cairo and Istanbul. We had two choices: we either sit down for two years to thoroughly structure everything and then blast off from zero to 100, or we simply start it. We accepted the challenge and jumped in the deep end. Money also played an essential role. We are planning to do versions in Arabic, Farsi and English, similar to "Fikrun wa Fan" (the cultural magazine of Germany's Goethe Institute).

In the magazine you speak of the "Middle East". How can you make a connection to the "being everywhere" when you are expressing yourselves in English?

Rayyan: We have discussed this topic in other countries too. Even in Lebanon we were asked, why "Middle East"? What does it mean today Middle East? We will continue to discuss this topic in future issues. Agreed, it is not an ideal term for us but that separates us from terms like "Forum of the New Islamic Talents" and so on.

So the term was selected consciously?

Rayyan: Consciously yes, but not as a expression that must stay with us forever, not as a pre-determined definition that is prescribed to us. One can not forget that three of us live in New York. That means that even this perspective is present. In no way do we want to define ourselves as a magazine from Islamic countries! And that's truly not the case otherwise many more countries would have to be involved.

END_OF_DOCUMENT_TOKEN_TO_BE_REPLACED
Social media
and networks
Subscribe to our
newsletter