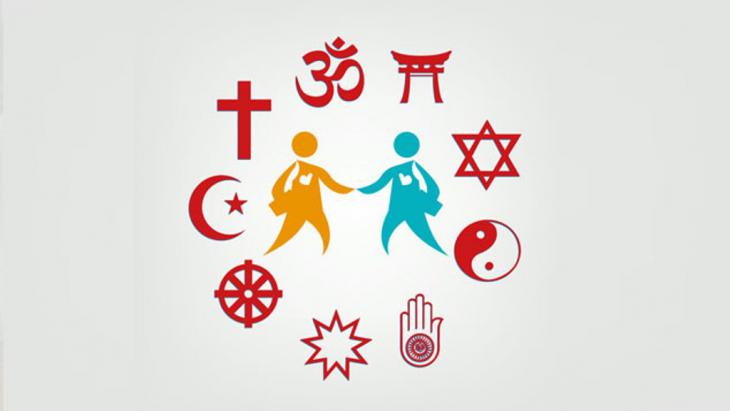 Interview with a mixed-faith couple

Experiences in a Christian-Muslim marriage

Many imagine a Christian-Muslim marriage to be like in the Mahmoudy-book "Not Without My Daughter". But things can be quite different: Alexandra and her Egyptian husband Khaled talk about their relationship.

Alexandra, you and your husband married three times, why?

Alexandra: We exchanged our wedding vows in Egypt. When Khaled arrived in Germany we got married. As far as legality goes, our marriage was officially recognised through the state ceremony but we also had another ceremony in the mosque so he could be married before God. It was very important to him and I had no problem with it. What was important to me was that our marriage be recognised by the Church.

Is there anything about your wedding ceremony that is particularly worth mentioning?

Alexandra: We signed a notarial marriage contract and in that contract are rules as to what would happen to the children should we separate. We also had to agree on a "morning gift" (a gift that the husband gives the wife on the morning of the ceremony). All I asked for was a ring, I am financially secure enough.

Khaled: At the mosque, a lot of women tried to talk Alexandra out of the idea but she stood by the ring.

How does your relationship differ to one of other married German couples? Do you have to adapt to a lot of things?

Alexandra: It was difficult at first to distinguish what was normal for a new couple growing together and what was limited to religious and cultural reasons. It goes without saying that I gave up alcohol on my own free will and it wasn't difficult. When guests come over, Khaled doesn't want us to offer wine or anything. At first I couldn't accept that but since then a few things have become clear to me: It's like I also wouldn't want my friends to smoke a joint. Another thing that was difficult to get used to was that public affection is a no-no. But on the other hand, Egyptians eat from the same bowl and things like that don't bother me. As far as human relations go, Khaled is very respectful towards other people, especially to women and the elderly. I like that a lot.

Khaled: I have learned to love my wife as an individual apart from her nationality and her religion. Coming to Germany was a big risk for me but I trusted her from the start. She respects the fact that I neither eat pork nor drink alcohol. Of course I'm happy that she gave up alcohol.

What role does each other's faith play in your relationship?

Khaled: Since my childhood I have been exposed to Christianity through neighbours and good friends. That's why I can easily accept it. It's good that Alexandra, as I, can accept all religions, especially Islam. And things like Christmas trees and Easter are nice traditions for me.

Alexandra: I never wanted to marry an everyday atheist. A devoted, but at the same time accepting Muslim is much more preferable to me. We can pray at the same time. A friend said to me, "Now you have twice as many religious holidays!" We try to include people in the festivities. There have been times that I have taken part and fasted during Ramadan or at least didn't eat in Khaled's presence. In the evenings we had a great time cooking together.

Will your children be Christian or Muslim?

Alexandra: We don't have any yet. But that is definitely our biggest problem. We both agree we don't want to tear them apart. We decided that we will bring them up in both religions without polarizing them. When they are older they can decide for themselves. And without question, they should never feel like they have to choose between us!

What would you recommend to other Christian-Muslim couples?

Khaled: Before the actual ceremony, they need to get everything out in the open. And most of all, they need to choose their partners well. Be prepared from the beginning on to see the differences as opportunities.

Home
Print
Newsletter
More on this topic
Muslims and Inter-Religious Marriages: Negotiating Religion and Social IdentityWedding Tourism on Cyprus: No Civil Marriages in LebanonChristian-Muslim Dialogue in Germany: Together in the Search for GodThe Intercultural Theatre Project ''Koran School'': Intensive Course in Muslim Life in Germany
Related Topics
Christianity, Christians in the Islamic world, Dialogue of Religions, Islam in Europe, Islam in Germany, Sharia
All Topics

Reading Hassan Blasim's God 99 is an immersive experience of grief and exaltation, anger and disgust, writes Marcia Lynx Qualey. We join the Iraqi narrator as he sits around in ... END_OF_DOCUMENT_TOKEN_TO_BE_REPLACED

Turkey's parliamentary and presidential elections are scheduled for June 2023. But they are already casting a shadow. While the opposition is calling for early elections, ... END_OF_DOCUMENT_TOKEN_TO_BE_REPLACED

Recep Tayyip Erdogan, disappointed by the European Union’s reluctance to integrate Turkey into its ranks, has re-directed his country’s diplomacy toward the Maghreb and Africa to ... END_OF_DOCUMENT_TOKEN_TO_BE_REPLACED

A law is currently being debated in Morocco that would legalise the cultivation and export of medicinal cannabis. For many small farmers, this would bring considerable advantages ... END_OF_DOCUMENT_TOKEN_TO_BE_REPLACED

Philosopher Juergen Habermas was due to be awarded a major Arab prize in Abu Dhabi, but has turned it down following criticism. This decision torpedoes Arab efforts at a ... END_OF_DOCUMENT_TOKEN_TO_BE_REPLACED
Date:
Mail:
Send via mail

END_OF_DOCUMENT_TOKEN_TO_BE_REPLACED
Social media
and networks
Subscribe to our
newsletter