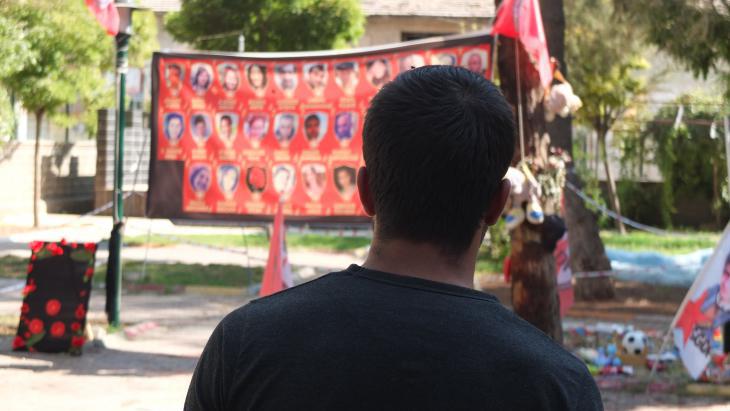 The faces of the 31 members of the Federation of Socialist Youth Associations (SGDF) killed in the attack on 20 July still gaze down from banners strung around the courtyard of the Amara Culture Centre where the bomb was detonated. Inside, surrounded by broken windows, sits Adnan, a 25-year-old Kurd, who describes the IS terrorism that drove him out of Kobani, only to catch up with him across the border in Suruc. Fabian Kohler spoke to him about the attack

Adnan, you work at the culture centre in Suruc. It's been about a month since the bloody terrorist attack. How are you all managing?

Adnan: We are currently receiving a great deal of support, especially from people in other Turkish cities who are keen to help. Many international journalists have also visited with their camera teams. Although we can't forget the day of the attack, we are determined to carry on.

Where were you when it happened?

Adnan: The bomb went off around noon. Five minutes earlier, I had gone home to pick up some drinks. It was just five minutes. Then I heard an explosion and the ground shook. I thought a transformer had exploded somewhere and I hurried back to the culture centre.

Nothing in the mobile phone videos taken that day come close to my memories of the attack. People were screaming, panicking, running in all directions. There were body parts everywhere. I shouted to everyone to run away. I'm from Kobani – I know that the really big bombs often only explode later. The terrorists wait until a crowd has gathered and then detonate an even bigger bomb. Luckily, that didn't happen, so then we carried the wounded to cars and covered up the dead.

Was the culture centre expecting an attack?

Adnan: Yes and no. On 18 July, we had organised a major celebration to mark the liberation of Kobani. Many political party representatives were present, so we thought that if IS were to attack, it would be on that day. Honestly, however, it′s not really something you can imagine. People come to us wanting to discuss politics, to help, to meet others, or just to read and relax. For the past three months, we had been working to recruit people interested in rebuilding Kobani. Activists were planning to bring these toys [points to the toys scattered around the site of the attack] to the children of Kobani. They only wanted to help. 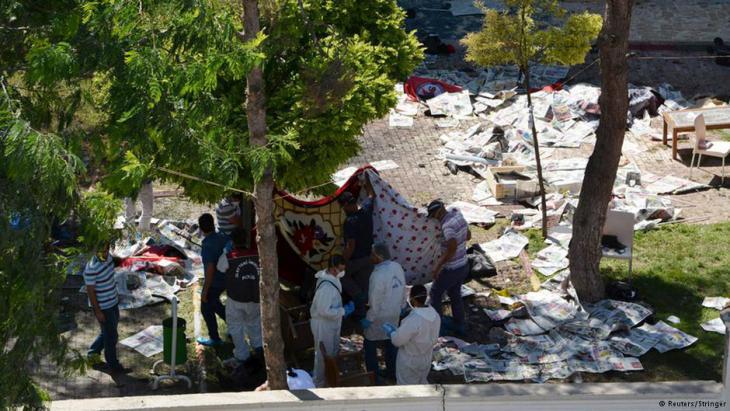 Signs of destruction: on 20 July 2015, a bomb exploded in the garden of a culture centre in the Turkish city of Suruc, where supporters of a socialist youth organisation had gathered for a press conference. Around 300 young people were present. According to the organisation, they had planned to travel to the neighbouring city of Kobani to bring aid

Have you an answer to the question as to why this happened?

Adnan: Why they kill us? Because we are Kurds. We, however, are not terrorists. We do not kill civilians. We are fighting for our freedom, something the terrorists and the Turkish government seek to deny us.

Who do you suspect was behind the attack in Suruc?

Adnan: The terrorist was definitely a member of IS. The main question, however, is who is helping Islamic State? There are only two ways for the terrorist militia to enter Turkey – across either the Syrian or the Iraqi border. We control the Rojava region in northern Syria. Neither the YPG, the peshmerga, nor the Iraqi government are about to let them through. The people behind the attack are those who have always provided IS with weapons and funding.

The Turkish government recently declared that it would start targeting IS positions. How do you view this announcement?

Adnan: They claim to be attacking IS, but, in fact, we are the ones being targeted. More than 1,000 Kurdish activists have been arrested in Turkey in recent days. They simply do not want a Kurdish state to emerge in Rojava that might limit their power. And Islamic State is playing into their hands. Why did IS attack Kobani? There is nothing extraordinary about the city. It has no oil, no major industry. Much has to do with the fact that Turkey cannot tolerate the idea of a Kurdish government on its border.

Were you in Kobani when IS attacked the city?

Adnan: Yes. They arrived proclaiming, "We′re going to kill your men and children and sell your women in Raqqa." People fled from village to village shouting, "IS! IS! Run for your lives!" A friend of mine was beheaded; they hung her body from a tree. I heard of another friend whose hands were cut off before they killed him. We never found his body. 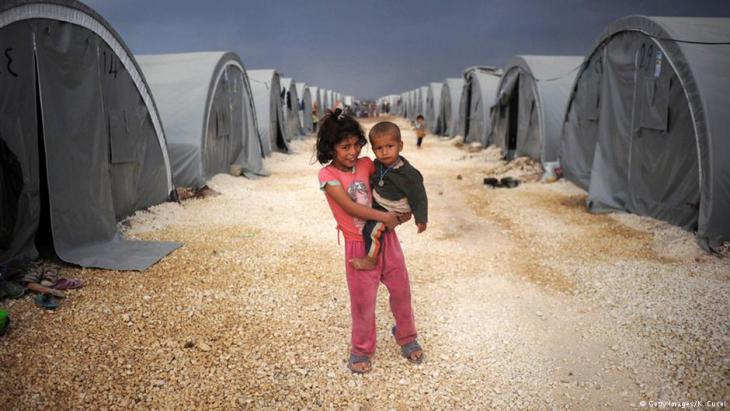 The plight of refugees in Suruc: one of the largest refugee camps housing Syrians forced to flee their country because of the fighting is situated in Suruc, Turkey. The camp, which opened last January, is home to around 35,000 refugees. Since the civil war began four years ago, some 1.8 million Syrians have fled to Turkey. The border between the two countries extends over 911 kilometres

How is your family doing?

Adnan: My family – my parents, my brother, and my two sisters – all used to live in Kobani. My brother died fighting IS. There was not much left of his body after the attack on his YPG unit. I buried him before we left Kobani. That was six months ago. My family now lives in Turkey. Only one of my sisters is still in Kobani. We are currently involved in rebuilding the city; eventually we want to go back.

Do you believe that it is possible to return to the conditions of the post-Assad period and Kurdish autonomy in Rojava?

Adnan: I hope so. People were afraid of Assad. But we′re not after the so-called "revolution" either. We were promised freedom and all we got was destruction – it was basically all about money. We′re aiming for a third way. After the Assad regime withdrew from our region, we took over the police station and set up a people's government. We also held the first free elections. Of course, it was a weak government, inexperienced and prone to mistakes. But, gradually, things began to improve. We had vegetables, bread, everything we needed. We drew our water from the well and a generator supplied electricity. It was great.

I will continue to work for that cause. My grandfather is too old to fight for our future. And my parents aren′t up to it anymore either. Only the young can make a difference – working together with a government that doesn't care if you′re a Turk, an Arab, or a Kurd; a government that lets you speak your mind. All we want is freedom.

Home
Print
Newsletter
More on this topic
After the attack in Suruc: Turkey fighting on two frontsErdogan and the Kurdish conflict: A battle for votesThe Kurdish conflict: Barzani in a tight spot
Related Topics
'Islamic State' | IS, Assad regime, Jihadism | Jihadists, Kurdish-Turkish Conflict, Kurds
All Topics

Twenty years after 9/11, the world is faced with the dual challenge of Islamophobia and anti-Westernism. Ahmet Kuru argues that Muslims in the West, well versed in both Western ... END_OF_DOCUMENT_TOKEN_TO_BE_REPLACED

Two decades after the attacks of 11 September 2001, the West faces the shattered debris of its failure – not only in Afghanistan, but also in Iraq, Syria, Libya and Yemen. What ... END_OF_DOCUMENT_TOKEN_TO_BE_REPLACED

Twenty years after 9/11, the United States is recalibrating its war policy. However, its assertions that the era of endless wars is over are a myth, writes Maha Hilal END_OF_DOCUMENT_TOKEN_TO_BE_REPLACED

The coronavirus pandemic has turned lives upside down all over the world. In the Middle Ages, however, people lived with epidemics all the time. The best and most famous ... END_OF_DOCUMENT_TOKEN_TO_BE_REPLACED

While agreeing last week to a withdrawal of US combat troops from Iraq, neither Iraqi nor US leaders can admit publicly how much they need each other. By Cathrin Schaer END_OF_DOCUMENT_TOKEN_TO_BE_REPLACED

Reading Hassan Blasim's God 99 is an immersive experience of grief and exaltation, anger and disgust, writes Marcia Lynx Qualey. We join the Iraqi narrator as he sits around in ... END_OF_DOCUMENT_TOKEN_TO_BE_REPLACED
Author:
Fabian Köhler
Date:
Mail:
Send via mail

END_OF_DOCUMENT_TOKEN_TO_BE_REPLACED
Social media
and networks
Subscribe to our
newsletter