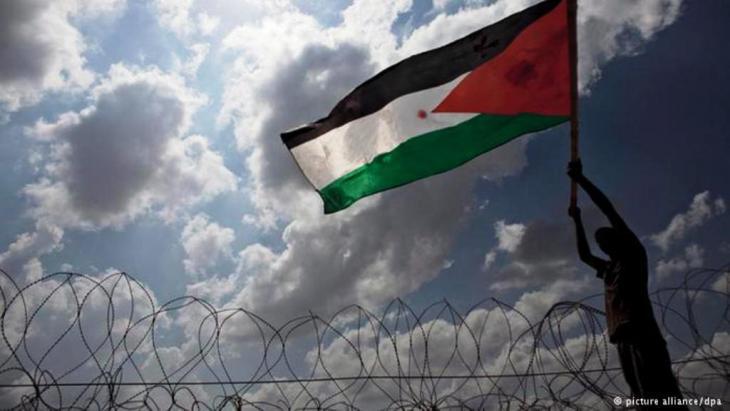 The phrase "Palestinian resistance" evokes images of suicide bomb attacks and stone-throwing youths. But the peaceful resistance movement in Palestine has long been a reality. The village of Bil'in has always played a leading role in these endeavours. Laura Overmeyer spoke to Abdallah Abu Rahma, co-founder and co-ordinator of the Bil'in Popular Committee against the Wall

Abdallah Abu Rahma, for years now, you have been involved in the peaceful resistance movement and are a high-profile activist in Palestine. How did this come to pass?

Abdallah Abu Rahma: During the first intifada in the 1980s and my studies in the 1990s, I took part in the peaceful resistance. But I wasn't properly active until 2002, when Israel announced intentions to build a barrier between it and the West Bank "for security reasons".

When it became known in 2004 that this "apartheid wall" would deviate from the original Green Line and cut my village off from more than half of its land, my friends and I decided it was time to act. Many people in Bil'in live from agriculture. The loss of their land means the loss of their livelihood.

So you founded the "Bil'in Popular Committee against the Wall".

Abu Rahma: Correct. We met with Israeli and international activists and began to plan our peaceful actions. When the bulldozers arrived on the morning of 20 February 2005, to begin flattening our fields to build the barrier, we were ready for our first demonstration. It ended – like all demonstrations in the following days, weeks and years – with an act of violence from Israeli soldiers.

But we didn't allow ourselves to be discouraged and we carried on – initially every day, then after a few months, every week, so that it wouldn't become routine. That's what we've been doing ever since: every Friday after prayers, we hold a demonstration at the barrier. 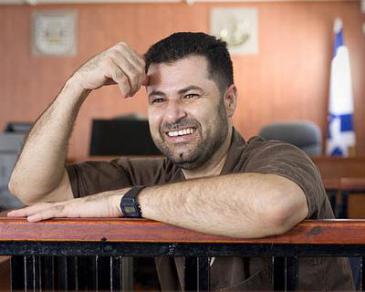 Courage and non-violent resistance: Abdallah Abu Rahma, co-ordinator of the Bil'in Popular Committee against the Wall, was sentenced to 15 months in prison in 2009, but was released following pressure from the international community

So it's the same procedure every Friday?

Abu Rahma: No, we were very creative, especially in the early days. We were always dreaming up new activities to attract media attention and motivate more people – from Palestine, Israel or abroad – to get involved and show solidarity. We chained ourselves to the precious old olive trees and prevented Israeli destruction in every conceivable way.

Later, when the first provisional fence was erected on our land, we decided to emulate Israel and establish a "settlement" on the other side of the fence. We put up a container, which Israeli soldiers repeatedly removed and we repeatedly replaced. We went to court, explaining that this container was just as illegal as the 500 "outposts" [settlements that have not yet been authorised by Israel – ed.] in the West Bank. As these were not being cleared, they also had no right to remove our container.

We were given temporary permission to use our container and, therefore, also our land on the other side of the fence. The container became our meeting point and we organised many events there, for example a public viewing during the 2006 Soccer World Cup. It was this kind of thing that put us in the international spotlight and eventually led to the success of our committee.

What success do you mean?

Abu Rahma: Right at the start of our activities, we found an Israeli lawyer who would represent our case in an Israeli court. On 4 September 2007, we got the great news that the supreme court had ruled in our favour: the barrier was illegally separating our village from our land, and the "security reasons" cited to justify its construction were not tenable. The court ruled that the barrier in its current form had to be taken down.

This was a fantastic success – not just for Bil'in, but also for the principle of peaceful resistance. If we hadn't ensured that our case remained permanently in the public eye, we probably would have gone under. 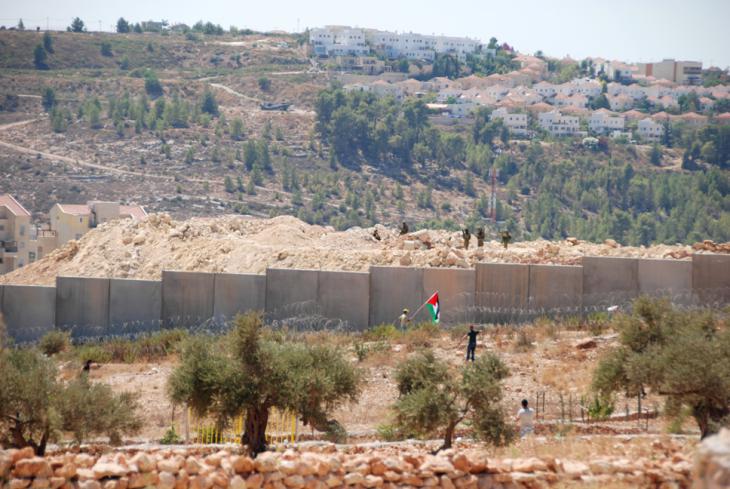 Despite this success, the Friday protests continue to this day. What are your key demands?

Abu Rahma: The ruling was made in our favour, but the Israelis made no moves to take down the fence. This actually didn't happen until June 2011, and the new course of the barrier – which this time took the form of a concrete wall – still confiscates 25 per cent of our land.

Abu Rahma: That's right, gradually other villages struggling in similar situations started following our example: Nil'in, Nabi Saleh, Kufr Qaddoum, Al-Maasara. We support them as best we can, after all, we're all in the same boat.

For a while now we've also been organising an annual conference on forms of peaceful resistance and take part in other actions in the West Bank, like the protest camps that have been held since January 2013. Bab al Shams was the first one of these: we set up a tent camp in what's known as the E1 zone in East Jerusalem to protest against Israel's plans to build this last corridor between Jerusalem and the West Bank. The camp was violently broken up and destroyed after two days; many activists were arrested. But it attracted a lot of international attention. We repeated it several times, most recently in January 2014 in the ruins of the historical Canaanite village of Ein Hijleh in the Jordan Valley.

Abu Rahma: …but these are sacrifices you have to make. Over the past nine years, more than 1,500 demonstrators have been injured in Bil'in, two good friends lost their lives. More than 200 people were arrested – some of them several times.

I myself was arrested in 2009 and sentenced to 15 months in prison for "incitement" and the "organisation of and participation in illegal protests". More than 50 other peaceful activists from Bil'in were detained at this time.

I was lucky; I was freed early thanks to a concerted global campaign by human rights organisations and foreign governments. Catherine Ashton lobbied personally for my freedom and expressed her concern at Israel's treatment of a "representative of the peaceful resistance". I'm the first Palestinian to be recognised by the European Union as a "defender of human rights"…

Interview conducted by Laura Overmeyer.
© Qantara.de 2014
Translated from the German by Nina Coon

Home
Print
Newsletter
More on this topic
Non-violent resistance in Palestine: Hitting a nerveIsraeli-Palestinian relations: Dialogue in a time of conflictIsraeli–Palestinian dialogue in Germany: It is possible to work togetherIsrael's crisis politics: On hope and despair in the Middle East
Related Topics
Israeli settlement, Israeli-Palestinian conflict, Palestinian Authority, Social movements
All Topics

Her grandparents are Jews – born in Tunisia and Algeria. Director Cleo Cohen has now broken the silence about this with a very personal debut. By Nadine Wojcik END_OF_DOCUMENT_TOKEN_TO_BE_REPLACED

Every year in December, the team at Qantara.de takes a look back at the articles that proved most popular with our readers. This year is no different. Here is a run-down of the ... END_OF_DOCUMENT_TOKEN_TO_BE_REPLACED

Christmas in Bethlehem is usually a festive and colourful season. This year, festivities in the Palestinian town are set to return – but the COVID-19 pandemic is still casting a ... END_OF_DOCUMENT_TOKEN_TO_BE_REPLACED

Haifa is known for being Israel’s exemplary model of relative harmony between Jewish and Palestinian citizens. Its unique "Holiday of Holidays" is a joyous, multicultural event ... END_OF_DOCUMENT_TOKEN_TO_BE_REPLACED

May 2021 saw a deadly flare-up in Israel-Hamas hostilities, with eruptions of extreme violence in several of Israel's 'mixed' cities. Two weeks later, a broad-spectrum governing ... END_OF_DOCUMENT_TOKEN_TO_BE_REPLACED

Ankara is seeking to improve its relations with several states in the Middle East – such as the United Arab Emirates, Egypt and Israel. There are several reasons for this. ... END_OF_DOCUMENT_TOKEN_TO_BE_REPLACED
Author:
Laura Overmeyer
Date:
Mail:
Send via mail

END_OF_DOCUMENT_TOKEN_TO_BE_REPLACED
Social media
and networks
Subscribe to our
newsletter