Many African nations view Europe's immigration policies as one-sided and selective. Abdou Salam Fall, a sociologist at Senegal's "Institut Fondamental d'Afrique Noire" (IFAN), advocates a policy of sustainable development as a solution for all sides. Naima El Moussaoui spoke with him in Dakar 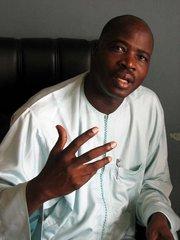 ​​Mr. Fall, you are a sociologist at IFAN and an expert on migration. Irregular immigration affects most of the countries of West Africa today, in particular Senegal. Why?

Salam Fall: We can't claim that such migration is increasing. The strongest wave is at any rate already past. That was in the period of 2005/2006. Since 2007 we have been observing how the streams of migrants are slowing. The reasons for this are gradual saturation and the high risk borne by irregular immigrants. In this connection, we must not forget the growing disenchantment and disappointment felt by many of these migrants.

The European continent has a long tradition of immigration. What is your opinion of the European Union's current migration policies in view of the countries' resistance against the streams of refugees from Africa?

Salam Fall: European migration policies are still in the formative stage and can be described as extremely restrictive, even draconian. But no matter what can be said about EU migration policy in general, we still have to distinguish between the various European countries.

So you don't think much of EU-wide cooperation and prevention in refugee and immigration policy?

Salam Fall: No, because the EU's migration policy is based on control mechanisms. It's true that there are openings here or there in terms of demand for certain kinds of workers, for example within the scope of the cooperation agreement between Spain and Senegal. Nevertheless, with these agreements the Spanish companies organise only a seasonal migration according to fixed and precise specifications.

Is the selective elite immigration favoured by France's President Sarkozy leading to a "brain drain" in African countries like Senegal? 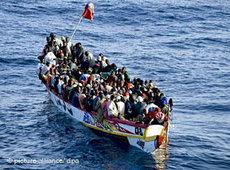 Until development policy is better organised, immmigrants will still risk their lives on fragile boats

​​Salam Fall: This kind of policy can never be a means for resolving the problem. Young immigrants should in general be given free choice in their actions. With migration approaches like the French policy of migration choisie ("selective immigration"), European politicians want to encourage qualified young people to leave Africa without having to first invest in their education – it's a case of: "I take only what I want." We are not keen to see this important potential being lured away from Africa.

On the other hand, the governments of Africa are accused of sharing in the blame for the situation, since they do not observe the principles of good governance and do not create any economic incentives to encourage elites who want to emigrate to change their minds and stay.

Salam Fall: The problem is that the developing countries have fallen into a dependency trap – this includes some forms of development aid, the mechanisms of international relations, the financial obligations to the WTO, IWF and the World Bank. The regulations being applied at the moment are not conducive to development in these countries. The defined arrangements and agreements imposed on them do not encourage development in these states; they are inadequate.

Migration policy should aim primarily at development policy for fighting poverty, with the goal of further advancing the principles of humanity. Regulations on an international scale should first of all take into consideration all of these factors. How can structural imbalances be abolished, disparities between the various countries evened out, and conditions for productivity and prosperity be created in the countries that are threatened from the start by emigration? There can be no immigration policy without meaningful development policy.

Aren't the African countries at least partly responsible for the situation on the continent?

Salam Fall: This is indeed the case, because the type of government in our countries does not exactly make life here easy. We need only look at the inequalities, the concentration of power, the routine corruption, the weaknesses in social policy, the general deterioration of living conditions, the lack of creativity in promoting jobs for young people – all of this contributes to young people's despair of ever being able to build a future in their native country and of making a life for themselves there.

Qantara.de
Exodus from Africa
The Search for a Better Life
Those who risk their lives to trek thousands of kilometres through the Sahara desert to get to the North African coast and make their way to Europe must have sound reasons for doing so. In his commentary, Dominic Johnson names them

The EU's Common Asylum Policy
Rights on the Edge
One gets the impression that the aim of the EU's common asylum policy is not to protect refugees, but to protect Europe from refugees, says Karl Kopp in his commentary

Africa
Globalisation Is an External Phenomenon
Globalisation is having a profound effect on the entire world. For Africa, however, the traffic has all been one way: globalisation and the advent of information and communication technology have flooded the continent with western ideals and standards. By Ayodele Aderinwale

END_OF_DOCUMENT_TOKEN_TO_BE_REPLACED
Social media
and networks
Subscribe to our
newsletter