Escape from Suffering and Oppression

Acts of self-immolation have set off waves of protest across Tunisia and Egypt. Amira Muhammad spoke to Ahmed Okasha, president of the "Arab Federation of Psychiatrists" about how Arab psychologists are interpreting this protest phenomenon 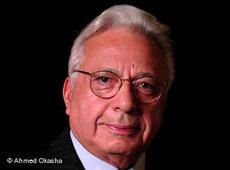 Ahmad Okasha: "Suicide is generally a cry for help, an act of protest against a particular situation"

​​Mr Okasha, the current wave of suicides in Arab countries is clearly an expression of despair, oppression and helplessness. But how should we interpret this development? Does it also have to do with the illusion of martyrdom and glory?

Ahmad Okasha: I don't believe that it has anything to do with martyrdom fantasies. Suicide is generally a cry for help, an act of protest against a particular situation and a plea against powerlessness, desperation and frustration.

We also have to bear in mind that around one million people worldwide take their own lives every year. If we add failed suicide attempts, the number is ten times higher.

Why is it that self-immolation has spread so quickly through so many Arab countries since the Bouazizi suicide?

Okasha: Bouazizi's self-immolation in protest against unemployment and rampant injustice threw the entire Arab world into turmoil. Many people with no outlet for their own frustration, despair and helplessness, understand how he must have felt and see him as a kind of role model.

It is noticeable that the suicides in Egypt and elsewhere have usually taken place in front of public buildings – like the Council of Ministers or the People's Parliament – as if to say: "We are wretched and unhappy! If you cannot help us, then we will turn to God!" It is a kind of escape, from suffering, helplessness and oppression.

Why is it, would you say, that young men like Bouazizi have chosen to commit suicide by burning themselves to death?

Okasha: There are characteristic methods of suicide that have developed for different countries. In places where the possession of firearms is legal, such as in the United States, for example, the gun is often the method of choice.

In countries where such weapons are not available, a different method will be chosen. In the rural areas of Egypt, for instance, women might douse themselves in petrol and set it alight. They don't take an overdose of tablets, because that option is not open to them. In the cities, men and women will often throw themselves from one of the Nile bridges, or they might set themselves on fire.

So the method of suicide chosen depends on ethnic and cultural factors?

​​Okasha: Yes, the type of suicide chosen seems to depend on cultural and religious inclinations and to vary from country to country. Self-immolation and jumping into the Nile are methods typical for Egypt, indeed, for the Arab world in general.

Do you think that those who came after Bouazizi might secretly have believed that by following his example they could bring about popular uprisings in their own countries too? Or are such actions primarily born of people's desperation?

Okasha: At the time of their suicides these people were in a state of despair, just as Bouazizi was, due to economic, social or psychological circumstances. Bouazizi burned himself to death because he could see no other way out.

He had tried selling vegetables, but was not allowed to. He complained, but was then subjected to humiliation. He had nothing to eat or drink. He could not start a family. In the end, there was only one way of escaping from the situation. He also wanted to protest against the government and the authorities that had brought him to such a situation.

Can you elaborate a little more on the psychology of people who commit, or who are at risk of committing, suicide?

Okasha: Every case must be considered individually. Seventy per cent of suicides worldwide are the result of depressive disorders. Such people see their lives in very pessimistic terms. The present has nothing positive to offer them; they see their past as cheerless and drab and the future as black. Suicide offers them an end to their suffering.

The pain caused by depression is stronger than the pain of cancer. Someone who has cancer but is not depressive, wants to go on living. If he becomes depressive, however, he loses the will to live and may try to kill himself. Depression is present in 40 to 50 per cent of painful chronic diseases.

Depression can be down to economic factors such as unemployment or poverty; but it can also have social causes, such as the injustice, oppression or degradation experienced by the person in question. People may also commit suicide for psychological reasons, if they lose a loved one, for example.

Then there are the schizophrenics, people who commit suicide because they hear voices that tell them to do so. They feel that they are being watched and that everyone is against them. They become paranoid or jealous, because they imagine, for instance, that their spouse is being unfaithful to them.

How is suicide viewed in Muslim societies?

Since the successful Jasmine Revolution in Tunisia, Mohammed Bouazizi, who triggered the uprising there by setting himself alight, has become a role model for many Arab youths

​​Okasha: Some see it as an escape or as cowardice; for others it is an expression of courage or dignity. There are many interpretations. As psychologists, we view every suicide attempt as a cry for help that we have to take seriously. It would be completely wrong to see suicidal people simply as attention-seekers. And I think, this time, the cry for help has finally registered with the politicians in the Arab countries.

There has already been some reaction in Kuwait and in Saudi Arabia, and I hope that the governments in the other Arab countries will also give some thought to the quality of life of their citizens before feelings of desperation and impotence get the upper hand.

The fall of the Iron Curtain in Eastern Europe was also preceded by a wave of suicides. Are there parallels here to the situation in the Arab countries?

Okasha: It is the same in both cases. If suppression and frustration are too pervasive, freedom of expression denied and democracy constantly suppressed, if a country is governed in a permanent state of emergency, its people subjected to arrest and torture, deprived of their dignity and humanity or humiliated by poverty, unemployment and oppression, then a dramatic increase in suicide rates will follow.

Protests in Egypt
The Twilight of the Despots
In his essay, Stefan Weidner points out that Mubarak is not the only one who seems to have lost touch with the reality of the situation in Egypt, so too have Western governments and media

Protests in Egypt
Egypt's "Day of Anger "
With Mohamed ElBaradei's return to Egypt, demonstrations planned for after Friday prayers and the authorities' restriction of access to the Internet, the situation in Egypt is set to escalate over the weekend. Al-Masry Al-Youm assesses the significance of the protests on 25 January

END_OF_DOCUMENT_TOKEN_TO_BE_REPLACED
Social media
and networks
Subscribe to our
newsletter