In a Taliban Stranglehold

Born in 1948 in the Pakistan town of Rawalpindi, Ahmed Rashid is among the most sought-after experts on the Taliban, Afghanistan and his crisis-ravaged homeland. Ramon Schack asked him about the current problems in the region 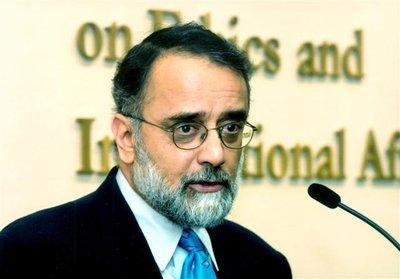 Karzai's political survival does not depend on talks with the Taliban, but rather on the kind of politics that serves the people, builds infrastructure and improves economic prospects, says Ahmed Rashid

​​ Mr. Rashid, if President Hamid Karzai were to ask for your advice on the present situation in Afghanistan, what would you tell him?

Ahmed Rashid: The greatest weakness of Karzai and his administration is surely a glaring lack of ability to govern, as manifested for example in the influence exercised by the warlords or in rampant corruption. His desire to accelerate the negotiations with the Taliban and to get a green light for his efforts from the Americans are at any rate based on shaky ground. Karzai hasn't yet taken to heart the fact that, as an Afghan, one can only negotiate with the enemy if coming from a strong position. The current weakness of the Afghan government would place constraints on such talks from the very start, destroying everything that has been achieved in Afghanistan thus far.

Karzai assumes that launching a dialogue with the Taliban and ending the civil war could secure his political survival. But his survival doesn't depend on such negotiations, but rather on practicing the kind of politics that serves the people, builds infrastructure and improves economic prospects, in order to then address the Taliban from a position of strength, having demonstrated his ability to govern well.

Did you ever tell President Karzai that directly?

Rashid: I did, two years ago in Kabul.

You were just speaking of Karzai's political survival. Are you sometimes afraid he might suffer a horrendous fate like that of Mohammed Najibullah, Afghanistan's Communist president, whose mutilated body the Taliban dragged through the streets in 1996?

Rashid: I hope not. I think that Afghanistan has put that phase behind it. There is of course no guarantee that Karzai will survive. If it comes to negotiations following the withdrawal of Western troops, Karzai is likely to be viewed as a transitional head of state. An agreement could possibly be reached with the Taliban that Mullah Omar would not return to Afghanistan, along with some other Taliban leaders who are unacceptable to the international community and who could for example go into exile in Saudi Arabia. The Loya Jirga could then elect a new president – one whose life would not have to be protected by the Americans.

"Although the Afghan Taliban has in part retreated to Pakistani soil and are under the protection of the Pakistani Taliban, they still have major differences", explains Ahmed Rashid

​​ You once said that the Obama administration's biggest mistake with regard to Afghanistan was to set down a schedule for the withdrawal of American troops. Do you still hold that view?

Rashid: Yes, that was one of the biggest mistakes of all. Even though the schedule is constantly being changed and reinterpreted, the Afghans, the Taliban and the neighbouring countries all assume now that the Americans will be leaving. As a result, all of these forces are trying to safeguard their own future, which only aggravates the situation and makes the starting position after the withdrawal even more complex.

The Western media often portray the Taliban as a uniform, monolithic block. Could you perhaps sketch for us the differences between the Afghan and the Pakistani Taliban?

A political agenda connected with their Pashtun ethnicity?

Rashid: No, the Pakistani Taliban have the goal of setting up an Islamist system in Pakistan. They have bases in the Punjab, in Sindh and in other regions of Pakistan. The Pakistani Taliban have long since been made up not only of Pashtuns, but have instead become a national movement in which all ethnic groups can be found – in contrast with Afghanistan, where over 90 per cent of the Taliban are of Pashtun origin.

Catastrophic flooding recently caused immense damage in your Pakistan homeland, claiming many lives and destroying large parts of the infrastructure. Do you view the catastrophe as a challenge to Pakistan's political stability as well?

"The Taliban did not offer a ceasefire during the flooding, but instead seized the opportunity to expand their positions and increase their influence", says Ahmed Rashid

​​ Rashid: Unfortunately yes, on two different levels. On the one hand, because the flooding destroyed large sections of the infrastructure, particularly in the Northwest. It will take years to repair the damage. Many people have been ruined by the flood and robbed of their means of subsistence. Those affected were already living in one of the most impoverished regions of Pakistan, along the Indus River. Millions of people, hungry and homeless, have to be cared for in the coming months and years, and the Pakistani government is simply not equipped to do so.

Secondly, the Taliban did not use the flooding as an occasion to offer a ceasefire; on the contrary, they took advantage of the situation to expand their own positions and increase their influence. At the moment, the Taliban are going about recouping the terrain losses they suffered last year. As many bridges in these areas were destroyed and the army is therefore blocked, the government has no way to stop them.

Why isn't the West offering more help? Is it because of Pakistan's negative image in the West, as a failed, and dangerous, state?

Rashid: Pakistan has a credibility problem in the international community.

Who is to blame for that? 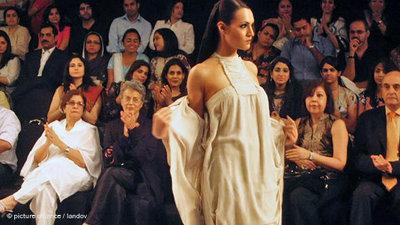 Karachi Fashion Week: "Naturally there is still a strong urban middle class, but they are suffering more and more from Pakistan's decline and militant pressure", says Rashid

​​ Rashid: Primarily the Pakistani government. Corruption is a widespread phenomenon in Pakistan, reaching up to the highest levels of government. A large portion of the relief funds donated after the devastating 2005 earthquake in Kashmir did not reach the needy but were instead drawn off into obscure channels. And there is still no transparent institution to oversee the distribution of donated monies.

The Pakistani government should have taken steps long ago to remedy this deplorable state of affairs, and yet it has shown itself incapable of offering its citizens any reasonable vision for the future. What's more, the catastrophe came at a time when the western part of Pakistan had already become fed up with matters.

Might the reluctance to donate relief funds also be due to growing hostility toward Islam in the West?

Rashid: Possibly. However, the aftermath of the world economic crisis is probably also a major factor.

Your hometown of Lahore was recently the target of terrorist attacks. Do you have the feeling that your lifestyle as wanderer between worlds, as representative of Pakistani cosmopolitanism, is now jeopardised?

Rashid: In recent years there has been a strong increase in the "Talibanisation" of Pakistani society. Even in the big cities, like my hometown of Lahore. Young madrassa (i.e. Islamic school) graduates make the law in the streets, attacking representatives of other lifestyles and forcing young women to veil themselves. Naturally there is still a strong urban middle class, but it is suffering more and more from Pakistan's decline and pressure from the militants. I doubt that the militants are currently in a position to force their stone-age ideas on the urban centres, but the lack of resistance is certainly alarming.

Would you agree with the thesis that, without the strong influence of Saudi Arabia in the past few decades, both Afghanistan and Pakistan would not be in the difficult situation they are today? 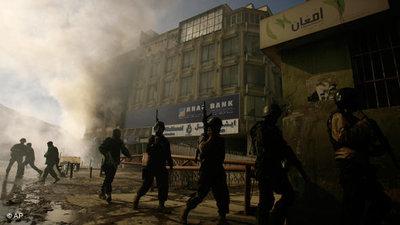 "The spread of Wahhabism, the puritanical Saudi form of Islam, in the recent past sowed the seeds for today's problems", says Rashid. Pictured: Afghan security forces after a bomb attack in Kabul

​​ Rashid: I am of the opinion that Saudi foreign policy in the 1980s and 90s exerted an incredibly negative influence on the stability of the entire region. The prosperity of the Saudis or, more precisely, the way in which they used their wealth to spread a radical Islamic mindset, the Wahhabi teachings, is behind many of today's conflicts. Back then, they missed their chance. If the Saudis had used the opportunity to invest their money in the educational systems of the affected countries, then today we would be seeing a completely different and much less problem-ridden Islamic world.

In fact, though, the educational system in Saudi Arabia itself is absolutely antiquated – how would they then have ever been able to finance sensible educational policies in their foreign sphere of influence? The spread of Wahhabism, the puritanical Saudi form of Islam, in the recent past sowed the seeds for today's problems. Not only in Afghanistan and not only in Pakistan.

Interview with Hikmet Çetin
"Western Powers Don't Know Afghanistan"
What are the main problems concerning the rebuilding of Afghanistan, what are the West's mistakes? And why are Afghan-Turkish relations so special? Hikmet Çetin, NATO Senior Civilian Representative in Afghanistan from 2004 to 2006 and former Turkish Minister of Foreign Affairs, speaks to Ayşe Karabat

Kabul Conference
Congratulations, Taliban!
Two weeks ago in the Afghan capital, 40 foreign ministers from the NATO nations basically decided that their enemy has won the war, criticises Afghan journalist Sayed Yaqub Ibrahimi in his commentary

Tariq Ali on the Flood Catastrophe in Pakistan
Victims of Corruption and Enemy Stereotypes
The flood victims of Pakistan are being left to their fate – help from the West is hesitant due to the rampant Islamophobia triggered by September 11th. The Pakistani government is paralysed and the nation's elite corrupt, criticises author Tariq Ali in his comment piece

END_OF_DOCUMENT_TOKEN_TO_BE_REPLACED
Social media
and networks
Subscribe to our
newsletter