"Egypt Is In a State of Reserve and Backwardness"

The novel "The Yacoubian Building" by Alaa al-Aswani was published five years ago by a small Egyptian publishing house. The book has since been translated into many languages and won several prizes. Mona Naggar spoke to the author

Alaa Alaswani: "There was once a very different kind of Egypt, a liberal Egypt in which many different cultures lived side by side - a truly open society"

Alaa al-Aswani: It took me three years to write my novel. In the first two years, the book bore the title Wust al-Balad. Then I didn't like the title any more and thought about using the name of a famous building as the title instead. I decided to use the building with the name Yacoubian. I once had a dentist's practice there.

But it was my relationship to Wust al-Balad and not to the building that moved me to write the novel. For me, Wust al-Balad is not just any old place in Egypt. For me it symbolises an era. There was once a very different kind of Egypt, a liberal Egypt in which many different cultures lived side by side; a truly open society. There was an Egyptian interpretation of Islam. 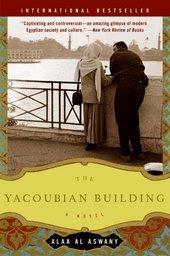 Cover of the English edition of "The Yacoubian Building"

​​For hundreds of years, bars, nightclubs, mosques, and churches stood side by side in Egypt. Everyone was free to do whatever he or she liked. Several events and developments turned the atmosphere in this country on its head: one such event was the defeat at the hands of Israel in 1967, another the lack of democracy.

The major national cause disappeared with the Camp David Agreement in 1979. Finally, thousands of Egyptians went to Saudi Arabia in search of work and came back with the Saudi version of Islam. The Saudi version of Islam is largely responsible for the state of reserve and backwardness in which we now find ourselves. I was gripped by a nostalgia about Wust al-Balad and it was this nostalgia that drove me to write this novel.

One of the central characters in your novel is Taha, the son of the janitor, who changes from an ambitious student to a violent Islamist. What was it that made you want to create this character?

Al-Aswani: Even though Islamism has been a factor in our lives for decades, characters like Taha are rare in contemporary Arab literature. I tried to describe the transition he goes through from a shy, peaceful, pleasant young man to a violent Islamist who has no scruples about killing men. I have the feeling that I have created something new with Taha.

Why are Arab authors so reticent when it comes to writing about Islamism?

For secular intellectuals, Islamists are "religious fascists". The confrontation between the Marxists and the Muslim Brotherhood that dominated Egypt and the Arab World in the 1950s and 1960s is being handed down from one generation to the next. Many writers do not succeed in freeing themselves from this sentiment and from their political convictions when writing. They should.

You are active in the Egyptian opposition movement "Kifaya" and regularly write columns about topical political issues. Do you consider it important to tackle issues that are discussed by the Egyptian public - such as torture or corruption - in your literary works?

Al-Aswani: Social or political issues do not motivate me to write novels. I seek to create literature (…) not to liberate people or to call for equal rights for women. I tackle issues such as these in my columns or articles. What's more, I don't believe that the issues that are raised in a novel have to be as serious or as important as these to ensure success. In this regard I agree with Gabriel Garcia Marquez who said that a good novel always has a good theme, but that a good theme does not always make a good novel.

The Yacoubian Building is your second novel. When did you decide to become a writer?

Al-Aswani: My father is a well-known writer in Egypt and I grew up in a house where literature was always in the air. When I came home from school, my mother always asked me to be quiet so as not to disturb my father, who was busy writing. I later found out that my father counted some of Egypt's best-known writers and artists among his friends. I knew at the age of ten that I wanted to become a writer. It became my dream.

But you can't live on writing in Egypt. You always have to have a second job. My father, for example, was a lawyer. Alternatively, you write for television or the theatre. I decided to study dentistry. I studied dentistry in Egypt and the USA. As a dentist, it is easy to divide your time between practising as a dentist and writing. It also brings me into contact with a broad variety of people on a daily basis. This is a real treasure for a writer.

How do you divide your time between writing and dentistry?

Al-Aswani: I get up at 6.00 and write from 6.30 until 10.00 o'clock, regardless of how I am feeling. Sometimes I am very tired, but I stick to this rhythm; my biological clock has got used to it. I always wake up early, like a boxer, five or six days a week. You cannot write a novel if you are not disciplined. And my novels are relatively long.

My latest novel, for example, is about 460 pages long. I have been working on it for between two-and-a-half and three years. I have no social life during the week. Because my practice is in the same building as my home, I save time. For me, the weekend begins on Thursday evening. I regularly chair literary meetings in the evenings, which gives me a chance to sit down with my friends. On Friday evening, I go out with my children.

The Yacoubian Building is a success in the Arab world to this day. The film was also a success and a television series is currently in the pipeline. Has the success changed you?

Al-Aswani: I have not changed, but my life has changed totally. I travel like mad. My diary for this year is already full until September. Despite the fact that I decline a large number of invitations, I still travel abroad twice a month. I do find the travelling very strenuous, but it is marvellous all the same. I can't complain, after all I worked very hard for this success for many years.

Cairo Book Fair
Trying for an International Image
The Arab world's largest book fair, which closed on 4 February, was offering books to the public at reduced prices. This year the featured country was Italy. Mona Naggar reports

END_OF_DOCUMENT_TOKEN_TO_BE_REPLACED
Social media
and networks
Subscribe to our
newsletter