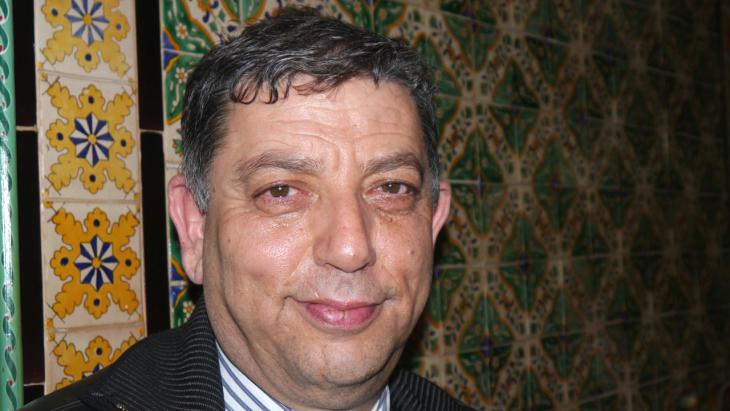 Interview with Alaya Allani, an expert on Islamism
"The jihadists have no social base in Libya"

Alaya Allani, professor of contemporary history at the Monouba University in Tunis and a specialist on Islamist movements, does not expect that the IS terrorist militia will be able to establish itself in Libya over the long-term, although the jihadists have already successfully formed cells in some regions of the country. Beat Stauffer spoke to him in Tunis

Just a few months ago, you took a clear stand against "Fajr Libya". Now you are calling for negotiations with the Islamic militia. How do you explain your change of position?

Alaya Allani: The situation in Libya has been very much in a state of flux. This means you have to adjust any political analysis to the real situation. There is no doubt that these days, the country is deeply divided. The capital Tripoli and almost all of the western regions of the country are de facto under the control of the "Fajr Libya" militia (Libya Dawn). The ongoing confusing situation in Libya is increasingly turning into a regional problem. In order to prevent the worst-case scenario, almost all of the countries of northern Africa hope that there will be a negotiated settlement, although they have no great sympathy for "Fajr Libya".

Is this also the case with Tunisia?

Allani: Yes, it is. Just look at the situation. "Fajr Libya" controls the borders to Tunisia as well as to Algeria. These borders are of vital importance, especially for Tunisia. This is why Tunisia launched an initiative this May promoting a negotiated settlement. Abdelhakim Belhadj, the former chairman of the Tripoli Military Council and representative of "Fajr Libya", travelled to Algiers on an official mission. In addition, the prime minister of the government in Tripoli was recently received in Tunis by President Béji Caid Essebsi.

Until now, the Tunisian government has always refused to recognize the government in Tripoli…

Allani: That is true. Tunis officially recognizes only the government in Tobruk. Yet, actually, the Tunisian government is prepared to cooperate with the government in Tripoli. For this reason, it recently opened a consulate there. This pragmatic approach makes sense, particularly as numerous concrete problems must be solved. 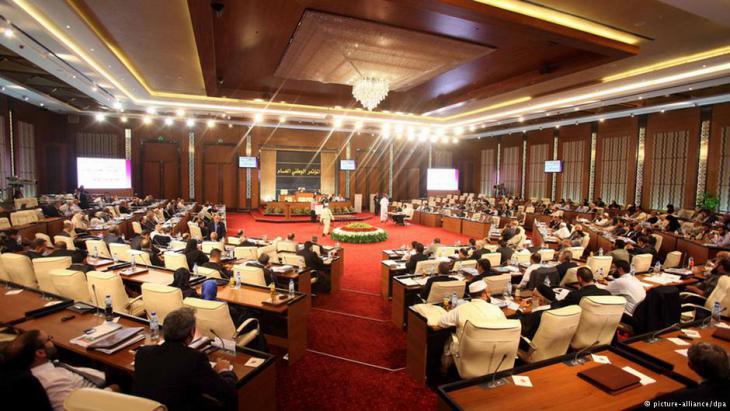 A tug-of-war for power: For months now, the two governments in Libya and their militias have been wrestling for control of the state and society. One is the internationally recognized government in the eastern Libyan city of Tobruk, while the other in Tripoli is dominated by Islamists. The capital and almost all of the western regions of the country are de facto under the control of the "Fajr Libya" militia

"Fajr Libya" has increasingly been distancing itself from radical movements recently. Can this be seen as credible?

Allani: The official representatives of "Fajr Libya" have no other choice than to distance themselves from radical groups. As we are well aware, the group "Ansar al-Sharia" has been designated as a terrorist organization by both Tunisia and the USA. If "Fajr Libya" wants to negotiate with these states, then a distancing is inevitable.

Could this lead to a rift within "Fajr Libya"?

Allani: It is a possibility. However, you have to realise that the most powerful group within this militia organization is neither the Muslim Brotherhood nor the members of the former Islamist brigade under the leadership of Abdelhakim Belhadj. It is rather the so-called "independents" from Misrata, who are primarily backed by businessmen. They have joined forces principally out of a sense of tribal solidarity with Belhadj. It is very much in their interests that a national dialogue is successful. Belhadj and the Muslim Brothers, for their part, know quite well that they are in the minority and that their popularity has declined. They are therefore compelled to make compromises. Belhadj travelled to Algeria, although he is well aware that his group and the Muslim Brothers are not particularly respected in that country. Conversely, Algeria is also compelled to negotiate with "Fajr Libya".

What role does Libya's civil society play in this attempt at a national dialogue?

Allani: It plays an important role. I recently met a Libyan civil society delegation in Tunis. They had prepared a document intended to serve as a basis for national reconciliation. It includes proposals such as the disarming of militias, the completion of a constitution, and the holding of new parliamentary elections in order to find a way out of the current impasse. In my opinion, this initiative carries great weight, as it is supported by representatives of around 100 Libyan tribes as well as 1,300 well-known public personalities, such as lawyers and doctors. This initiative represents all of the various social currents in Libya.

Yet up until now, all attempts to negotiate a political solution have failed...

Allani: The main problem is that radical groups within "Fajr Libya" as well as certain militias want to prevent a negotiated settlement from being reached. These players have an interest in seeing the Libyan state remain weak. The recent kidnapping of over 100 Tunisians in Tripoli is perhaps part of the strategy of Ansar al-Sharia to torpedo such a solution. However, I remain confident that a negotiated settlement can be achieved. 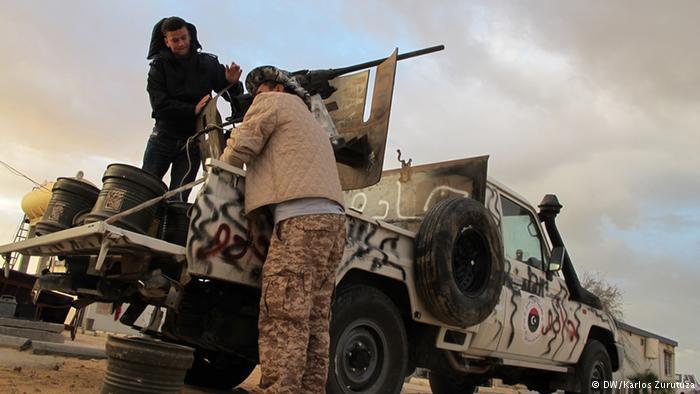 Hopes for an end to the bitter fighting between Libya's hostile militias: Negotiations with the "government of national salvation" and with the Fajr Libya are inescapable, not only for domestic political reasons. The neighbouring countries of Tunisia, Algeria, and Egypt are also demanding a pragmatic solution. At present, the precarious security situation and the threat posed by jihadist groups permits no other option.

It appears that the IS militia is also making advances in Libya. Sections of Sirte, the birthplace of Gaddafi, are currently under the control of "Islamic State". Should we prepare ourselves for a scenario similar to Syria?

Allani: No. First of all, it should be borne in mind that the denominational structure of Libya is completely different to that of Syria or Iraq. The country has no divisions between Shia and Sunni, as all Muslims in Libya are all of the Sunni Maliki orientation. The fact that the IS could build cells in Sirte and Derna is mainly due to the absence of a robust, centralized state. In my opinion, the jihadists in Libya lack a social base. At present, the IS in Libya is being fought by "Fajr Libya" as well as by the army of General Haftar ("Karama"). This is why I do not think that the terrorist group will be able to permanently establish itself in Libya. As soon as the national dialogue attains success, the jihadists will be forced to flee the country – probably to Mauretania or other Sahel states.

Around two years ago, an offshoot of al-Qaeda in the Islamic Maghreb was formed in Jebel Chaambi in Tunisia on the border with Algeria. The Tunisian army has not been able to oust or capture these jihadists. How dangerous is the situation for Tunisia?

Allani: The "Okba Ibn Nafaa" is currently the only jihadist group that poses a real danger for Tunisia. "Ansar al-Sharia", the most active jihadist organization in recent years has, for the most part, been crushed in Tunisia. Around a thousand of its fighters have been imprisoned and the others have gone underground in Libya or in the Chaambi mountains. The terrorist attack on the Bardo Museum could be interpreted as revenge for this "zero tolerance" policy of the authorities. Some former members of Ansar al-Sharia are now fighting with the Okba Ibn Nafaa Brigade, while others are probably forming sleeper cells that remain in contact with it.

Nonetheless, I view the jihadist danger in Tunisia as relatively small. The government under Prime Minister Essid is pursuing a new and successful strategy in the fight against jihadists. It is also obvious that the terrorists hardly have any support among the population.

Can it then be assumed that the Okba Ibn Nafaa Brigade will associate itself with the IS terrorist militia?

Allani: In this regard, everything points to divisions within al-Qaeda in the Islamic Maghreb. Recently, the Mauritanian news agency Al-Akhbar, which is affiliated to al-Qaida, reported that the "Al-Murabitun" jihadist organization has aligned itself with IS. Yet, soon afterwards, Mokhtar Belmokhtar, head of the group, denied the claim and declared that his organization remained loyal to al-Qaeda. Al-Murabitun was responsible for the terrorist attack on the Algerian gas field of In-Amenas as well as the attack on a hotel in Mali in March of 2015. In my opinion, this de facto division can be interpreted as a sign of the current weakness of al-Qaeda in the Islamic Maghreb.

(This interview was conducted before the Sousse attack in Tunisia on 26.05.2015)

Algeria's decision to unilaterally sever diplomatic ties with Morocco in August 2021 – days after the presidency announced in a statement their relations would be reviewed – was ... END_OF_DOCUMENT_TOKEN_TO_BE_REPLACED

Madrid's about-face on the Western Sahara conflict has enraged Algeria. Trade relations have been frozen unilaterally and a cut in gas supplies to Europe could be in the pipeline ... END_OF_DOCUMENT_TOKEN_TO_BE_REPLACED

Sultana Khaya, 41, has been peacefully resisting the Moroccan occupation of Western Sahara for many years. Because of her campaign to assert the self-determination of the Sahrawi ... END_OF_DOCUMENT_TOKEN_TO_BE_REPLACED

Since Spain abandoned its traditional neutrality towards the conflict in Western Sahara, Morocco has announced a "new phase" in relations between the two countries. But what is ... END_OF_DOCUMENT_TOKEN_TO_BE_REPLACED

An increasing number of government ministries in Algeria are announcing they will abandon French in future. They may be reacting to the mood among the population, but the move is ... END_OF_DOCUMENT_TOKEN_TO_BE_REPLACED

Russia's ranking on the World Press Freedom Index has fallen again over the Kremlin's wartime censorship of the Ukraine conflict. From Myanmar to Mexico, journalists continue to ... END_OF_DOCUMENT_TOKEN_TO_BE_REPLACED
Author:
Beat Stauffer
Date:
Mail:
Send via mail

END_OF_DOCUMENT_TOKEN_TO_BE_REPLACED
Social media
and networks
Subscribe to our
newsletter