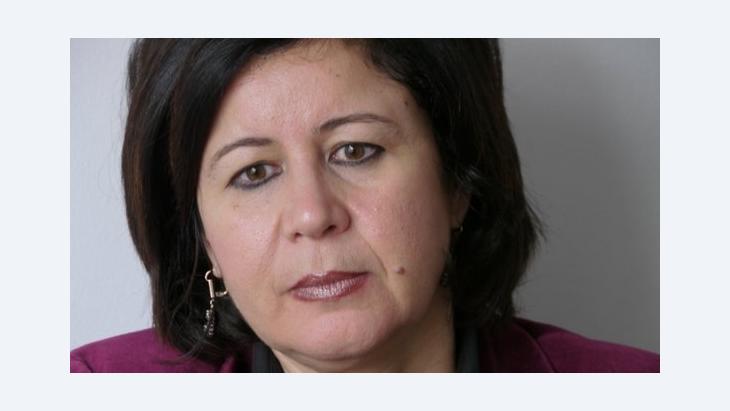 Tunisia's process of democratic transition has been stagnating since late 2012. The Tunisian people are still waiting for their new constitution. The situation has been exacerbated by the recent murder of opposition politician Chokri Belaid. Ute Schaeffer and Loay Mudhoon spoke to the renowned academic Amel Grami about Tunisia's political crisis

Tunisia is the "cradle of the Arab Spring" and was viewed as a model state in North Africa. But the transitional process has been stagnating for six months now. In your opinion, what are the greatest obstacles to democratic change?

Amel Grami: Our political consciousness is certainly not incredibly sophisticated. Almost all political players are unaware of the demands posed by the process of democratic change. But at the same time, it's also clear that Tunisia's governing Ennahda party is presenting the nation with an ambiguous discourse.

What do you mean by "ambiguous discourse"?

Grami: There are two points here in my view. On the one hand we have the discourse that Ennahda is presenting to the international community; it features terms such as democracy, human rights and the like. The other is the discourse of the mosques and backrooms, an approach that Ennahda uses to address its own members and supporters.

There is secretly filmed video footage of speeches by Ennahda leader Rachid Ghannouchi being screened in small towns and mosques away from Tunis. It is here that he promotes this second kind of discourse, saying for example that there is no place for secular forces in Tunisia. Ghannouchi has said that Ennahda must ensure that all women are married, which is clear evidence of the fact that he is against unmarried women.

The second point concerns how protests are dealt with: in the past, the police have launched attacks on peaceful protests by secular groups. In contrast, protests by religious parties are given police protection – on the orders of Ennahda.

How much popular support does Ennahda have right now?

Grami: The reaction of people on the street represents a paradox. Many people regret having voted for Ennahda and are dissatisfied with the party's political performance.

But we're also seeing increasing turbulence and dissatisfaction within the Ennahda movement itself – and that although Ennahda is actually a tightly-run cadre organisation. One of their members of parliament even resigned a few weeks ago. Moreover, Abdel Fattah Mourou, the party's number two after Ghannouchi, is now making no secret of his dismay at Ennahda's course. 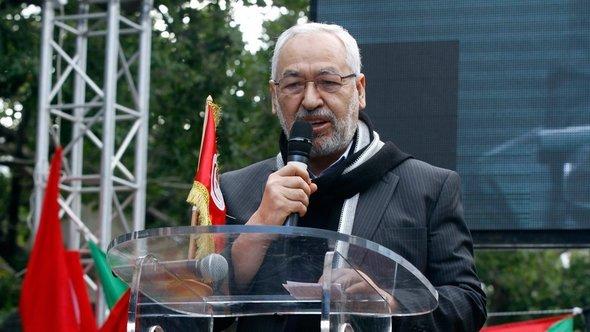 Strategy of creeping Islamisation: critics accuse Rachid Ghannouchi, the leader of the Ennahda Party, of chipping away at guaranteed basic democratic rights in Tunisia and driving forward the Islamisation of state and society

Radical Islamic groups are hitting the headlines in post-revolutionary Tunisia. Who is supporting the Islamist parties and above all the Salafist groups?

Grami: Here in Tunisia, we assume that all these parties are being funded either by Qatar or Saudi Arabia. The scale of this financial support was evident from the huge resources devoted to the election campaigns of these parties. Without this money, they would not have been able to canvass nationwide.

As for the secular parties, they had little opportunity to canvass outside the big cities.

What might happen if the new government does not succeed in overcoming the political blockade and above all tackling the nation's urgent economic problems?

Grami: We will presumably return to a pre-revolution phase. It would be tragic if this were to happen because it would mean that the idea of a civil society would be dead and buried. We're already seeing clear evidence that people are turning away from politics, and this will manifest itself in low voter turnout at the next elections.

Most Tunisians are realising that the new elite has the same priorities and interests as the old regime, namely first and foremost their own. In their view, this is just a changing of the guard, not genuine change. Some Tunisians are saying that the demands of the revolution were bread, water and the end of Ben Ali. Now, Ben Ali has gone, but so too have the bread and water.

And how can this blockade be overcome?

Grami: Our society is presently in a state of extreme polarisation, one that peaked with the cold-blooded murder of opposition politician Chokri Belaid on 6 February. We are witnessing political collisions, conflicts and insurmountable differences between the political protagonists.

There is a complete and utter lack of any concrete approaches to dialogue over how the constitution might be hammered out or solutions to our economic problems could be found. But without dialogue, the transitional process cannot succeed.

The West sees the spectre of a possible Islamist dictatorship on the horizon. How real is the danger of an Islamisation of Tunisian society?

Grami: There is a kind of Islamisation taking place already, one which is not officially admitted, but which is evident from the conduct of teachers. They are trying to impose gender separation, for example, although there are no regulations that require it.

It's a strategy of creeping Islamisation. Ghannouchi is convinced that this method of making gradual changes is the right one, because he knows that there would otherwise be a confrontation between modernising forces and conservative Islamic forces. 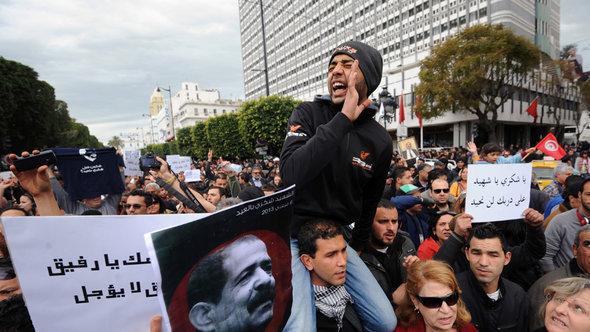 Anti-Ennahda demonstration in Tunis following the murder of opposition politician Chokri Belaid: according to Amel Grami, Tunisian society is currently in a state of extreme polarisation and the differences between the different political camps are insurmountable

Ghannouchi has repeatedly been asked whether existing human rights standards and women's rights in Tunisia will be reversed. His answers have always been diplomatic: "Laws cannot change a society, unless of course society welcomes these changes."

What we are seeing now is that these changes in Tunisian lifestyle are increasingly approximating the Wahhabi model. This is because a great number of preachers came here from the Gulf region in the direct aftermath of the revolution. Civil society organisations, such as women's associations, resisted this vehemently at the time. As a result, the activities of these individuals became more clandestine.

But now, this invasion of preachers has even reached Tunisia's universities and the "hawks" within Ennahda. Many investors from the Gulf are making common cause with Wahhabi preachers in Tunisia.

What can – or should – Europe do to help Tunisia in this transitional phase?

Grami: Europe is experiencing an economic crisis and is too busy dealing with its own problems. This limits what it can do in terms of foreign policy. The European Union quite correctly demands the observance of particular human rights standards, while donors from the Gulf seek greater political influence and demand respect for their conservative perception of religion in Tunisia.

Can Turkey serve as a model for Tunisian democracy?

Grami: I don't think the Turkish model can be applied to Tunisia. Ennahda's promotion of the model was only used in the election campaign and as a way of cultivating Tunisia's image in Europe. But the idea hasn't been discussed here for a year now; it has been forgotten.

The devaluation of the Egyptian pound combined with rising food prices is taking its toll on Egypt. More and more people are slipping into poverty. Karim El-Gawhary reports from ... END_OF_DOCUMENT_TOKEN_TO_BE_REPLACED

Egyptian Sufis have been on the defensive against the country's Islamists for decades. Meanwhile, interest in mysticism is growing among the young members of Cairo’s middle and ... END_OF_DOCUMENT_TOKEN_TO_BE_REPLACED

Abortions are illegal in Egypt unless they are necessary to save a married woman's life. But that doesn't stop local women from having one. Egyptian society needs to acknowledge ... END_OF_DOCUMENT_TOKEN_TO_BE_REPLACED

Food prices doubled, salaries halved, banks restricting withdrawals: Egyptians now have the same problems as the Lebanese. But if things get worse here, the fallout will be far ... END_OF_DOCUMENT_TOKEN_TO_BE_REPLACED

Giessen, Eichsfeld, Kusel, Berlin – cars bearing old German number plates are the latest trend on the streets of Cairo. Many Egyptians regard the discarded plates as chic. What ... END_OF_DOCUMENT_TOKEN_TO_BE_REPLACED

END_OF_DOCUMENT_TOKEN_TO_BE_REPLACED
Social media
and networks
Subscribe to our
newsletter