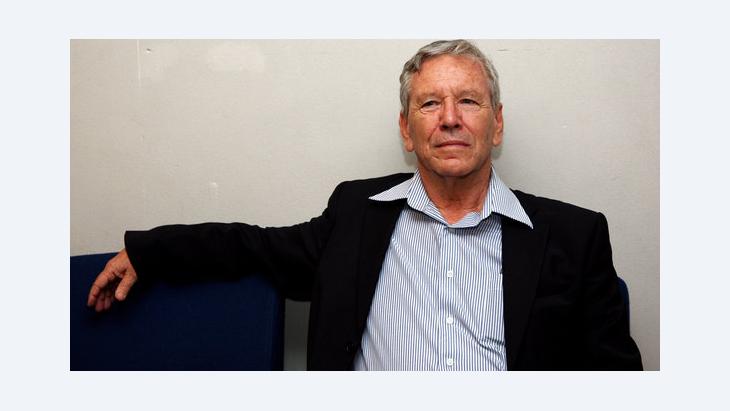 ﻿The great Israeli writer Amos Oz on his early years in a kibbutz, the influence of the settlers movement on Israeli politics, and the prospects for the peace process. An interview by Inge Günther

Do you have still some longings for the kibbutz?

Amos Oz: Yes, I still have longings to certain moments in kibbutz life. My family and I have left kibbutz Hulda 25 years ago and it still comes back to me in my dreams.

Amos Oz: Six o'clock in the morning on a normal working day in the dining room. Everybody there is up for an early cup of coffee before going to the fields. The man in charge of the morning papers is distributing them to everybody. The People are sitting there with the coffee, looking at the papers and discuss politics at 6 am in the morning. It's a moment I miss.

Some of the characters in your book "Between Friends" have problems with kibbutz life. Their individuality sticks out of the collective, for example in one of the short stories the father Roni Schindlin loses it after his little son runs away from the children's house weeping.

Amos Oz: The son got abused by other kids and the father gets angry and forgets all the principles and goes to the children house and beats the wrong child. I write about the mistreats, the extraordinary people, not the normal people. 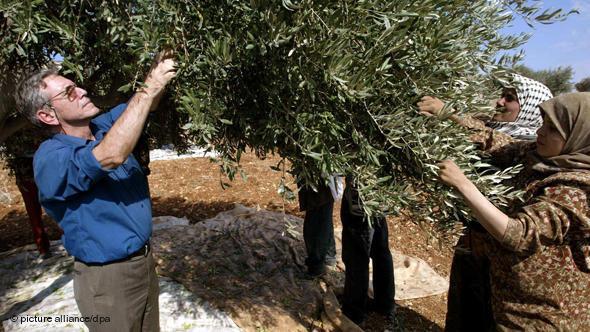 Symbolic solidarity with Palestinians: Amos Oz gives a helping hand during olive harvesting in the Palestinian village of Akrabe in the West Bank

So kibbutz life was never as idyllic as some believed?

Amos Oz: The kibbutz movement was born out of a monumental dream, more ambitious than any other revolutionary idea in the 20th century. The founding fathers and mothers of the kibbutz hoped not only to change the regime, not only the social system, not only the class system. They wanted to revolutionize human nature. They believed that if they built a society where everybody eats the same food, dresses equally, works in the same way and shares the same standard of living, then selfishness and egotism will go away and a new kind of human being will prevail.

This was a false thought. As soon as they realized that their ideal could not be fulfilled, internal conflicts came up, the internal tensions between the great ideas and part of everyday reality. There were complaints, frictions out of the close proximity to each other. There were misunderstandings, bad blood and gossip.

On the other hand the kibbutz, where people tried to live according to their ideas, was an inspiration to many people around the world. Not only for socialists but also for the alternative scene in the seventies.

Amos Oz: Among all revolutionary concepts of last century the kibbutz revolution was the only one without firing squads, gulags and concentration camps. There were not even a police station and policemen in the kibbutz. I don't call it a success, but it was no failure either. They created a society with a high degree of mutual responsibility.

Think of the old shoemaker in the last story. He is an idealist, an internationalist and a pacifist. A world reformer until his last breath. And a very devoted man, devoted to his work. 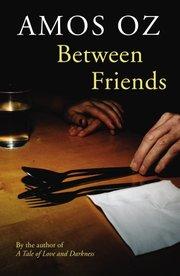 By his own account Oz was "a disaster as a laborer... the joke of the kibbutz". His latest book, "Between Friends", takes a look at Oz's early kibbutz years

He has no family, no children, no wife, nobody. If he would live in a big city such a guy would die like a dog. In the kibbutz he lives a sheltered life. He is surrounded by the world of the community. But human nature doesn't change. If I think about the question what changed in the way of love-making since the days of King Solomon to our days – maybe the cigarette after, nothing else.

How real are the characters in your stories?

Amos Oz: When the book was published in Israel everybody in kibbutz Hulda, where I lived, read it, looking quickly for themselves or for their neighbours – but they didn't find them. I had a neighbour in Hulda who used to say once that every time when walking by, before he passes by the window of my study room, he stops for a moment and combs his hair. So if he gets into one of my stories he will be well combed. These characters in the book are invented but based on my experience.

The kibbutz was for me the best possible university. I learnt more about human nature than if I had travelled ten times around the world instead. It was a small world of 500 people, men, women, children, old and young. I knew them all. I knew all their secrets. I knew all their private lives. I knew who is doing what with whom behind whose back. Everything. And they knew all about me, but I don't complain, it's only fair. If I had lived instead in Tel Aviv or Berlin something like that would have been impossible.

Did you enjoy diving into old memories when writing the stories?

Amos Oz: Every writer drives on memory, whether Tolstoy, Faulkner or Grass. Memory is the treasury of the writer. Literature comes from memory. Writers are funny creatures. They're born with their necks and heads turned backwards, a kind of monsters. Literature is a combination from experience, memory, imagination, fantasy, dreams, speculation. From all of that a bit.

The kibbutz was very much a centrepiece of Israel during those founding years. And it has become quite marginal today. Do you still find some things in modern Israeli society which reminds you to the times of the kibbutz?

Amos Oz: Oh yes! There is a powerful kibbutz gene in Israeli society of today. Look at the anarchism, the argumentativeness, nobody will tell you or me what to do. Everyone knows better, everyone is a social equal. All of that comes from the kibbutz.

Let me tell you a little anecdote. Stanley Fischer, former president of the Bank of Israel, went to Cyprus for a week with his wife to relax. The flights left a midnight and arrived in Cyprus at 1 am in the morning. And so at 1.30am the president of the Bank of Israel stands by the conveyor belt waiting for the luggage to arrive. He is approached by another passenger from Israel: "Excuse me, Sir, are you the director of Bank of Israel? Then may I ask you a question: Is it better to change money here at the airport or tomorrow in town? I m sure that would not have happened to a German Bankdirektor."

What's behind it, is it chutzpah?

Amos Oz: Not exactly chutzpah. He was not rude to him. He was direct. He speaks to the director as an equal. This is the kibbutz gene. I like this gene very much. It's not what I like best of Israel. I have to make a little confession here: I love Israel even at times when I don't like it. If I had to collapse in the street, I would prefer to collapse in Israel than anywhere else, not Germany, not in USA. Because I would be approached immediately by Israelis who put me back on my feet.

Let's look into politics. The kibbuzniks in the early years were pioneers. They were the avant-garde. Today the settlers in the West Bank see themselves as pioneers.

Amos Oz: There is all the difference of the world between the kibbuzniks of 60 years ago and the settlers. The kibbuzniks didn't want to take away anybody's land. 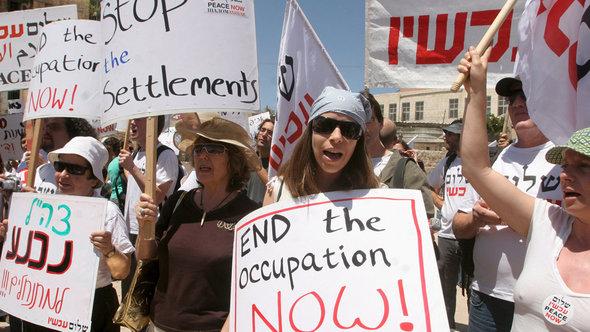 ​​They settled deliberately in the empty spaces of the country, in the swarms and in the wilderness where there was no population at all. But the setters today are aiming to take away the land from the Palestinians.

But today the settlers' political influence is enormous, similar to the influence the kibbutz movement once had on state policy. What makes the settlers such a strong dynamic force in today's Israel?

Amos Oz: They're over-represented, because our political system favours pressure groups. And they are a very effective pressure group, like the ultraorthodox religious sector. But they are a minority. The fanatics obviously lost the election. The coalition of settlers, ultraorthodox and Russians is over. What we're going to have now I don't know exactly. But it will be a government of the right-wing and the centre instead of a government of the right and the far right. This is not my ideal, but it is an improvement.

Maybe the first step to the return of political sanity?

Amos Oz: Possibly. If you pass a referendum in Israel what will happen in the end? More than 70 percent will vote in favour of two states. The vast majority of Israeli Jews already said good-bye to the West Bank. They don't go there.

Have you been there?

Amos Oz: I don t go there unless I'm invited by Palestinians.

You called Prime Minister Benjamin Netanyahu a coward. Do you have hope that he might dare to confront the settlers' lobby?

Amos Oz: I'm not quite sure about it. But Netanyahu is now more afraid of world opinion and international pressure than of the settlers. So cowardice can work both ways.

That means international pressure is needed?

Amos Oz: There is some international pressure but there is also internal pressure from the electorate on Netanyahu to display to more pragmatic positions. And he may succumb to this pressure because he is not a brave man.

But do you believe that Israelis are ready to accept the pains of compromise?

Amos Oz: People do what is needed to be done as long as they know that they are no suckers. They don't want the Gaza scenario to repeat itself. Gaza was a harsh blow to the peace movement which said let's go out of these territories and we'll have peace. We got out of Gaza and got thousands rockets. So Israelis don't want to have the same scenario in the West Bank. But if the Israelis are convinced that giving back the West Bank will bring peace, you'll have a safe majority.

With reported hostilities against Israeli journalists and the flag of the Palestinian territories flying on the streets and in the stadiums, it is clear the World Cup in Qatar is ... END_OF_DOCUMENT_TOKEN_TO_BE_REPLACED

When is it and when is it not acceptable to display a political banner at the World Cup in Qatar? The answer seems to depend largely on the political message, with fans ... END_OF_DOCUMENT_TOKEN_TO_BE_REPLACED

A leading light of Israeli theatre, Ofir Henig has directed the Israel Festival and is the only female director to have been awarded the Israel Theatre Prize. These days, however ... END_OF_DOCUMENT_TOKEN_TO_BE_REPLACED

With the current leadership of Iran quick to lay the blame for the Iran protests on Israel, the chances of harmonious relations between the two countries still seems remote. Yet, ... END_OF_DOCUMENT_TOKEN_TO_BE_REPLACED

Daniel Barenboim is not only a world-famous pianist and conductor. He has also worked tirelessly to foster understanding and reconciliation between Palestinians and Israelis. By ... END_OF_DOCUMENT_TOKEN_TO_BE_REPLACED

After a two-year hiatus, the Arab League re-convened at the beginning of November in Algiers against a backdrop of uncertainty and discord. By Pierre Boussel END_OF_DOCUMENT_TOKEN_TO_BE_REPLACED
Date:
Mail:
Send via mail

END_OF_DOCUMENT_TOKEN_TO_BE_REPLACED
Social media
and networks
Subscribe to our
newsletter