"The Dialogue between the Cultures Is My Life's Work"

André Azoulay, advisor to the King of Morocco, is an anomaly in the Arab Islamic world: he is the only Moroccan of the Jewish faith to belong to his country's inner circle of power and has done so for 20 years. For many years now, Azoulay has actively promoted dialogue between the cultures and religions. Rim Najmi met him in Rabat 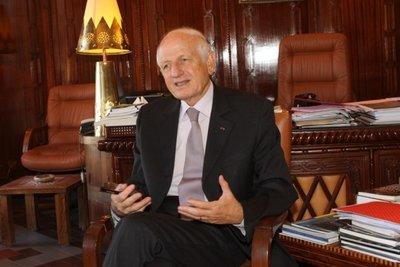 "It never occurred to me that we would once again find ourselves discussing theories that consider a clash of civilisations and a conflict of the religions as a given," says André Azoulay

​​Mr Azoulay, you will take part in the international "Qantara.de conference" in Berlin at the end of the month. The theme of this conference is the role of the media in the dialogue of the cultures. What do you hope to achieve by participating in this conference?

André Azoulay: Well, the fight for dialogue between the cultures and religions is my life's work. For about half a century now, I have been dedicating myself to this task. It may well be that I will not live to see these efforts to bring about a real and honest dialogue bear fruit. Nevertheless, my dedication to reaching this goal is, for me, an obligation, and one from which I cannot and will not withdraw. I am actually more involved in these issues now than ever before.

And it is desperately important too because the world has unfortunately taken a step backwards in some respects and forfeited its ability to be reasonable. It never occurred to me that we would once again find ourselves discussing theories that consider a clash of civilisations and a conflict of the religions as a given. For example, my own culture as an Arab Moroccan of the Jewish faith is not a culture of confrontation or of rejection of others. On the contrary, I consider it a culture of openness and intellectual encounter.

Perhaps we pray to God in different languages, depending on the language in which our holy books were written. But at the end of the day, it is still the same God for all believers.

The world must be aware of the model of peaceful co-existence we put into practice here in Morocco. Religion and culture have been abused for political ends, often to give them the blame for political failure.

The tragedy in Palestine is real, but not because it is a conflict between Islam and Judaism. It is much more true to say that political problems are at the root of this conflict, and political solutions should be used to resolve it. Those who use the rhetoric of conflict and the clash of civilisations and religions to distract us from the real causes are ultimately the ones who bear responsibility for the current situation.

You are renowned for your work to bring about an independent Palestinian state existing side by side with Israel. In view of the current political tensions, what, in your opinion, are the chances that a two-state solution will actually come about? Are you still optimistic?

Azoulay: Well, first of all, I am not willing to capitulate. Although my work has not yet received the recognition it deserves, I have been fighting for the idea of an independent Palestinian state for about 50 years now. In the days when I fought for the Jewish cause – shortly after I set up the group "Identity and Dialogue" in Paris in 1973 – I had my first meeting with the PLO. 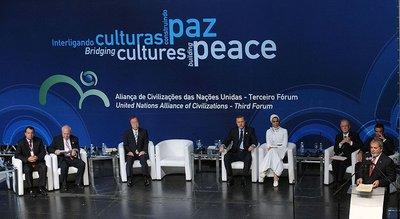 Third forum of the Alliance of Civilizations initiative: According to Azoulay, the long-term goal of the Anna Lindh Foundation is to enhance awareness among all 750 million people in the Mediterranean region of the necessity of a joint approach to the challenges of the future

​​At that time, I was an integral member of the Jewish establishment, and the meeting was seen as a kind of treason towards the Jewish cause. But my friends from the group "Identity and Dialogue" and I stood together and agreed on the necessity of founding an independent Palestinian state.

I can still remember that my first meeting with a representative of the PLO in northern Morocco in 1973 had to take place in secret. This meeting was organised by the then Moroccan king, Hassan II. Later the same year, in Toledo, I met Abu Mazin (Mahmoud Abbas) and other leading figures in the PLO. And so, the old combatants were suddenly united in a front for peace, and it has remained that way for the past 36 years.

And I remember saying at the time that, as a Jew, I was of the opinion that as long as Palestine finds itself in this situation, my religion, Judaism, will remain under threat. The way I, as a Jew, saw things, I could not accept that the Palestinians should not enjoy the same respect that we did, especially in the areas of freedom and social justice, human rights or national culture.

I also pointed out that if we talked about justice, identity, honour, freedom and all the rest, then we had to work towards these goals for both peoples in the same way. There can be no honour for the Jews if the Palestinians do not achieve their honour at the same time. By the same token, there can be no divided freedom, just the one freedom that applies equally to both parties.

There is simply no alternative approach to a solution of this kind. Both sides have already tried all other solutions and all kinds of confrontation, such as war and terrorism. But all of these violent solutions have failed spectacularly. Maybe the time has come to try a solution that hasn't been tried yet: a Palestinian state that enjoys all rights and exists side by side with Israel.

The Israelis must realise that their children's future can only develop successfully together with the future of the Palestinian children. I have absolutely no doubt that there will one day be a solution. Maybe tomorrow; maybe only in 50 years' time.

Because you are the only Jewish Moroccan to have access to the inner circle of power in Morocco as advisor to the king, you are considered an anomaly in the Arab and Islamic world. Is it possible that your position sends out a certain message to Muslims?

Azoulay: First of all, I thank my country, my king and my religion for this privilege and for the responsibility that goes with it. The fact that I have this privilege is proof of the modernity and humanity of modern-day Morocco. As you have quite correctly pointed out, I am indeed the only member of my group to become part of this select circle. In this context, one must not forget that it is not much more than 60 years since the world suffered under the barbarity of National Socialism. At that time, Morocco was the only country among its neighbours to send out a message of respect, human dignity and solidarity.

I have not forgotten history; it is still very alive in me. When Muslims and Jews suffered under the Spanish inquisition 500 years ago, they stood side by side, resisting these atrocities. This shows that Judaism and Islam are indeed capable of fruitful cooperation. 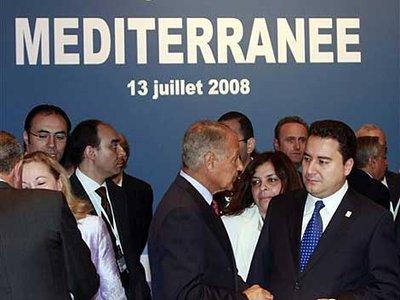 "The establishment of the Union for the Mediterranean was undoubtedly a historic step," says Azoulay, who adds that one thing the project has achieved is the fact that people on both sides of the Mediterranean can now speak of a joint "union"

​​You are president of the Anna Lindh Euro-Mediterranean Foundation for the Dialogue between Cultures. What concrete efforts is the foundation making in order to be a successful mediator between the cultures?

Azoulay: First of all, I would like to point out that I was elected president of the Anna Lindh Foundation as the candidate of the Arab League. It was the first time in the history of the Arab League that an Arab Jew was selected to represent the league in an international institution. This selection was an act of huge symbolism, as was my nomination as advisor to my king. Every Arab state is at liberty to act in a similar manner.

The Anna Lindh Foundation has set itself the task of organising joint projects and cooperation programmes within the framework of the Euro-Mediterranean partnership with civil society players in the countries of the European Union and the Mediterranean states. The aim of this cooperation is to liberate this partnership from the dependency on state structures so that joint projects can achieve more legitimacy in our countries.

Our long-term goal is to enhance awareness among all 750 million people in the Mediterranean region of the necessity of a joint approach to the challenges of the future. We have to move out of our ministerial offices and rely more on civil society players. In this regard, cultural dialogue is essential because it plays a central role in the correction of stereotypes and deficits in perception. That is our real assignment. Real cooperation is not possible without including culture.

On the initiative of France and Egypt, the Union for the Mediterranean was set up two years ago. What goals has this ambitious project reached in the intervening period?

Azoulay: The establishment of the Union for the Mediterranean was undoubtedly a historic step. It is not possible to pass final judgement on this project so soon after its launch; nor will it be possible after ten years. That being said, one thing this project has achieved is the fact that people on both sides of the Mediterranean can now speak of a joint "union". This was not previously the case.

However, the Union for the Mediterranean remains a long-term project that seeks sustainability. For me, it is particularly important that this project breathes the spirit of joint cooperation; it is a joint vision and we should give it more time and the chance to reach its lofty goals. Personally, I have the patience required because I am completely and utterly convinced of the success of this project. Just because there have not yet been any visible success stories, we should not immediately question the general direction of the union's road map.

André Azoulay is an advisor to the King of Morocco. In 1973, he founded the "Identity and Dialogue" movement in Paris, a group comprising members of the Jewish elite who spoke out in favour of the establishment of an independent Palestinian state alongside Israel. He has been president of the Anna Lindh Foundation since 2008.

Translated from the Germany by Aingeal Flanagan

Interview with André Azoulay
Cultural Dialogue – A Driving Force for Genuine Partnership
According to André Azoulay, advisor to Morocco's King Mohammed VI and head of the Anna Lindh Euro Mediterranean Foundation, cultural dialogue plays a key role in cooperation between the EU and the southern Mediterranean countries. Moncef Slimi talked to him

Essay Naika Foroutan
A Dialogue of the Cultures Instead of the Clash of Civilisations
The issue of cultural dialogue always crops up when things have already started to go wrong. But that dialogue is not some short-term emergency measure, writes Naika Foroutan. In her essay, she discusses the basic principles of dialogue

Dossier
Cultural Dialogue
Samuel Huntington proclaimed the "Clash of Civilizations". Intellectuals and cultural critics the world over vehemently disagreed, advocating an "Alliance of Civilizations" as an antidote. We have assembled a variety of views on cultural dialogue in our dossier

END_OF_DOCUMENT_TOKEN_TO_BE_REPLACED
Social media
and networks
Subscribe to our
newsletter