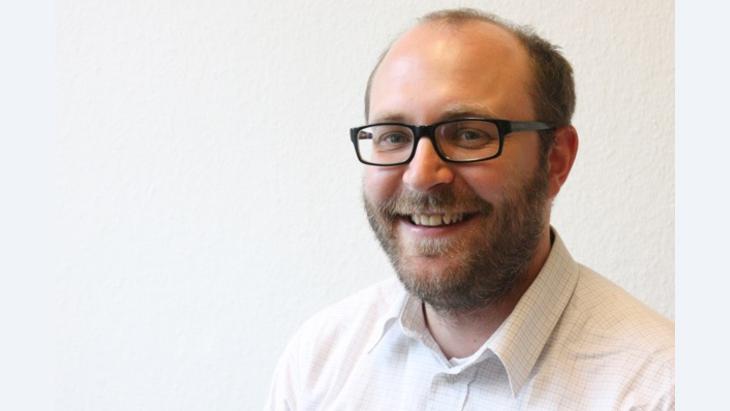 Interview with Andre Bank, political scientist
"The refugees are part of Jordanian politics"

As conflicts continue to escalate in the region, Jordan remains stable. In fact, the kingdom is actually profiting from the chaos and the refugees, says political scientist Andre Bank in conversation with Jannis Hagmann

Mr Bank, Jordan has taken in more Syrian refugees than all the nations of the EU put together. How is such a small country able to do this?

Andre Bank: Jordan has done a great deal. From the end of 2012 onwards, several hundred thousand Syrians entered the country within a relatively short time. They showed their passport, they were registered and were able to stay six months, without a visa, no problem. Jordan shouldered immense costs to cover the basic requirements of these people. They needed water and medical attention. But since the end of 2013, Jordan's border to the north has been largely closed.

How do you explain this initial openness?

Bank:  The refugees don't just cost money. Property owners in northern Jordan, for example, cashed in massively on the situation. Apartments and garages were rented out at prices up to 12 times higher than regular rates. The unofficial labour market presents a similar picture. Many companies have employed Syrians for a fifth or a sixth of the regular wage. The Syrians don't have work permits or any rights at all. Cheap labour is being exploited.

So Jordan is profiting from the war next door?

Bank: In some respects. As I said, the cost of providing basic requirements was high. On the other hand, there has been a huge influx of cash in the form of humanitarian and development aid. But even more important is that Jordan has gained geostrategic significance. The nation is located in a highly volatile region, but it is stable and being enthusiastically courted, as well as receiving a great deal of financial support. Israel needs a buffer in the crisis region. Saudi Arabia needs another stable monarchy. But Jordan is also a key partner for the EU and the US. In the event of any destabilisation process in Jordan, it would probably trigger a concerted effort to stabilise the nation. So the royal family has benefited, as have a handful of other Jordanians, but not necessarily the masses.

How many Syrians have arrived in Jordan since 2011? 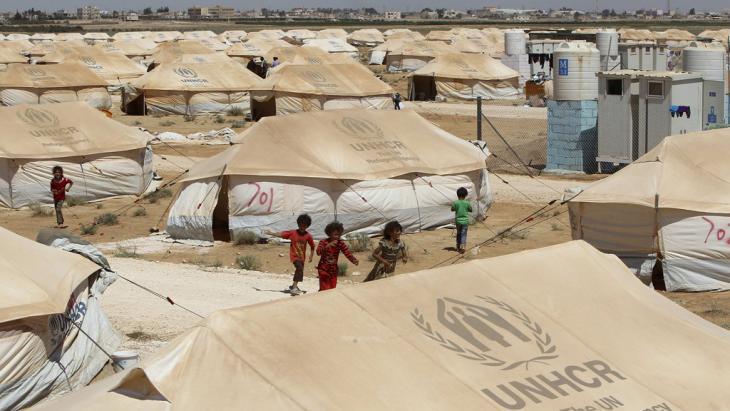 The Zaatari refugee camp in northern Jordan is the largest in the Middle East. It is located not far from the Syrian-Jordanian border in the middle of the desert. The UNHCR says it is currently home to some 80,000 people, more than half of them children. The camp was set up in the summer of 2012 in just nine days, as more and more people left Syria due to the civil war and fled to neighbouring Jordan. Jordan has taken in more Syrian refugees than Germany – although its population is ten times smaller

Bank: The figures vary greatly. The UNHCR talks of just under 650,000 registered refugees. But many aren't registered. During the London donor conference last February, the Jordanian King Abdullah II. said the figure was closer to 1.3 million. I've even read reports in pro-government newspapers claiming two million.

Those are large discrepancies…

Bank: I reckon there are between 800,000 and one million Syrian refugees in Jordan. Higher figures are politics. The refugee numbers are being used to acquire money. The higher the figures, the more important it is that Jordan remain stable. Even the King has said that Jordan is on the brink of collapse. He makes dramatic statements like this when international aid negotiations are pending. I've observed this for many years. It's strategic calculated.

The King is extorting donor nations?

Bank: I'm not criticising that. The claims are legitimate if you bear in mind what Jordan has done in comparison with wealthier nations. It would be much easier for the Gulf States, Europe and the US to deal with the problem than it is for Jordan. Nonetheless, we shouldn't be under any illusion that all the money being sent to Jordan is reaching the needy. There's a huge patronage network in Jordan and a robust state apparatus. The money is channelled via the state where a not insignificant proportion of it gets stuck. There's barely any kind of monitoring of what's really getting through.

How much aid money has Jordan received since 2011?

Bank: The amount of humanitarian aid runs to several billion Euros. At the conference in London alone, the main intake countries were promised almost six billion US dollars. Jordan must have received a significant portion of this. That's a huge sum for a nation with an annual domestic budget of between 10 and 15 billion. The primary donors were Britain, Germany, the Emirates and Kuwait. The logic: we absolve ourselves financially from the responsibility of having to look after the refugees. 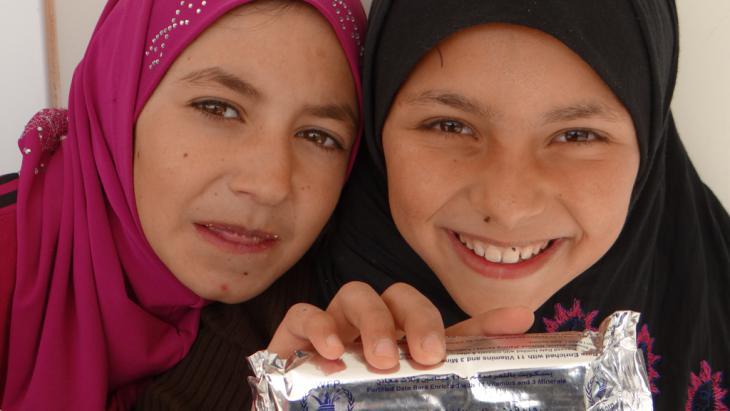 Help for the poorest of the poor in the largest Arab refugee camp: nevertheless, early this year the World Food Programme (WFP) had to reduce the value of residents' food vouchers due to a lack of funds. The UN says more than 630,000 Syrian refugees are registered in Jordan. For Jordan and neighbouring cities, the large number of refugees in Zaatari represents a burden. What was already a weak infrastructure is at breaking point, for example concerning the provision of water

Alongside humanitarian aid, there is also conventional development aid. Many new programmes explicitly mention the challenges posed by the Syrian war. And not least, Jordan profits from military aid. In Jordan, the Americans are training Syrian opposition fighters, in programmes co-financed by Saudi Arabia and the United Arab Emirates. Jordan has received extra funds for this.

When taking in refugees, has Jordan thus far made any distinction between Christians, Muslims and others?

Bank: There has been no differentiation along confessional lines, although most of the refugees are Sunni Muslims from rural areas. The one group that wasn't let in, however, were the Palestinians from Syria. The fate of the Palestinians is a tragedy that's rarely told. For a while there was a camp containing several thousand people from the former Yarmuk Palestinian refugee camp south of Damascus in the desert between Syria and Jordan. They were stranded there, because the Jordanians wouldn't allow them to enter.

Why the Palestinians in particular?

Bank: Very many Palestinians already live in Jordan. There is a reluctance to take in more Palestinian refugees from Syria, because many of them are active in political organisations such as Fatah, Hamas, the PFLP or the DFLP. Theses are groups that the Jordanian state has repeatedly locked horns with in the past.

Some Palestinians in Jordan are still deemed to be refugees, although they've lived in Jordan for decades. Does immigration history play a role in the current crisis? 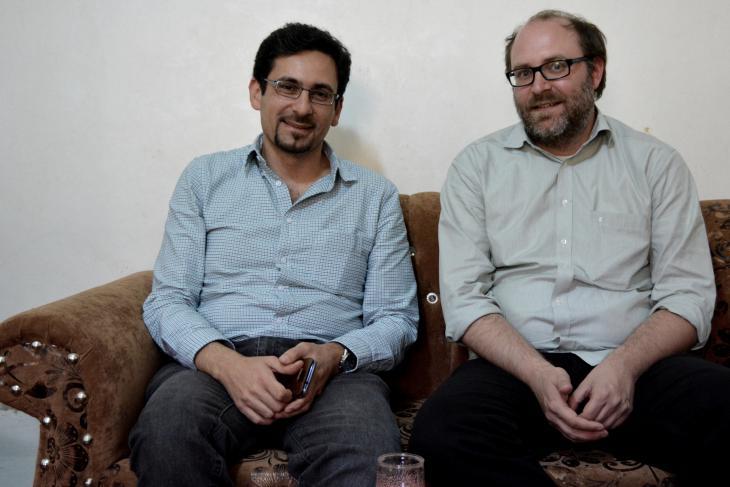 The political scientist Dr. Andre Bank (right) is a research fellow at the GIGA Institute of Middle East Studies in Hamburg. Together with the ethnologist Yazan Doughan (M.A.) he is conducting a research project on the impact of the Syrian war on the people of Jordan. They undertook their first research trip to northern Jordan in March and April

When Saddam Hussein occupied Kuwait, Jordan supported Iraq. The Palestinians were regarded as Saddam's fifth column and thrown out. Most of these returnees were wealthy, which resulted in a construction boom and a property bubble in Amman in the 1990s. Another group are the Iraqis that came after the third Gulf War, primarily in 2006 and 2007. They settled almost exclusively in Amman. They've also invested heavily in Jordan. Many continued their migration elsewhere, but 300,000 to 400,000 stayed in Jordan.

Will the Syrians also invest and boost the Jordanian economy?

Bank: No, these groups are very different from a socio-structural perspective. Back then, the Iraqis arriving in Jordan were the middle classes with status under Saddam Hussein. Many of them were Iraqi Sunnis from the Baghdad metropolitan area, many of them supporters of the old regime. Some members of the Hussein family still live in Amman, his daughter for example. Most of the Syrians are disadvantaged war refugees, a significantly poorer section of society.

Does this worry the Jordanians? Does the refugee issue figure in public discourse, as it does in Germany?

Bank: The debate has eased somewhat. Currently, the refugees aren't as much of an issue as in the years 2013 and 2014. But in everyday life, Syrians are often scapegoated, when it comes to rising prices, for instance. What's tragic is how the various communities in Jordan are closing ranks. Palestinians, Iraqis and Jordanians are blaming Syrians. There's a familiar pattern here: when the Iraqis arrived in Jordan in 2006 and 2007, it was the Palestinians and the Jordanians against the Iraqis. It's always the newcomers who are to blame. I haven't yet had any reports from Germany that migrant communities are mobilising with PEGIDA and the AfD against refugees. To be fair though, it must be said that unlike Germany, there's been very little violence against Syrians in Jordan. Conflicts are usually of a verbal nature.

Home
Print
Newsletter
More on this topic
Jordan and the influx of refugees: The true SamaritansCamps for Syrian refugees in Zaatari and Atma: Cut off from the rest of the worldThe Arab view of the European refugee crisis: Ludicrous squabbling
Related Topics
Abdullah II of Jordan, European Union (EU), Humanitarian aid, Immigration, Policy on refugees and migration, Refugees, Syrian Civil War
All Topics

After a two-year hiatus, the Arab League re-convened at the beginning of November in Algiers against a backdrop of uncertainty and discord. By Pierre Boussel END_OF_DOCUMENT_TOKEN_TO_BE_REPLACED

In the run-up to the COP27 global climate summit, hosted by Egypt in November, it is worth noting that little rainfall, aggressive heatwaves and worsening drought make the Middle ... END_OF_DOCUMENT_TOKEN_TO_BE_REPLACED

In this essay, renowned Lebanese journalist and writer Hazem Saghieh asks whether the Arab Levant, which stretches from Iraq in the east to Egypt in the west, will remain an ... END_OF_DOCUMENT_TOKEN_TO_BE_REPLACED

With his fist bump greeting for a man he previously called a pariah, US President Biden has paved the way for Saudi Crown Prince Mohammed bin Salman's return to the international ... END_OF_DOCUMENT_TOKEN_TO_BE_REPLACED

The murder of a female student at Mansoura University in the Nile Delta has sparked a long overdue debate on femicide in Egypt. Karim El-Gawhary reports from Cairo END_OF_DOCUMENT_TOKEN_TO_BE_REPLACED

When times are tough, the exchange of ideas and perspectives becomes especially important. It takes dialogue. And at Deutsche Welle, we need distributors and cooperative partners ... END_OF_DOCUMENT_TOKEN_TO_BE_REPLACED
Author:
Jannis Hagmann
Date:
Mail:
Send via mail

END_OF_DOCUMENT_TOKEN_TO_BE_REPLACED
Social media
and networks
Subscribe to our
newsletter