Interview with Angelika Neuwirth
"The Koran – A Book in Many Languages"

Angelika Neuwirth is one of Germany's most renowned Koran experts. In this interview with Kurt Scharf, she talks about the aesthetic dimension of the Koran, the trouble with translating sacred texts, and the notion of "inlibration" 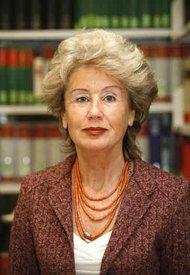 Angelika Neuwirth: "The purely norm-specific in the Koran that is common in fundamentalist circles today does not do justice to the Koran"

​​You chose the title "The Koran – A Book in Many Languages" for a lecture you once held. Isn't that somewhat risky? Wasn't the Koran – according to the understanding of most Muslims – revealed by God himself in the Arabic language, such that it cannot be adequately translated or that translations serve merely as an aid for those who don't understand Arabic at all or not well enough?

Angelika Neuwirth: The title was meant to be provocative. The narrow perspective on the purely discursive, the norm-specific in the Koran that is common in fundamentalist circles today does not do justice to the Koran. If we look at the history of the Koran, it is clear that the aesthetic dimension of the Koran has always been part of its reception and still is; it is a multimedia text.

Certainly, as far as translation is concerned, the dogma that posits the Koran as un-reproducible has hindered all meaningful attempts to create an authoritative translation into another Islamic language, such that a common translation would result – something like the Luther translation of the Bible into German, for example.

As far as European translations go, some did gain recognition among Muslims, primarily the (partial) early 19th century translation by the German poet and translator Friedrich Rückert. This version was successful because it was able to convey the Koran poetically, while the translation by Rudi Paret and Hans Zirker recommended in academic circles today reduced the text to its discursive dimension – which only scares off the Western reader who has no interest in religious debates from late antiquity.

Neuwirth: The notion of "inlibration" is, of course, a Western idea that Muslims would find very strange. Sure, the Koran is the center point of Islam – after the death of the Prophet. But not the Koran as a text located between two book covers. The Koran is more often received as a spoken text rather than a written text, it is the qur'an in the sense of a recitation. I would refer instead to a space for the resonance of God's word.

Consider the Friday service: note the role of the Eucharist in the Christian service, in the Koran it is the prayer, which is primarily recitation, which has been recognized as the most intimate communication with God in Islam and even has been compared to the Eucharist, which I would accept.

I think you are right to criticize the fact that modern Western researchers do not consider the Koran to be part of late antiquity. But shouldn't our critique go further still? Wasn't the Koran one of the most fundamental holy scriptures also for large parts of Europe, one that greatly influenced our cultural development? I am thinking of the medieval Christian theologians' debates about Islam. Shouldn't the European constitution, if it makes recourse to the Judeo-Christian tradition, also either incorporate expressis verbis the influence of Islam, or formulate this issue neutrally, as is done in the preamble of our basic law, or even refrain completely from any reference to religion?

Neuwirth: My sentiments exactly. But I still think that the task of reintegrating the Koran into the theological literature of late antiquity should take priority. This seems to be the sticking point. As long as we continue to refer in an imprecise manner to "The Book of Mohammad," that is, if we deny the Koran the status of a holy scripture with all the attending implications, this epigonal character will make it impossible to understand Islam on equal terms.

I thus do not simply want to compare traditions, but would also try to find the amalgam that made these traditions into something new. The Koran certainly presents a case of cultural translation, but it is also a late result of the successful transmission of transcendentalism. All the issues you mentioned are very important.

You are currently working on large-scale projects related to the Koran for the Academy of Sciences Berlin-Brandenburg, the Institute for Advanced Study, a special research project at the Free University of Berlin, and Suhrkamp publishers. Can you tell us more about these projects?

Neuwirth: There are four projects.

BBAW: The Corpus coranicum is a double project consisting of 1) a documented edition of the Koran that integrates many of the oldest manuscripts and electronically evaluates them, and that also takes into account the scholarly literature on the different ways of reading the texts. The goal is to produce a well-documented, but not necessarily a critical edition; and 2) a historically-based, critical commentary that includes the extra-Koranic references for each sura, its place in daily life, and, of course, the current state of research.

The Free University's special research area on "The Aesthetic Experience of the Arabic Language": Here two different projects are concerned with the Koran: 1) A comparison between the Koran and the Psalms; 2) Koran calligraphy in context: Arabic and Hebrew script in historical and theological comparison.

The Institute for Advanced Study: "The Koran as a text of late antiquity, historical lectures on the Koran" (within the project "The Islamic Orient"). This is about, on the one hand, a historical lesson on the Koran based in extra-Koranic traditions, and on the other hand it is about the historical controversies stemming from the Koran. The project is being pursued with the collaboration of three young Muslim scholars.

The International Summer Academy of Istanbul 2007: Methodological approaches to the Bible and the Koran. Young theologians from the Islamic world and from Europe and the United States have been invited to participate in this project.

Angelika Neuwirth is a Professor at the Seminar for Semitic and Arabic Studies at the Free University of Berlin. Her research focuses on the Koran and Koranic exegesis, among other subjects.

Koran Studies
"What is the Koran?"
Christoph Luxenberg's book on the history of the origins of the Koran has found wide resonance internationally. But scholars of Islam are skeptical about the work. Michael Marx summarizes the results of a Berlin conference on the subject

Lily Zakiyah Munir
The Koran's Spirit of Gender Equality
Lily Zakiyah Munir, Head of the "Center for Pesantren and Democracy Studies", Indonesia, argues that it is not the Koran, but social convention of patriarchal cultures that women in Islamic countries are deprived of equal social status.

END_OF_DOCUMENT_TOKEN_TO_BE_REPLACED
Social media
and networks
Subscribe to our
newsletter