"We Face a Deficit of Democracy in Malaysia"

As leader of the opposition, Anwar Ibrahim is one of Malaysia's most influential politicians. In this interview with Rizki Nugraha he speaks about Muslim-Christian relations, the influence of religion on politics and the outlook for democracy in his country 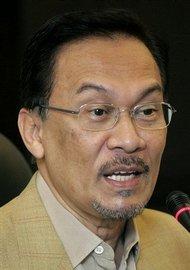 Anwar Ibrahim served as Malaysian Deputy Prime Minister from 1993 to 1998. He's now the leader of the Malaysian opposition

​​ Tension between religions in Malaysia has been rising since the court ruling that allows non-Muslims to use the word "Allah".

Anwar Ibrahim: Certain groups feel that it is in their interest to ratchet up tension because it serves their ulterior motives, but I would not say that great damage has been inflicted on Muslim-Christian relations. The Christian community's response to the arson attacks has been very positive and measured, and many Muslims have come out in support of the Christian community, for example, forming neighbourhood watch committees to protect Churches.

I have travelled far from the epicentre of the so-called "disturbances" and I find that people are generally unperturbed by the court ruling and are wary of being manipulated by the powers-that-be, whose steady decline in the popular ratings is the real reason for this artificially created crisis.

I'm happy to say that the broader population is not easily hoodwinked.

Why did the Malaysian government insist on appealing the court's decision, despite the fact that in doing so, it risks widening the gap between Muslims and Christians?

Ibrahim: The government appealed because it is hostage to the demands of an incendiary few. This group insists on using this issue to drive a wedge between different parts of the electorate – hoping to score a few points with fringe elements. They are not very concerned that the consequences of their actions could broaden divisions in society and lead to strife.

​​ Maznah Muhammad, the Singapore-based political expert, is concerned that the Malaysian government is increasingly mixing politics and religion. Do you think this concern is justified?

Ibrahim: The Federal Constitution of Malaysia clearly outlines the role of religion in Malaysian society. Islam is the religion of the state, but the freedom to practice other religions is guaranteed. We think it is wholly appropriate that religion be manifest in the political world in that the values that are greatly esteemed by religion – such as justice, mercy, love and compassion – inspire policies that lead to peace and prosperity.

However, the current government in Malaysia is notorious for mixing religion and politics to rather unscrupulous ends. Islam is being applied in ways that are deemed oppressive, contrary to the principles of the religion and in violation of some of our constitution's basic provisions. This is an abuse of power that must be checked.

The government's decision to appeal creates the impression that it is standing up for the interests of a certain group. Is there no future for secularism in Malaysia?

Ibrahim: The government's bias in all matters judicial is clear. Since the new prime minister came to power in April 2008, the government has not lost a single court case that has gone to the Court of Appeals. There is hardly any doubt that politically charged cases will eventually be decided in favour of or at the discretion of UMNO (the United Malays National Organization, Malaysia's largest political party – ed.) 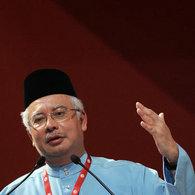 "The current government in Malaysia is notorious for mixing religion and politics to rather unscrupulous ends." - Malaysia's current Prime Minister, Najib Razak

​​ The issue is, therefore, not secularism, or the demise of it per se; the real dilemma we face in Malaysia is a deficit of democracy. A corrupt judiciary, a shackled media and the lack of personal freedoms means that the ruling party can run roughshod over the provisions of the constitution. Right now, religion is being used by the ruling party to garner support from certain fringe elements and in doing so, it is overstepping some of the bounds that define the relationship between the state and religion.

But the ruling party's willingness to overstep the bounds of the law to maintain its grip on power has been manifest in many forms including rampant corruption and incitement of racial sentiments. So our primary concern in the opposition coalition remains the safeguarding of the constitution in order to sow the seeds of democratic pluralism and greater accountability.

How did the minorities parties that are affiliated with the National Front (Barisan Nasional), such as the Malaysian Chinese Association and the Malaysian Indian Congress, react to Prime Minister Najib Razak's policy?

Ibrahim: The contradiction of their affiliation with the increasingly parochial and racist UMNO is glaring, but their options at this point are limited. How can they not moot their grievances given their dependence on government largesse. These parties represent the old school of Malaysian politics, which has more or less seen its heyday and is now in its twilight years. It would be unrealistic to expect a sea-change in their outlook, no matter what the prevailing circumstances are.

Anwar Ibrahim and his wife on the way to court on 3 February where he faces charges of sodomy. Critics claim the trial is part of a political conspiracy against the leader of the opposition

​​ Two political forces, the most influential parties in Malaysia, the Barisan Nasional and your party, the Pan-Malaysian Islamic Party, PAS, have been branded as conservative Islamic forces. So what is the difference between your party and the government party, for instance concerning the importance of promoting religious dialogue?

Ibrahim: I don't agree that PAS, which is a major player in the opposition coalition, is a conservative party. In the crisis over the "Allah" issue, they made their stance very clear, namely that Christians and Jews can use the term, upholding what is considered a mainstream position throughout the Muslim world. Therefore, to lump them together with UMNO as exponents of conservative Islam is to badly misperceive them. Both PAS and the rest of the opposition coalition are in favour of dialogue among all who want to talk about preserving and promoting religious harmony in our diverse population.

The ethnic groups in Malaysia are still fragmented, especially politically. They tend to defend the political interests of each group. Sometimes they also try to outdo or eliminate the interest of other groups. Do you see this phenomenon as a challenge or even an opportunity for democracy in Malaysia?

Ibrahim: It is true that the various ethnic communities in Malaysia continue to perceive their interests in a narrow and parochial manner. That is because the government, which has been in power without interruption for 52 years, has promoted and fostered this sort of mind-set as a divide-and-conquer strategy. As a consequence, the various ethnic groups often react to situations by falling into a zealous ethnic turf protection and demarcation mind-set that in time creates ethnic ghettoes.

Pakatan Rakyat, the opposition coalition I help to lead, vigorously rejects this approach. Through its recent collectively endorsed Common Policy Framework it has accelerated the process of dissolving these hardened strata and set in motion the transformation of Malaysian political society so that it is no longer in thrall to structures that engender ethnic hegemony, financial and judicial corruption, and overall decay.

So far, the people have responded positively to what we have to offer. We have been able to secure victories in elections in five of Malaysia's key states and have become contenders for power at federal level in just a few years. I think the future is bright for the new agenda we are offering the people.

Islam and Politics in Malaysia
Islamist Genie Is out of the Bottle
In Malaysia's current political climate, it is no longer possible to distinguish Islamic radicals from Islamic moderates. Despite official boasting about the country's diverse population and commitment to pluralism, Islam and the government have essentially merged, writes Maznah Mohamad

END_OF_DOCUMENT_TOKEN_TO_BE_REPLACED
Social media
and networks
Subscribe to our
newsletter