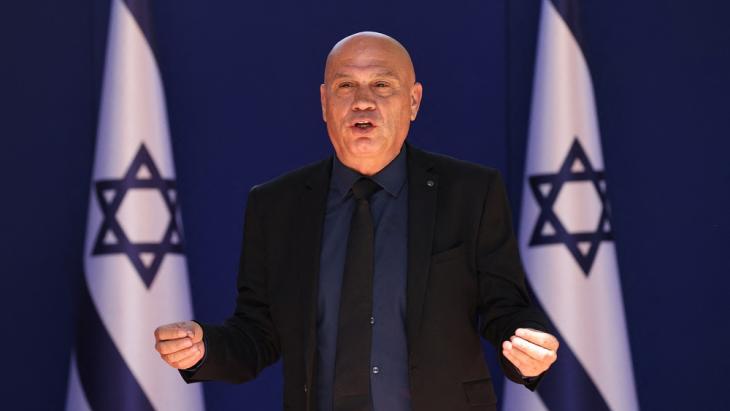 Interview with Arab Israeli MP Essawi Frej
"Israel is my country, the Palestinians are my people"

Essawi Frej, the first ever minister of Arab origin in an Israeli government, explains in interview with Markus Bickel what can be achieved in a coalition of opposites

The rotating government of alternating prime ministers Naftali Bennett and Yair Lapid (the latter is scheduled to lead the cabinet from August 2023) is unprecedented in Israel's history as a coalition of eight parties – from left-wing liberal to right-wing nationalist, Zionist to Arab. It has a mere one-vote majority in the Knesset and was initially united solely by the will to finally replace long-term Prime Minister Benjamin Netanyahu of the Likud party.

Elected in mid-June, this executive has so far withstood the pressure of its opponents and avoided any major tests of strength. Bennett's mantra – "we must overcome the politics of hatred and division within the nation" – is still proving an acceptable foundation for all 27 ministers to engage in the political process. One of them, Essawi Frej of the Meretz Party, head of the department for regional co-operation, is hoping at some stage to resume negotiations with the Palestinian Authority. Trade and economic aid for the West Bank could be a way of gaining the necessary acceptance for such a proposal in Ramallah.

Mr. Frej, are you proud to be the first Arab minister in Israel's history?

Essawi Frej: You can ask me that question at the end of my term. I wish to be judged on my achievements, and it is too early for that. After all, we are just over a hundred days into Prime Minister Bennett's new government. What is at stake is the goal of making progress for Israel's Palestinian residents – and opening doors for the next generation. If this is achieved, maybe we will have something to be proud of one day.

In the 1990s, Arab parties secured Yitzhak Rabin a majority in the Knesset without being part of his cabinet. Today, the Islamist Ra'am party is openly in coalition with a right-wing head of government like Bennett, and you are part of his government. What has changed in the last thirty years?

Frej: Israel is my country; the Palestinians are my people. But the land comes first – a view, by the way, shared by ninety percent of Arabs in Israel. You cannot be part of this society and constantly attack it with stones and verbal abuse. And you cannot be part of this state and say that you hate it. It is not possible to hate something, while wanting to belong to it at the same time. I know that Arab Israelis are not equal to their Jewish fellow citizens. That's why I will continue to do everything I can to change the situation. 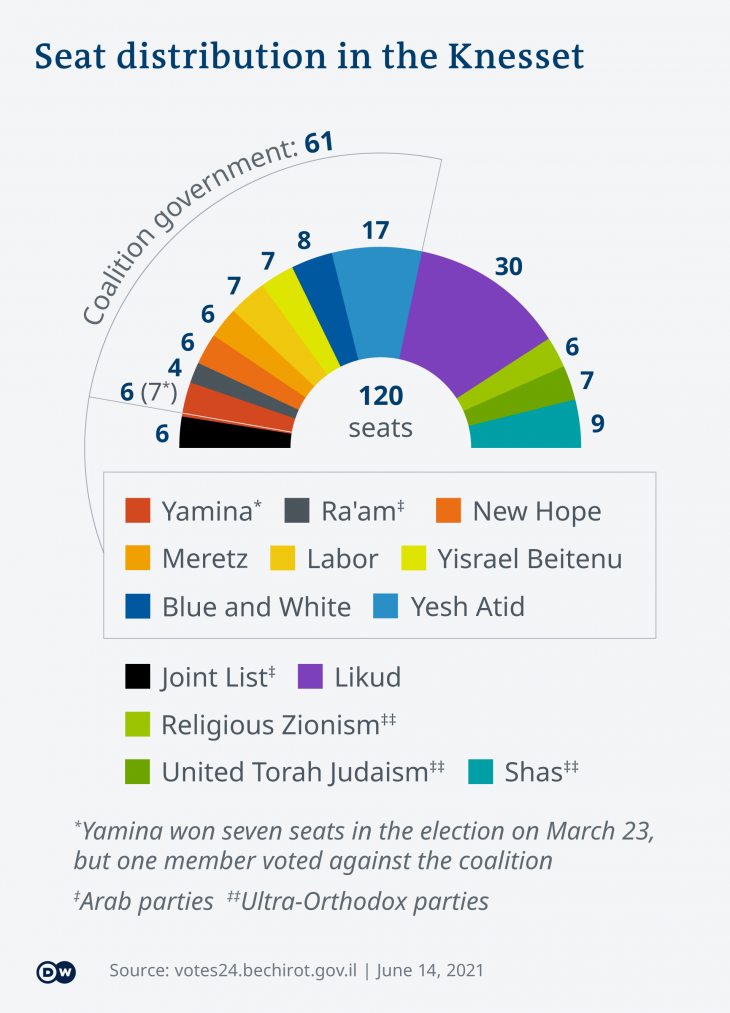 Is that possible with this government?

Frej: I will not give up my fight for equality. You see, every one of the nine million Israelis has two identities – one national and one civil. My neighbour's nationality may be Jewish, and mine is Arab. That's where we differ, but our civil identity is the same: it's Israeli, and it keeps us together, even though people have repeatedly tried to divide us by claiming otherwise over the past seventy years. That is what I believe in, and that is what I stand for, as a member of the Knesset and as a minister.

Frej: We have to proceed with caution if we are to build trust between the two sides. Since 2008, there have been no meetings at the highest level; only military officials have spoken directly to each other on pressing issues. That has changed under the new government: Defence Minister Benny Gantz met Mahmoud Abbas, President of the Palestinian Authority, in August. I have also met my counterpart from Ramallah. And there has also been a meeting between the health ministers. That would seem to imply change.

You don't really believe there can be a lasting solution to the conflict without the resumption of political negotiations ...

Frej: ... you have to distinguish between my personal opinion, my party's position and government policy. My opinion is clear: we are committed to a two-state solution. It is also the view held by the Meretz Party, a stance that is unlikely to change. At the same time, we are part of a government that does not want to move on implementation, because the coalition agreement stipulates that controversial issues such as the ongoing construction of settlements and a resumption of the political process should not be addressed. But that is not going to stop us from talking about it. Peace negotiations are part of our agenda.

Should there be negotiations with Hamas as well?

Frej: I am convinced we need to include Hamas. Again, however, the same thing applies: if we were to try to speed up the political process now, there would soon be no government. 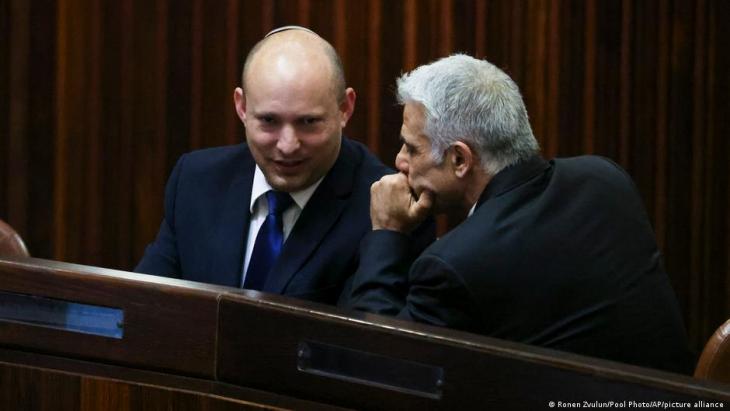 End of the Netanyahu era: for the first time in twelve years, Israel has a government without Benjamin Netanyahu at the helm. The new eight-party coalition has a razor-thin majority in parliament. Despite ideological rifts, the broad coalition under Prime Minister Naftali Bennett agreed on a budget on 4 November 2021. A new election has thus been averted for the time being. Naftali Bennett and Yair Lapid intend to occupy the position of prime minister on a rotating basis

How then do you intend to achieve improvements for the Palestinian side during your time in office?

Frej: Before I became a politician, I worked in the private sector. I know what people need is to feel their situation is improving economically. Since our government has been in office, we have issued 15,000 new work permits for Palestinians working in Israel. Nevertheless, there are still 50,000 workers who are without official papers – and who have always received their wages in cash. This must change. If we can get Israeli employers to transfer this money to Palestinian banks in future, it would also boost the economic cycle there. I am hopeful we can achieve this by the end of the year.

Will such small steps make a difference? The Palestinian economy is on its knees, not only in Gaza, but also in the West Bank, where there is little reason for hope.

Frej: This is exactly why we are working to facilitate the transport of goods across the Green Line. Currently, goods are only allowed to enter and leave through four of the main checkpoints between the West Bank and Israel. Our goal is to open at least six to facilitate trade. We also promised a loan of 500 million shekels to the Palestinian Authority in August. This money is urgently needed, but so is donor support to give hope to the people. And quickly, because the situation is extremely precarious.

Again the question: are such steps really enough?

Frej: As I said, the Bennett administration is committed to bringing about incremental change at an economic and civil level. It's about creating a basis for negotiations, but for that you need solid ground, and currently that doesn't exist.

Is a two-state solution realistic at all, or is there a need for other models, such as a federation with equal rights for all citizens – regardless of whether they live in the West Bank, Israel or the Gaza Strip?

Frej: As long as all parties involved come together around one table, any and all of the options can be addressed. But what is needed in the end is an agreement. If we are strong, it should be possible, based on our common humanity, to reach an agreement.

What about the Abraham Accords? One year after Israel established diplomatic relations with the United Arab Emirates and the State of Bahrain, the euphoria appears to have faded.

Frej: There has been an exchange of ambassadors with both the Emirates and Bahrain, and we hope Morocco will soon open its own consulate in Israel. Together we are thinking about how investments can be strengthened and peace passed on to the people. Moreover, relations with Egypt and Jordan, which had been somewhat strained lately, have also improved since the new government took office.

Do you expect other Arab countries to conclude normalisation agreements with Israel soon?

Frej: There is soon to be a joint meeting in the United Arab Emirates involving ministers from all six of the Arab states that are pursuing diplomatic relations with Israel. Far away from the cameras, to get to know each other personally. That is a good step and I am optimistic that it will be the first of many.

Essawi Frej, 57, has been minister for regional cooperation under Prime Minister Naftali Bennett since June. In 2013, he entered the Knesset for the first time as an MP for the left-wing liberal Meretz party. The politician, who comes from the Israeli-Arab town of Kufr Kasm, has a degree in economics.

With reported hostilities against Israeli journalists and the flag of the Palestinian territories flying on the streets and in the stadiums, it is clear the World Cup in Qatar is ... END_OF_DOCUMENT_TOKEN_TO_BE_REPLACED

When is it and when is it not acceptable to display a political banner at the World Cup in Qatar? The answer seems to depend largely on the political message, with fans ... END_OF_DOCUMENT_TOKEN_TO_BE_REPLACED

A leading light of Israeli theatre, Ofir Henig has directed the Israel Festival and is the only female director to have been awarded the Israel Theatre Prize. These days, however ... END_OF_DOCUMENT_TOKEN_TO_BE_REPLACED

With the current leadership of Iran quick to lay the blame for the Iran protests on Israel, the chances of harmonious relations between the two countries still seems remote. Yet, ... END_OF_DOCUMENT_TOKEN_TO_BE_REPLACED

Daniel Barenboim is not only a world-famous pianist and conductor. He has also worked tirelessly to foster understanding and reconciliation between Palestinians and Israelis. By ... END_OF_DOCUMENT_TOKEN_TO_BE_REPLACED

After a two-year hiatus, the Arab League re-convened at the beginning of November in Algiers against a backdrop of uncertainty and discord. By Pierre Boussel END_OF_DOCUMENT_TOKEN_TO_BE_REPLACED
Author:
Markus Bickel
Date:
Mail:
Send via mail

END_OF_DOCUMENT_TOKEN_TO_BE_REPLACED
Social media
and networks
Subscribe to our
newsletter