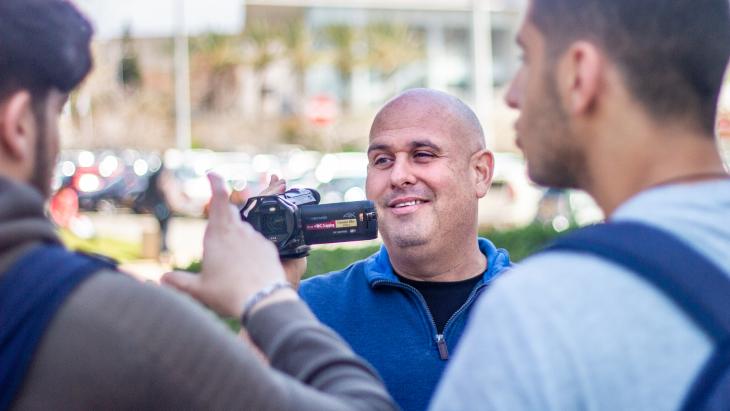 Anyone, anywhere can send you a question (askisraelis@gmail.com or askpalestinians@gmail.com). Do you remember the first one you filmed?

Corey Gil-Shuster: There was a group of thirty or so people and they were so sure about everything. Someone said something about a one-state-solution, and I thought great, how can I turn that into a question? So first I asked people in Tel Aviv, on the street where I live: the greengrocer and other locals. I had no experience with editing, but once I had put the interviews together in digital form I realised how powerful this could be when making sense of a conflict situation.

So did you go straight to the West Bank or East Jerusalem to put the same question to Palestinians?

Gil-Shuster: It took me a few months to do it. I had only been there as a tourist before. So I asked a few Palestinians whether I could come to their village to try out my project. The first videos I filmed there were very poorly translated; the work was done by friends who just wanted to help out. So I hired a professional translator.

Some of the questions are quite provocative. Do you explain yourself and the project first? How do you avoid merely getting a lot of angry reactions?

Gil-Shuster: I don’t like to provide too much information. So I just tell them that I have a project on YouTube that aims to answer people's questions from outside Israel and would they be prepared to answer a question on camera? It‘s really important that they understand it will be made public.

Israelis are less bothered about being filmed and more concerned about the embarrassment factor – how do they look, is their hair okay, that kind of thing. Palestinians worry about whether going on the record in public could be dangerous, so I‘m very careful of their safety. That‘s really all I do.

"Some questions are really awful"

It sounds easy. Is there no mistrust?

Gil-Shuster: I think they assume I will ask them a trivial question; they don't expect politics. Sometimes I see this look in their eyes when I ask them a question. And, honestly, some of the questions I get sent are really awful.

Gil-Shuster: The worst one I had to put to Israeli Jews was: "Why do you treat Palestinians the way the Nazis treated the Jews?" It was really hurtful for me to ask that, but I did, saying this is not my question, but here it is. Sometimes interviewees look shocked, but I think it is important for them to understand that there are people outside who have questions, even if they don’t think the questions are legitimate. Sometimes people will say I don’t want to answer that question, which is fair too.

With reported hostilities against Israeli journalists and the flag of the Palestinian territories flying on the streets and in the stadiums, it is clear the World Cup in Qatar is ... END_OF_DOCUMENT_TOKEN_TO_BE_REPLACED

When is it and when is it not acceptable to display a political banner at the World Cup in Qatar? The answer seems to depend largely on the political message, with fans ... END_OF_DOCUMENT_TOKEN_TO_BE_REPLACED

A leading light of Israeli theatre, Ofir Henig has directed the Israel Festival and is the only female director to have been awarded the Israel Theatre Prize. These days, however ... END_OF_DOCUMENT_TOKEN_TO_BE_REPLACED

With the current leadership of Iran quick to lay the blame for the Iran protests on Israel, the chances of harmonious relations between the two countries still seems remote. Yet, ... END_OF_DOCUMENT_TOKEN_TO_BE_REPLACED

Daniel Barenboim is not only a world-famous pianist and conductor. He has also worked tirelessly to foster understanding and reconciliation between Palestinians and Israelis. By ... END_OF_DOCUMENT_TOKEN_TO_BE_REPLACED

After a two-year hiatus, the Arab League re-convened at the beginning of November in Algiers against a backdrop of uncertainty and discord. By Pierre Boussel END_OF_DOCUMENT_TOKEN_TO_BE_REPLACED
Author:
Inge Günther
Date:
Mail:
Send via mail

END_OF_DOCUMENT_TOKEN_TO_BE_REPLACED
Social media
and networks
Subscribe to our
newsletter