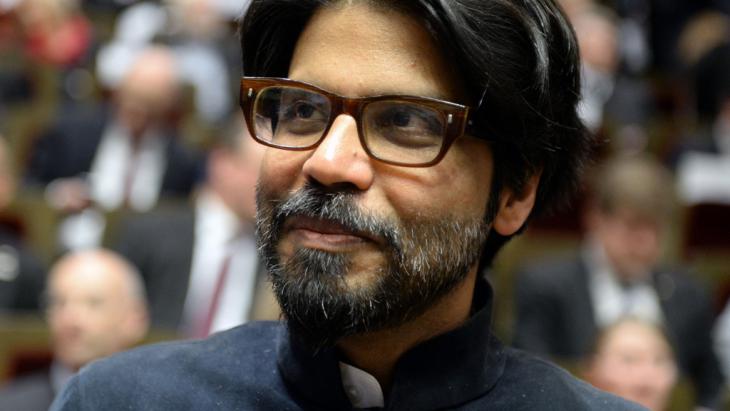 Societies around the world are in turmoil, with religious and social groups pitted against each other in many countries. Examples include the Arab Spring, social revolt against oppressive regimes, the rise of IS, the call from some in Europe for Islam to reform, and the emergence of right-wing movements such as Pegida. Julis Koch spoke to Indian author and essayist Pankaj Mishra about the root causes of this tension and lack of understanding

Mr Mishra, you have written about the processes of Western colonisation, imperialism and how the ruling elites of India, Pakistan and Tibet have partially appropriated elements of modern Western values and ideals, the most obvious of which is the establishment of nation-states. What are the consequences of these transformations? Have values in countries such as Pakistan, India and Tibet changed as a result?

Pankaj Mishra: I think that the dominant value now is one of personal profit and private self-interest. This used to be a value that was only upheld in a small part of the world. Now it is a universal phenomenon that dominates all other social, religious and political traditions that have existed in these countries.

We are all now supposed to be entrepreneurs. We are supposed to put ourselves out there – whether it be in business or on social media, like Twitter and Facebook; we have to brand ourselves; we have to promote ourselves. This is the primary value. This is essentially the internalisation of this capitalist ethic that has put pressure on a whole lot of solidarities: the solidarity of the family, the community, cultures and the working classes in many places, like India and China today.

So we have moved away from ideas of collective welfare, which is what our countries were originally founded on: this promise of collective emancipation, a collective fight against social practices and ills, to treat the position of women, of lower castes, of disadvantaged minorities. We have now set aside those collective projects and now it's basically individualism that is supposed to deliver and liberate all of us.

This must create quite a rupture in rural societies. What are the consequences of this development for the poor? They can neither simply hop on the train of individual entrepreneurship, nor do they want to abandon their social values and religious beliefs, which mean a lot to them. At the same time, their livelihoods must be disrupted by this tremendous transformation. 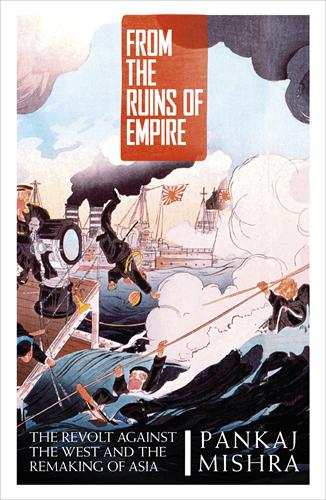 In his book "From the Ruins of Empires", Mishra recounts the events of colonisation and post-colonisation from a novel historical perspective. He describes the pathways and observations of Asian intellectuals and revolutionaries, many of whom are relatively unknown in the West: Liang Qichao, Tagore, Jamal al-din al-Afghani, and Sun Yatsen

Mishra: This is a very important point that very few people in Europe or America understand, partly because their own experience of such a situation happened 150 years ago, when they made the transition from a rural and community-based life to the big, impersonal city, a life where individualism was the key value.

Hundreds of millions of people are undergoing this transition in India and Pakistan today. For many of them, there is still security in family life. At the same time, many young people go for this promise of individual freedom. There is a conservative backlash to all of this, sometimes from their own parents, their own fathers. This backlash goes in all kinds of directions: from individuals being assaulted and killed to fundamentalist movements.

These are really very complex processes, but what we're looking at is this endless transition from social solidarities of the past to this modern world of impersonal relationships, of individual freedom, which for many people always remains something remote, something they will never reach. Often out of frustration, they turn fundamentalist. Many of the profiles of people who join radical movements show people who are in limbo, disaffected, not able to connect to anyone, to any community of any kind. They join these organisations simply to experience a sense of solidarity, a sense of community again.

Mishra: It does to a great extent, because having lost a vital link to Christianity, which was really in many ways a kind of invisible basis of European unity down through centuries, I think the whole experience of what it is to be a religious person – to have one's horizons defined by a transcendental presence, by a being who is not visible, who is constantly watching over you – very few people who are secularised now, who have lost faith, who have lost religious faith, who are no longer Christians, to whom Christianity is only a name, have great difficulty understanding that for many people in the world today – not just Muslims – morality, a way of being in the world, can really only come from religion and from religious faith.

I think that is creating a big problem of understanding in large parts of Europe because Europe has lost that experience that very few people are religious in the old way in Europe and that secularisation has really created a void of understanding. 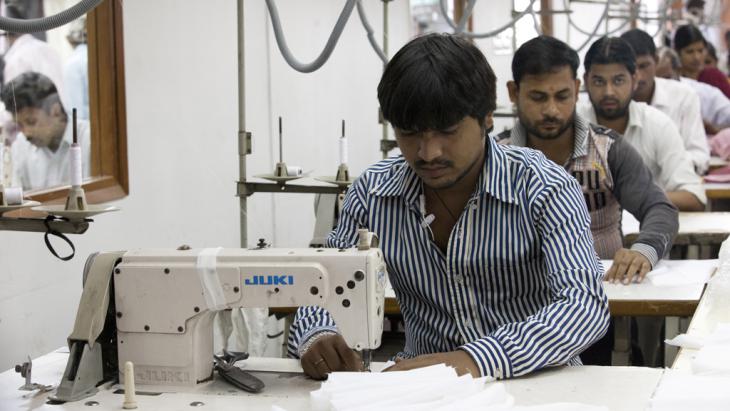 Branding ourselves: the "capitalist ethic" is what drives the globalised societies in our world today. According to Pankaj Mishra, it "has put pressure on a whole lot of solidarities: the solidarity of the family, the community, cultures and the working classes in many places, like India and China today". Pictured here: workers in an Indian textile factory

Contemporary debate over Europe's identity increasingly refers to the continent's Christian heritage. Islam is understood by some to be intrinsically non-European. Yet history has taught us that Islam and Judaism have very much shaped European history. Why do some politicians and influential personalities want to emphasise that Islam and "European culture" are fundamentally distinct from one another? What effect does such a pronounced "cultural segregation" have on European societies?

Mishra: I think it is really primarily a symptom of an intellectual failure; a failure to understand Europe's own past, how Europe dealt with the arrival of secular modernity, urbanisation and industrialisation. These were massive processes that uprooted many millions of people, exposing them to new, intolerable conditions and one economic crisis after another. This whole experience of Europe is now denied in the rush to define or blame Islam or religion for problems that have much to do with a failed modernisation.

Some want to attribute backwardness and inferiority to 1.5 billion people and a religion, insisting that they are superior to them. What they are actually denying is that they have achieved their superiority through a very complicated, tormented and violent process. So I think there is a very uneasy relationship with this past. Eventually, you end up emphasising religion and doing this culture talk all the time. It is so difficult to reckon with this complicated political, economic, ideological past of Europe which we see being played out in different other parts of the world.

If there was more of this intellectual effort to reflect on Europe's rough past on its way to modernity, would this process depend on "the other" to forgive? Or would it be more of a self-promising corrective in the sense of "we are not going to do this again"?

Mishra: I do not think forgiveness is something that can be practiced on a mass scale. What is important is understanding, not forgiveness. Understanding is a form of forgiveness. I think that moving away from the urge to demonise people by referencing their religious beliefs and backgrounds and also reflecting on Europe's past and very violent history would be a big step forward in itself. It should not be confused with feeling guilty or ashamed. It should simply be a way to understand where we are today, wherever you are, whether in the West or in the East.

It should be part of a recognition that our conceptual vocabulary has been very limited, because of these binaries, because of "Islam vs. the West". We are still working with outdated assumptions and outdated ideological oppositions.  This is why we perhaps need to be more Eurocentric than not – Eurocentric in the sense of being more self-critical and aware of Europe's past, so as not to dress up Europe's history as something everyone else should follow.

I am thinking here of the demand that Muslims should reform, that Islam should go through a whole process of reformation. This is an assumption based upon a complete fairytale. It is denying that the reformation was an incredibly traumatic and bloody process for Europe. We should not wish this process on any other people. Yet this demand is made again and again, because the teleology behind this is that the reformation made us a better people. Therefore, this people should also undergo a reformation and eventually give up its faith.  But nobody is going give up their faith just because Europeans demand it. For this reason, we are at an impasse.

Home
Print
Newsletter
More on this topic
Interview with Maha El-Kaisy-Friemuth: "We urgently need reform within Islam"Islam and the modern age: Moving beyond dogmatic doctrineMuslims in liberal democracies: Why the West fears IslamStefan Weidner's book on Islam and the West: The end of imperialismQantara dossier: India
Related Topics
European Islam, Islam and the West, Islam in Europe, Secularism in the Islamic world
All Topics

Philosopher Juergen Habermas was due to be awarded a major Arab prize in Abu Dhabi, but has turned it down following criticism. This decision torpedoes Arab efforts at a ... END_OF_DOCUMENT_TOKEN_TO_BE_REPLACED

Although a unity government was formed in Libya in March 2021, tensions and possible crises between the political actors are already emerging. What problems does the country face ... END_OF_DOCUMENT_TOKEN_TO_BE_REPLACED

Among Muslims, the image of women as "cossetted hijab-wearing princesses" is frequently invoked. But Muslim women have long wanted to be more. In her essay, Karoline Roscher- ... END_OF_DOCUMENT_TOKEN_TO_BE_REPLACED

Even in times of war and pandemic, refugees are still being deported to Afghanistan. Several deportation flights have taken place in recent weeks alone. Since those affected often ... END_OF_DOCUMENT_TOKEN_TO_BE_REPLACED

Surging coronavirus cases in many parts of the world have overshadowed the start of this year's Muslim holy month of Ramadan, with festivities once again curtailed by contagion ... END_OF_DOCUMENT_TOKEN_TO_BE_REPLACED

German Middle East analyst Guido Steinberg and television journalist Ulrich Tilgner have both published new books on the conflicts in the Middle East. Their analyses and their ... END_OF_DOCUMENT_TOKEN_TO_BE_REPLACED
Author:
Julis Koch
Date:
Mail:
Send via mail

END_OF_DOCUMENT_TOKEN_TO_BE_REPLACED
Social media
and networks
Subscribe to our
newsletter