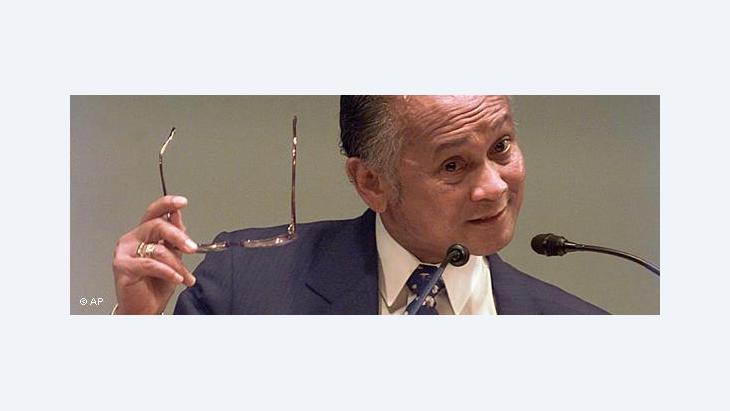 ''Foreign Aid Helped Us Get on Our Own Feet''

As president of Indonesia, Bacharuddin Jusuf Habibie facilitated the democratisation of his country after May 1998. His autocratic predecessor Suharto had resigned in view of a huge protest movement. In an interview, Habibie recently shared his experiences with Hans Dembowski. Some of his insights may prove useful in Arab countries like Egypt

What is your advice to Egyptians?

Habibie: I tell them not to opt for the fast revolutionary road. The important decisions must be taken by the parliament, not the street. Accordingly, more time is essential. There are new, young forces that have yet to organise properly. What Egypt needs now is a leader for the transition. It must be obvious that this person is not clinging to power in the long run, but preparing the ground for a new order.

Were you aware of being Indonesia's transitional leader 13 years ago?

Habibie: One has to be realistic. I had been a member of the cabinet for two decades. The protests didn't target me personally, but Suharto, the president whom I had served as minister and vice president, was forced to step down. According to the constitution, I became the next president. I immediately introduced the freedoms of press and assembly. From that day on, everybody could say and publish what they wanted. Demonstrations became legal too, so long as they were peaceful and did not turn violent.

But weren't you under pressure because the protest movement was demanding fast change?

Habibie: Yes, there was pressure. On my second day in office, I met with a group of well respected citizens who were supporting the opposition. The most prominent of these seven gentlemen was Amien Rais, who later started the National Mandate Party. 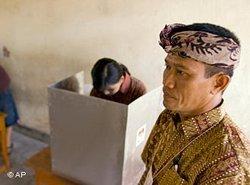 "Nature does not make jumps": Immediately after Suharto's downfall, Habibie prevented hasty elections so as to give the opposition time to get organised. Pictured: presidential election in Indonesia

​​This delegation told me they wanted elections soon to get a democratic government. But I disagreed. I told them that I would win early elections because I was the only one whose party was present all over the country. I understood that the transition had to be managed. We needed a society-wide consensus on what was to happen. I asked friends like Jimmy Carter, the former US president, to come to Indonesia and discuss with the people so they would understand what would be feasible and sensible.

Socialist East Germany collapsed almost ten years before Suharto's resignation. In that peaceful revolution, which ultimately resulted in German reunification, pluralistic "round tables" had played an important role. They were geared to finding consensus. Did those events shape your understanding of what was going on in your country?

Habibie: Of course I was aware of what had happened in Germany. I studied in Aachen, Germany is my intellectual home. But I didn't discuss that background much. Some people were already saying about me: "He is German." That was nonsense, of course, I am Indonesian and I always understood that Indonesian challenges require Indonesian solutions.

After the fall of the Berlin Wall, German development agencies – led by the Federal Ministry for Economic Cooperation and Development – began to emphasise issues like democracy and human rights. Did that have an impact on your country?

Habibie: No, we did not need lectures of that kind. Democracy and human rights are enshrined in our constitution, which is older than the United Nations. We once were a colonised people, we know what oppression is. The principles of freedom are universal, but how they are enforced depends on a country's culture and history. I am an engineer; I know that the laws of nature cannot be changed. But one can make intelligent use of them. Democracy and human rights are like that too. The basics are beyond dispute, and the real challenge is to make ideas become reality.

Did German partners help you do so?

Habibie: Yes, they did, and that was very good. At the time, we were struggling with the Asian financial crisis. 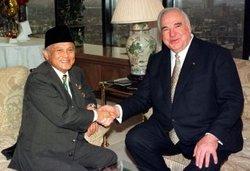 Germany provided development aid and advice to Indonesia after the Suharto era ended. Pictured: Helmut Kohl and Bacharuddin Jusuf Habibie at a conference in London

​​So I gave Helmut Kohl, who was Germany's chancellor at the time, a phone call and told him I needed someone to support our central bank. His answer was: "I'll send you Schlesinger." A little later, Helmut Schlesinger, the former head of your central bank, the Bundesbank, came to Jakarta and began advising our central bank. At most, he was responsible for five percent of the decisions. The lion's share of the work was done by Indonesians; we have excellent experts ourselves. But Schlesinger's presence made sure the country stayed on the right track.

Was he the only one from Germany to help you?

Habibie: No, not at all. When I needed advice on competition policy, I called Kohl again. Soon after, Wolfgang Kartte, the former head of your Federal Cartel Office, came to Jakarta. And when I needed support for the reorganisation of the financial sector – we merged four banks that had run into trouble into a single entity – I rang Josef Ackermann, who is now the chief executive officer of Deutsche Bank, your country's most important private-sector bank. Back then he was a young man who was working in the London branch of Deutsche Bank, supervised by my friend Ulrich Cartellieri. When I called him, it was Friday afternoon in London, and Monday morning he was in Jakarta. This kind of support was fast, reliable and most valuable. These people helped us avoid mistakes. They were really helpful – unlike the International Monetary Fund, which disappointed me.

Habibie: The IMF's engagement was like a double-edged sword. The IMF is supposed to take care of macroeconomic matters, but it diverged into microeconomics too. The Fund destroyed Indonesia's state-owned strategic industry. Consider aviation, for instance. We were close to manufacturing a competitive airplane, but then the crisis broke and the IMF stated that, unless this programme was discontinued, there would be no money. We were not even allowed to continue by private-sector means. The company was a state-owned corporation with several thousand staff. I wanted to go public and sell shares on the stock market, but I was not allowed to do so. In the recent global financial crisis, the IMF did not deal with rich nations in the same strict manner. This is a case of double standards.

Even before the transition to democracy, Germany had granted development aid to Indonesia. How do you rate that in retrospect?

Habibie: German aid was very good. Among other things, it contributed to building roads and improving our health care and education systems in the long run.

Indeed, Indonesians made sustainable use of aid. Many other countries did not manage to do so.

Habibie: I cannot tell you why something did not work somewhere else. For us in Indonesia, aid was always help to get on our own feet. And that is how it is supposed to be.

Bacharuddin Jusuf Habibie served as Indonesian president from May 1998 to October 1999. He studied in Aachen, Germany, and has a PhD in aviation and space technology. Under authoritarian President Suharto, he was minister for research and technology for 20 years and, in early 1998, became vice president. Today, he chairs the Habibie Centre's Board of Trustees. This Jakarta-based think tank focuses on issues of democracy, human rights, science and environment-friendly technology.

Home
Print
Newsletter
More on this topic
Religion and Politics: Much Remains to be DoneDemocratisation in Egypt and Indonesia: "Do Not Repeat Our Mistakes!"
Related Topics
All Topics
Date:
Mail:
Send via mail