The Secular Elements of the Islamic Republic

The Iranian revolution sought to establish an Islamic state. Officially, it got one. Unofficially, however, the process did not lead to the Islamicization of society, but to a transformation of Islam. This, in any case, is the theory held by the Iranian sociologist Behrooz Ghamari-Tabrizi. Mona Sarkis spoke to him 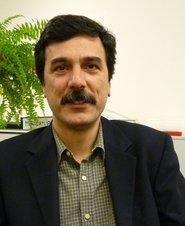 ​​ Professor Ghamari-Tabrizi, you say that the West doesn't pay enough attention to one significant development in Iran, namely the pragmatic political dealings of Islam. What do you mean by that?

Behrooz Ghamari-Tabrizi: First of all, let me give you a few examples. According to conventional Islamic law, abortion is "haram" and only permitted if the mother's life is in danger. In reality, however, some 90,000 Iranian women abort illegally every year.

The state was forced to react by changing its laws, which it did in 2007. Since then, abortions have not only been permitted when the mother's life is in danger, but also when the foetus demonstrates malformations, and the parents can prove that they cannot meet the needs of the child financially.

All this was inconsistent with traditional Islamic jurisprudence. However, the grand ayatollahs and the Supreme Leader, Ali Khamenei, solved the problem by stating that, according to Islam, the soul only enters the foetus on the tenth day of the fifth month and that prior to this, the foetus is, therefore, just "a piece of meat".

Incidentally, Grand Ayatollah Yusuf Saanei declared as far back as the year 2000 that Islam is a religion of "compassion", and that God does not require his laws to be exercised in the event of serious problems. 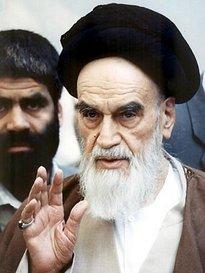 "Enormeous confusion": in the early days of the Islamic Republic the higher echelons of the clerical establishment had difficulties balancing political and religious priorities

​​ Another example is the state's plan to minimize the country's rate of population growth, which stood at 3.6 percent in the mid 1980s. Due to the promotion of traditional Islamic law, which rejects contraception and family planning, Iran had one of the world's fastest growing populations.

The Islamic Republic, however, recognized that it did not have the resources to provide for these upcoming generations and launched a radical counter-programme in the 1990s. In addition to the free distribution of contraceptive pills and condoms, it introduced in 1996 a mandatory "sexuality education license" for couples intending to marry.

It provided information on contraception and recommended a maximum of two children. It also established 200,000 "health houses" all over the country in order to instruct young couples in family planning and made sure that the couples lived in the villages where the training took place so that they could later pass on their knowledge to their community.

Within ten years, the population growth rate had been reduced to 1.2 percent. This is unprecedented worldwide. And do you know where the plan was most effective? In those villages where there was a mosque. Because the government had to enforce the population plan, the higher echelons of the clerical establishment told the mullahs to promote what is, in fact, un-Islamic family planning. This was pure pragmatism.

So this massive social transformation process was only possible because of the link between politics and religion? 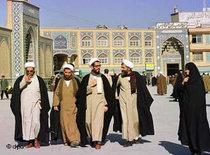 "Shiism never closed the 'gates of ijtihad'": Shiite clerics in Ghom, the largest center for Shi'a scholarship in the world

​​ Ghamari-Tabrizi: The Islamic Revolution put an end to the secular system and by doing so, automatically put the dogma of Islam into a position where it was constantly contested because Islam had to stay abreast of political reality. As a result, we are seeing less an Islamicization of society and more a transformation of Islam. This was not an intentional consequence of the Islamic revolution, but I think it is its most profound consequence.

This undoubtedly led to enormous fighting in clerical and political circles.

Ghamari-Tabrizi: The confusion was and is enormous. I remember one very funny incident. When Ruhollah Khomeini set up the Expediency Discernment Council of the System in 1988 so that it would mediate between the Guardian Council, which focuses on religion, and the parliament, Ayatollah Emami Kashani, who was both a member of the Guardian Council and the Expediency Discernment Council, got quite frustrated and said to Khomeini:

This is a very revolutionary thing for the Supreme Leader of the Revolution to say. It almost sounds like a return to secularism.

Ghamari-Tabrizi: Khomeini set a process in motion that is extremely hard to contain, and as early as 1981, Ayatollah Bayat made use of the term "secularism" when he predicted to Khomeini that the politicization of Islam would lead to a "secular" view.

Yet another example demonstrates how far the Supreme Leader went: when in 1988 a labour law was passed that was good for employees but impeded investments, Khomeini was criticized on the basis that Islam respects private property and that he had, consequently, no right to impede investments.

What impact did this move towards secularism have on society? Would it be correct to say that there was a certain diminution of religiousness?

Ghamari-Tabrizi: It depends on how you define religiousness. The West focuses on the capital Tehran and on young men with gelled hair and women wearing tons of make-up. Even so, many of them say their daily prayers. Shiite Islam is above all an Iranian Islam and completely different from Arab-Sunni Islam. For example, everybody in the Islamic world marks his religious holidays as the major ones, except Iranians.

Iran's New Year falls in the spring and dates back to a farming culture that prevailed around the time of the Achaemenid (559–330 BC) when spring was of special economic relevance. So pre-Islamic pagan rituals still play a central role. To the West as well as to Sunnis, this seems contradictory, but not to Iranians.

Another difference between Sunnism and Shiism is that the latter emphasises "ijtihad", the ongoing reinterpretation of the Koran and the Sunna. Is this another reason why we will not see this pragmatic approach to Islam in Sunni Arab countries?

Ghamari-Tabrizi: Shiism never closed the "gates of ijtihad" and it has a clerical hierarchy that gives much more weight to the fatwas of Shiite clerics than those of Sunnis. But the decisive factor is the mixing of politics and religion in Iran. This puts Islam in a continuous frame of reference for social policy decisions. And this actually leads to the great irony that turns everything on its head.

In Arab countries that are formally secular, there is ultimately far less room for an innovative, creative Islamic jurisprudence than in the self-declared Islamic Republic of Iran, which has, since 1979, no matter what government was in place, demonstrated a tremendously vibrant hermeneutic interpretation of Islam.

Behrooz Ghamari-Tabrizi is a professor of history and sociology at the University of Illinois at Urbana-Champaign and the author of the book Islam and Dissent in Post-revolutionary Iran.

On the Death of Hossein Ali Montazeri
From Revolutionary to Reformer
Grand Ayatollah Montazeri was regarded as the spiritual authority behind the "green movement" in Iran. And yet the erstwhile friend of Khomeini once played a major role as architect of the Islamic Republic. His metamorphosis from revolutionary to reformer is exemplary for the evolution of Iran's opposition. By Urs Sartowicz

Abdolkarim Sorush
For an Open Interpretation of the Koran The reformist thinker and philosopher Abdolkarim Soroush is one of a new generation of theologians that openly speaks out in favour of human rights and secularism in Iran. Katajun Amirpur about an awkward Iranian intellectual.

END_OF_DOCUMENT_TOKEN_TO_BE_REPLACED
Social media
and networks
Subscribe to our
newsletter