Benjamin Stora is considered the foremost historian of Franco-Algerian relations. Kersten Knipp spoke to him about the enduringly thorny relations between the two countries

​​ France and Algeria have completely different memories of their common history. How would you characterise these memories?

Benjamin Stora: For a long time – for almost 30, 40 years – France primarily fostered a culture of forgetting. People didn't speak of Algeria; they wanted to put that era firmly behind them – the war and, of course, the defeat, the ignominy of ultimately having to withdraw from Algeria. After all, the French considered this North African nation to be an integral part of their national territory. The Algerians, on the other hand, were faced with "too much" history. For them, it was about a memory that they could use to legitimise the existence of the nation and, above all, political power, which they tried to legitimise through heroic stories.

Why is coming to terms with the past so highly charged with emotion for both sides?

Stora: In the nineteenth century, Algeria was in the process of becoming a nation; it was exactly at this time that the French conquered the country. There have been inconsistencies in the process of national identity ever since. Anti-French Algerian nationalism was very strong at the time. After all, colonialism had hindered the emergence of a nation in the modern sense; that creates an extremely strong feeling of enmity. When the Germans invaded France, for example, they were attacking a very old, historically mature nation. This meant that the French were able to put up resistance on the basis of a historically mature awareness. In Algeria, things were very different. The country did not have a national tradition on the basis of which it could develop or to which it could refer. 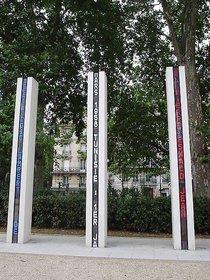 Shadows of the past: it began with a war of conquest and over 130 years of French rule in Algeria and ended with the Algerian war of liberation and Algeria's declaration of independence in 1962: Memorial to the victims of the Algerian War in Paris

​​ Nevertheless, one would assume that now, almost half a century after Algerian independence, a common memory could emerge.

Stora: That is not very likely; the two cultures of remembrance are too different. Moreover, the memory is also influenced by the present. After all, although the Algerians who live in France have become French, they identify with their parents' and grandparents' past. The French, on the other hand, ask themselves why the Algerians, whose forefathers fought for independence, are now living in France. So there is a gulf that generates a huge amount of bitterness or even hostility on both sides. These feelings are nourished by history, by classes in school, by history that has been handed down.

But the Franco-Algerian history has the potential to give meaning to things, something the Algerians in France can fall back on.

Stora: Yes, after all, this story ends with Algeria's triumph. To this day, the battles fought by the fathers and grandfathers during the war of independence are positive aspects for many Algerians, positive aspects of their individual identities too. To this day, this gives meaning to the life of Algerian migrants in France, especially in view of the difficult circumstances in which they live. Unemployment, racism, stigmatisation ... all of this fosters the inclination to create a personal identity for oneself on the basis of a story that culminates in a victory. In other words, identification feeds the need for pride and it legitimises one's own person. Hardly anyone in French society understands this.

Stora: More than anything else, it is the Algerians who feel pride. As the Algerian writer Kateb Yacine put it: decolonialism is one of the spoils of war. On the one hand, it constructs identities. On the other, one defines oneself through it in a negative manner, i.e. through the fight against something. The period of colonialism lasted a very long time, not only in Algeria. This is why there are many countries that remain francophone to this day. The young people in particular don't want to cut themselves off from French. Nevertheless, they are searching for their own, independent identity. They consider French to be an additional language alongside Arabic and the Berber languages. Naturally, decolonialism is by no way as intense now as it was in the 1950s and 1960s. However, one key question from this period remains: what is one supposed to think of the other, of France? How should one perceive it?

So you find it hard to imagine that a joint culture of remembrance of the colonial era could emerge.

Stora: Yes, at this moment in time, I find it very hard to imagine. After all, on the one hand we have French nationalism, which to this day does not want to accept the withdrawal from Algeria. Algerian nationalism, on the other hand, legitimises itself on the basis of the victory over its former colonial master. In other words, there are two, contrasting versions of history. This means that for the moment, at a time when those who were involved in the wars are still alive, it is highly unlikely that they will reach agreement. Both sides feel they are in the right. We will have to wait another few generations to arrive at a common view of things. Naturally, all of this has to be countered in a progressive, educational manner.

Home
Print
Newsletter
More on this topic
French-Algerian Relations: The Shadow of a Colonial HeritageYasmina Khadra: Love and Nostalgia in Times of War
Related Topics
Colonialism, Human rights, Islam and the West
All Topics

Algeria‘s regime is again cracking down on anti-fracking activists and the unemployed in the country‘s south. Yet EU countries remain keen to scale up their energy cooperation ... END_OF_DOCUMENT_TOKEN_TO_BE_REPLACED

Algeria's decision to unilaterally sever diplomatic ties with Morocco in August 2021 – days after the presidency announced in a statement their relations would be reviewed – was ... END_OF_DOCUMENT_TOKEN_TO_BE_REPLACED

Madrid's about-face on the Western Sahara conflict has enraged Algeria. Trade relations have been frozen unilaterally and a cut in gas supplies to Europe could be in the pipeline ... END_OF_DOCUMENT_TOKEN_TO_BE_REPLACED

Sultana Khaya, 41, has been peacefully resisting the Moroccan occupation of Western Sahara for many years. Because of her campaign to assert the self-determination of the Sahrawi ... END_OF_DOCUMENT_TOKEN_TO_BE_REPLACED

Since Spain abandoned its traditional neutrality towards the conflict in Western Sahara, Morocco has announced a "new phase" in relations between the two countries. But what is ... END_OF_DOCUMENT_TOKEN_TO_BE_REPLACED

An increasing number of government ministries in Algeria are announcing they will abandon French in future. They may be reacting to the mood among the population, but the move is ... END_OF_DOCUMENT_TOKEN_TO_BE_REPLACED
Date:
Mail:
Send via mail

END_OF_DOCUMENT_TOKEN_TO_BE_REPLACED
Social media
and networks
Subscribe to our
newsletter