Archaeology as a Political Issue

Few countries have such a comprehensive knowledge of archaeological treasures from the Islamic world as Germany. Ariana Mirza asked Claus-Peter Haase, director of the Museum of Islamic Art in Berlin, about the opportunities and difficulties involved in working with colleagues from Iran, Iraq, or Syria

Despite disputes about archaeological treasures, Claus-Peter Haase, director of the Museum of Islamic Art in Berlin, considers co-operation more important than anything else (photo: Stephan Schmidt)

​​In recent years there have been an increasing number of conflicts about the ownership of archaeological discoveries. Have German museums like Berlin's Pergamon Museum been involved in any such conflicts?

Claus-Peter Haase: You really have to put these things in context. These are isolated cases. When compared with the large number of objects that happen to belong to a universal museum, there are actually very few conflicts. Take Turkey, for example. Even though the media is paying great attention to cases involving objects that originated in what was the Ottoman Empire, this debate is more a private initiative than anything else - particularly in Turkey. To date, the Turkish government has only made official contact with state-owned museums in Berlin in a very small number of cases. There have been maybe three or four inquires in total, and none of them were for the Pergamon altar or any of the spectacular objects. In any case there are no direct requests for restitution, only inquiries. We are asked for solid proof of the fact that these objects are in Berlin legally.

In general, how are relations with the countries of the Islamic world? How closely do the Turkish museums work with the Pergamon museum, for example?

Haase: There are expert meetings at all levels. The directors of collections here in Berlin and the historical museums in, say, Istanbul know each other very well and joint projects are organised. For instance, they compare what pieces are in which collections. Findings from excavations conducted at the beginning of the 20th century were officially divided. That meant that the people who initiated the excavations - in this case people in Berlin or German universities - received a specific share of the artefacts discovered, and this share was officially delivered to the Berlin museums. The other half remained in Istanbul and went to the archaeological museum there. 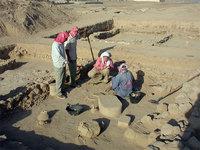 Excavations at the Roman castle Qreiye in Syria: despite political differences, German and Syrian researchers work together on projects organised by the German Archaeological Institute (photo: DAI)

​​This means that there are highly interesting links between the collections and, in this regard, the working relationship between the museums in the two countries is very uncomplicated, from what I hear. We here at the Museum of Islamic Art are currently co-operating with Turkish institutes on the preparation of the exhibition 'The Prussians and the Turks', which is planned for next year. The Topkapi Serail and the Dolmabahçe Serail in Istanbul are our direct partners in this venture. It is very pleasant working with them.

How is the co-operation with Iranian or Iraqi museums working out? Does the political situation influence working relationships?

Haase: In the case of both Iran and Iraq, there are no problems that would hinder the cultural work in any way. Of course Iraq is struggling with the current situation and for technical reasons we were not able to borrow artefacts from the national Museum in Baghdad for the Babylon exhibition [July to October 2008 in the Pergamon Museum – ed.]. The pieces in the Baghdad National Museum are still in high-security storerooms. Moving the objects out of there would be very dangerous.

Moreover, with the exception of very large objects, the collections in Baghdad Museum are not yet complete. Two years ago I visited this museum and saw these large pieces, which had been very well restored after the damage caused by the war. It was very impressive.

​​And regarding Iran, there are no conflicts there, either. Although I am of the opinion that this is certainly not a golden age for museums in Iran, we do get offers from the Iranian embassy from time to time. These often relate to very specific Islamic themes that would not be very palatable to our audiences. But we are in touch with the embassy and there have already been a number of joint events in the museum.

Artefacts from regions stretching from Spain to India are housed in the Museum of Islamic Art. The main focus is on the Near East, including Egypt and Iran. The exhibition shows artefacts from the eighth to the nineteenth centuries

​​ Nowadays, what does the law say about archaeological finds?

Haase: As a rule, we can only borrow findings for research purposes. This means that the objects can be analysed here in Berlin, but have to be returned to the country of origin. This has been standard practice in the museum business for several years now. But to be honest, this is not always an advantage in research terms, especially when research conditions in these countries of origin - in Syria, for example - aren't great. They don't have any laboratories where things can be examined, and it is also very time-consuming to arrange a loan for research purposes. On the other hand, the storerooms of the national museums in these countries are, of course, overflowing.

Can you explain this in more detail?

Haase: An important criterion is how the storeroom of a museum is set up. This is an indication of how seriously the collecting and research of objects is taken by the museum. If the room is too full, it is not well enough organized and things aren't being done properly. It doesn't matter who the objects belong to. The main thing is that they are available for research and that what is chosen is aesthetic or so highly interesting from the perspective of the history of a specific culture that it absolutely has to be shown.

You gave Syria as an example. Are the archaeological teams working there today only from Syria or are Germans still involved?

Haase: Yes, Syria is an El Dorado for archaeologists. There are, I think, about one hundred foreign missions in Syria in addition to their own. So there's a lot of research going on in the country. Moreover, doing all the necessary research is very laborious for our Syrian colleagues. They're simply not able to manage. We are constantly offering support, but it's not always easy to make sure they understand that these offers are well-intended assistance and not simply propaganda or arrogance.

You just mentioned collections that are in storage. Are researchers from Islamic countries interested in what is in storage at the Museum of Islamic Art in Berlin?

Haase: Yes, absolutely. Recently, for example, we had a team of Pakistanis here working on Iranian and Central Asian objects. Several colleagues from Iraq were also here at the invitation of the German Archaeological Institute. We aren't able to invite people ourselves. We don't have a budget for visiting academics. Unfortunately. We really should suggest that this be changed.

However, whenever we hear that colleagues who are interested in our artefacts are in the country, we try to get in touch with them. That usually works. We have long-standing working relationships with many colleagues in Turkey. They know the Islamic Museum extremely well, and in other countries the word is getting around - among other things as a result of a project we organised in conjunction with a large number of experts from the Islamic world. The internet portal 'Discover Islamic Art' makes it possible to go on a virtual journey through the countries of the Islamic world. Up to 3,000 objects and buildings can be viewed and are arranged and described on this site. In addition, it also explains which objects in various museums most probably come from a particular region and puts them in their architectural context. This website is a wonderful joint project that has been realised by ourselves and researchers from Islamic countries.

Born in 1944, Prof. Dr. Claus-Peter Haase is a scholar of Islam and a professor at the University of Copenhagen. Since 2001 he has been director of the Museum of Islamic Art in Berlin.

Interview with Yasser Hareb
"Culture Can Heal Political Wounds"
According to Yasser Hareb, vice president of the Al Maktoum Foundation, cultural exchange plays a key role in the fostering of international understanding and the institutionalisation of a fruitful cultural dialogue between the West and the Arab world. Loay Mudhoon spoke to him about the importance of culture in international relations

Afghanistan Museum in Exile
Art Objects in Boxes
Cultural treasures of various origin were stored in the Afghanistan Museum in Switzerland during the country's long civil war. Now the objects are being packed up again to be shipped back to the National Museum in Kabul. Aslan Khassan reports