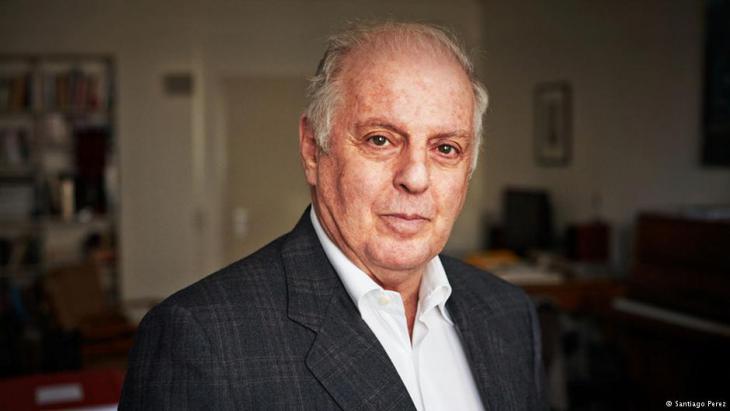 The West-Eastern Divan Orchestra celebrates its fifteenth anniversary this year. How do you feel about its development so far?

Daniel Barenboim: From an artistic point of view, it's been very positive. To begin with, it was a youth orchestra, in which the quality of the musicians varied. That balanced out later. It now has a wide repertoire, which it performs on large stages in places like the Salzburg Festival, Berlin, London …

On the non-musical level, the outcome has been less impressive. The true greatness of the West-Eastern Divan Orchestra will only be reached on the day it can play in Libya, Syria, Jordan, Egypt, Israel, Palestine, Turkey and Iran – the countries the musicians come from. We played once in Palestine in 2005; that would be inconceivable today.

The situation in the Middle East took a dramatic turn for the worse this past summer. Did that have an effect on the way the orchestra members work together?

Barenboim: Some were undecided about whether to travel. In the end they all came, but the first few days weren't easy because the Israelis and the Palestinians had very different views on the Gaza War. There were some very difficult moments. But you can't expect a Palestinian to empathise with an Israeli family that feels threatened, or an Israeli to feel empathy for the dreadful things happening in Gaza.

Were there debates between the musicians?

Barenboim: This is not a political project, but a human one. We are not aiming for political consensus between the orchestra members. With 120 people from the region in the orchestra, that wouldn't be possible. But we do try to help them accept the others' views, think about them and make an effort to understand them – especially when they don't entirely agree with them.

Deutsche Welle recently interviewed the Israeli writer Amos Oz. He began the interview with a question: "What would you do if your neighbour across the street sat down on the balcony, put his little boy on his lap and started shooting machine gun fire into your nursery?" Mr Barenboim, would you have an answer to that question?

Barenboim: Many people in Israel – not all of them – are all too fond of asking questions about others' duties, but never ask themselves about their own obligations. When we talk about history, we can't just refer to the month of July 2014, we have to go much further back.

To put it in an appropriate framework, the story begins around about the time of World War I, when the Jews in Palestine made up less than 15 per cent of the population. How did it happen that they possess a state of their own and the Palestinians became refugees in their own country and a minority?

Questions have to be asked on both sides. When it comes to the past, there is sadly no clear and coherent answer for both. What remains of the invasion of Gaza, regardless of whether it was justified or appropriate or not? There are countless dead to be mourned, including children. And hate has been stoked up that will be very difficult to get rid of for several generations. It's not easy to talk about hate between adults, but how much worse is hate among children… The operation in Gaza resulted in a great deal of suffering for the Palestinians. The outcome for Israel is that it's gone back to square one. The former Spanish prime minister Felipe Gonzalez called it a "permanent stand-off". 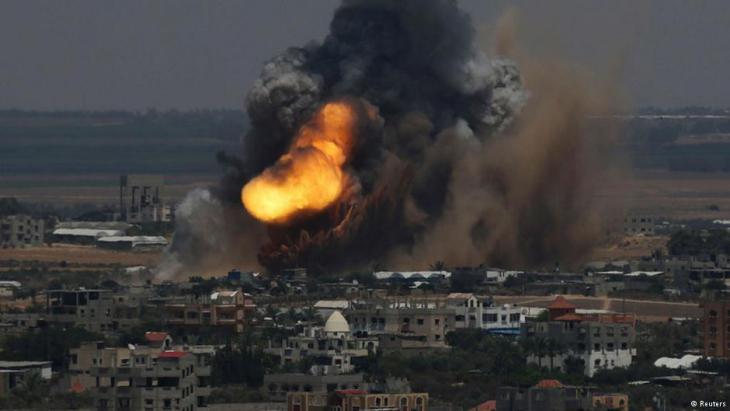 A rocket lands in Gaza city during the conflict in 2014. Daniel Barenboim sees the Israeli-Palestinian conflict as a never-ending spiral of violence. Says Barenboim: "The operation in Gaza resulted in a great deal of suffering for the Palestinians. The outcome for Israel is that it's gone back to square one"

Do you think the conflict is seen from a different perspective at international level after the events of the past summer? Sweden has recognised Palestine as a state, Britain carried out a symbolic ballot on the subject and France has announced plans to recognise Palestine if the peace negotiations fail.

Barenboim: While international perception is important, in the end, the most urgent thing is the quality of life for people in the region. When it comes to Israel, the pressure from outside is rather weak. We have to tell it like it is. If the USA wanted to, they could solve the conflict in three days by exerting pressure on the Israeli government – I'm not talking about the Israeli state here, just the Israeli government.

The entire Western world has committed itself to guaranteeing Israel's existence and security. That's fair, especially after the Holocaust. But this guarantee ensures nothing but the "permanent stand-off" I mentioned, from which the whole world suffers. If the international community is seriously, genuinely, honestly and determinedly interested in looking after the fate of the Jews, it has to be aware that when it supports the Israeli government's policies, it is only helping maintain the "permanent standoff".

In 2010, you listed a number of guidelines for the United States to abide by in dealing with the conflict. Some time has passed since then. Did you expect more of Obama's Middle East policies?

Barenboim: I remember his speech in Cairo. That was the first time I thought we would finally see light at the end of the tunnel. But that speech didn't change reality. However, the discourse has since adapted to reality.

The Gaza conflict has disappeared from the front pages. Are you afraid it is losing significance at political level too, in the face of more urgent threats such as Islamic State and the Ebola epidemic?

Barenboim: Since the fall of the Berlin Wall 25 years ago, the world has been suffering from a lack of leadership. During the Cold War, there was a balance. Then everything turned to one side, and the West began to behave in an uncontrollable manner as if it was the victor, as if capitalism were the answer to all the world's suffering. With the loss of the United States' hegemony and moral authority, we're at a unique moment in history, in which various conflicts like Islamic State, terrorism in Afghanistan, the situation in Ukraine or the Arab-Israeli conflict well up again and again and alternate. That's not because the world's individual leaders don't tackle the problems, but because we simply don't have a leading power. That's the key problem I've observed since the fall of the Wall. 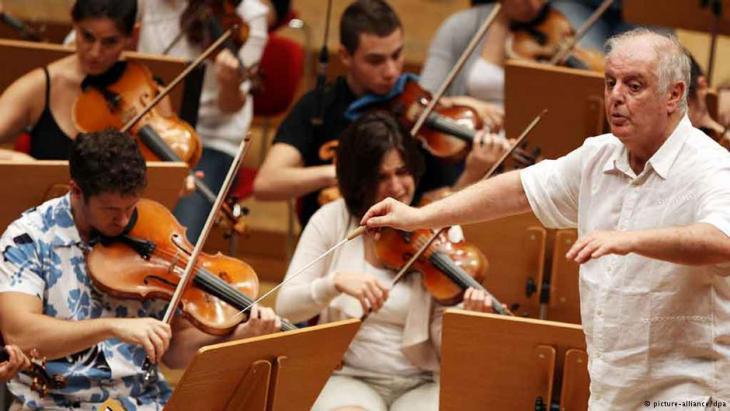 Breaking boundaries: Daniel Barenboim conducting the West-Eastern Divan Orchestra, which is made up of young musicians from Spain, Palestine, Israel, Lebanon, Syria, Jordan, Egypt, Turkey and Iran. Barenboim's aim is to overcome cultural differences and conflicts through music

Mr Barenboim, you're one of the most significant living musicians of our day. Why do you think it's so important to devote yourself to other world problems aside from your work?

Barenboim: My friend Edward Said wrote a book about the role of the intellectual in society. Said said that the intellectual has a moral obligation to criticise the establishment. There are a lot of people in the world of music, both on stage and in the audience, who consider music a wonderful thing and who live in ivory towers. I don't like ivory towers. I feel I have a responsibility with the West-Eastern Divan Orchestra. The democracy we enjoy in this part of the world grants us certain rights, but it also imposes obligations on us.

Would you ever go into politics?

Barenboim: Absolutely not. As a citizen, I have the right to express my opinion freely. And this is where we come to the dangerous issue of anti-Semitism. It cannot be that I'm automatically called an anti-Semite because I criticise the Israeli government. There are two things we must never forget: firstly, the Palestinians are Semites just like us Jews, and secondly, what's being criticised is the actions of a government and not a nation in itself.

Together with Edward Said, conductor Daniel Barenboim (born in Buenos Aires, Argentina, in 1942) founded the West-Eastern Divan Orchestra in 1999. The orchestra brings together musicians from Spain, Palestine, Israel, Lebanon, Syria, Jordan, Egypt, Turkey and Iran. He has also been head conductor at the Staatsoper unter den Linden (Berlin) since 1992 and has conducted at the Milan Scala since 2011. Throughout this time, he has also continued his career as a pianist on major stages of the world.

A leading light of Israeli theatre, Ofir Henig has directed the Israel Festival and is the only female director to have been awarded the Israel Theatre Prize. These days, however ... END_OF_DOCUMENT_TOKEN_TO_BE_REPLACED

With the current leadership of Iran quick to lay the blame for the Iran protests on Israel, the chances of harmonious relations between the two countries still seems remote. Yet, ... END_OF_DOCUMENT_TOKEN_TO_BE_REPLACED

Daniel Barenboim is not only a world-famous pianist and conductor. He has also worked tirelessly to foster understanding and reconciliation between Palestinians and Israelis. By ... END_OF_DOCUMENT_TOKEN_TO_BE_REPLACED

After a two-year hiatus, the Arab League re-convened at the beginning of November in Algiers against a backdrop of uncertainty and discord. By Pierre Boussel END_OF_DOCUMENT_TOKEN_TO_BE_REPLACED

On 1 November, elections are set to take place in Israel for the fifth time in four years. If Arab minority voters decide to stay home out of frustration at their divided parties ... END_OF_DOCUMENT_TOKEN_TO_BE_REPLACED
Author:
María Santacecilia
Date:
Mail:
Send via mail

END_OF_DOCUMENT_TOKEN_TO_BE_REPLACED
Social media
and networks
Subscribe to our
newsletter