Where does this inconsistency manifest itself?

El Omari: The most-debated topic here is the headscarf. To illustrate it with an example: there are activists who say that no contextualisation of the Koranic suras is necessary and that everything that is oppressive to women must be removed. The headscarf is seen as an instrument of oppression. But there are also women in this country who, as feminist Muslims, have become spokeswomen and who see wearing a headscarf as a duty.

But if covering one's hair is seen as a duty, what about women's political power to make this decision for themselves? Is a woman in whom it was inculcated as a little girl that wearing a headscarf is a duty really covering her head voluntarily? This is why it is so important to create the contemplative space that allows women to evaluate the sources without bias and come to their own conclusions. The idea is to support them and to respect the decision they make out of their own free will. Women who choose not to wear a headscarf and those who have chosen to wear one on the basis of a politically mature attitude must be equally supported.

Unfortunately, however, such space for critical reflection hardly exists at all in Muslim everyday life. We must therefore work to ensure that space is created. One such is certainly the Islamic theology department at a university, which can also supply women with the necessary tools for placing and understanding texts in their historical context. 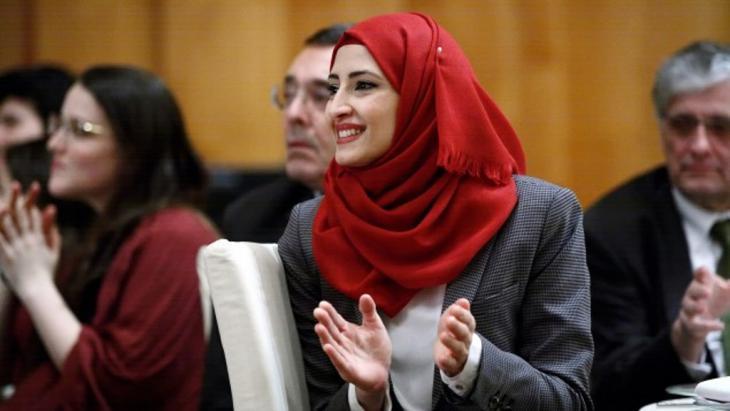 "Feminism means holistic thinking and is expressed in an attitude – one of liberating women from their political powerlessness. We must stand up for all oppressed women", says Dina El Omari

El Omari: Feminism means holistic thinking and is expressed in an attitude – one of liberating women from their political powerlessness. We must stand up for all oppressed women. If the focus is only on women who are oppressed because they wear a headscarf and whose freedom is therefore restricted, but not at the same time on women who have decided against a headscarf, then this is not feminism.

In my view, a Muslim feminist is a woman who engages with her own sources very self-critically – both the Koran and other religious sources. She must critically question the sources with a strong patriarchal tone, interpret them against their historical context and then proceed holistically. This means working for equal rights on all levels – including a woman's right to wear a headscarf or not as she sees fit. Such a feminist works to create spaces in which women can reach an informed decision.

El Omari: Mosques should be such places, but unfortunately they are so only very marginally, because they are dominated by a strong patriarchal structure. The school is therefore the most important place because it reaches so many people. In my opinion, Islamic religious education is very important. For one thing, so that girls have direct contacts, teachers with whom they can reflect on their religion and talk about what they are being told about Islam at home and in the mosque.

What is your view of the public debates on Islam in general and Muslim women in particular?

El Omari: I think they should be balanced. "Balanced" does not mean that the audience has to agree with the guest on the podium. I plead for a plurality of opinions.

If you want to conduct an honest debate, you as organiser should make sure that you don't offer a forum to just one voice – especially not to those who argue in simplified, polemic terms. Unfortunately, it is precisely such people who are heard most and have the greatest influence.

Dina El Omari is a research assistant at the Centre for Islamic Theology at the University of Munster. The 36-year-old is a post-doctoral fellow in the junior research group "Theology of Mercy" with a research focus on "Feminist Koranic Exegesis". Since 2015 she has been responsible for the research area "Koran and Koran Exegesis".

Dalia Hatuqa is an experienced journalist who has reported on the Israeli-Palestinian conflict from Ramallah, Washington DC and Amman. A writer for Time Magazine, Foreign Affairs ... END_OF_DOCUMENT_TOKEN_TO_BE_REPLACED

Since President Abdul Fattah al-Sisi seized power in Egypt in 2013, he has ruled the country with an iron fist. Civil society, opposition and free press struggle to survive. Tens ... END_OF_DOCUMENT_TOKEN_TO_BE_REPLACED

Many Turks are dissatisfied with the international status of their country. At the same time, opinion polls reveal great scepticism among the Turkish population towards the USA. ... END_OF_DOCUMENT_TOKEN_TO_BE_REPLACED

The German government is planning to legalise cannabis before the end of this legislative period. So what does Islam have to say about its consumption? Will changing the law alter ... END_OF_DOCUMENT_TOKEN_TO_BE_REPLACED

In his latest book, Navid Kermani poses questions about God. It feels like no one could have done it better. His writing elicits smiles, doubt and wonder. By Melanie Christina Mohr END_OF_DOCUMENT_TOKEN_TO_BE_REPLACED
Author:
Canan Topçu
Date:
Mail:
Send via mail

END_OF_DOCUMENT_TOKEN_TO_BE_REPLACED
Social media
and networks
Subscribe to our
newsletter