The current wave of refugees crossing the Mediterranean from North Africa is a reminder of the many migrants who have already made the dangerous journey and have been living in Europe for some time. Volker Thomas spoke to Dr Dita Vogel, head of the Irregular Migration research unit at the Hamburg Institute of International Economics (HWWI), about their precarious status

Dr Vogel, how many "illegal migrants" are there in Germany at present? 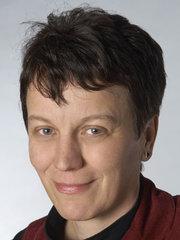 According to Dita Vogel, some illegal entrants come to Europe by boat across the Mediterranean or to the Canaries while most enter the EU legally as tourists or manage to pass border controls with forged documents

​​Dita Vogel: Nobody knows exactly how many persons without residence status are currently living in Germany. According to estimates arrived at by our institute, between 200,000 and 400,000 is a realistic figure. The number of illegal residents has been declining for years. Our maximum estimate for 2005 was as high as 700,000 undocumented persons. The decline is to some extent related to the enlargement of the EU, which has led to numerous immigrants – such as those from Poland – gaining legal residence status. A similar trend can be observed in other EU countries, where regulatory programmes and the economic crisis have likewise contributed to the decline.

You use the term "irregular migration". Why?

Vogel: "Irregular migration" is a term that is gaining increasing acceptance in international organisations and scientific discussion. Irregular migrants are people who are not entitled to reside in a country under that country's law. They were not permitted to enter it and have done so nevertheless, or should have left the country and have remained there. Official texts often speak of "illegal residence". The term "illegal residents" is frequently felt to be stigmatising.

Are all "irregular migrants" refugees and persecutees or should we view them as people with entrepreneurial spirit and the courage to take risks?

Vogel: The two are not mutually exclusive. Refugees or persecutees who manage to get as far as Germany will generally not be among the weakest and poorest in their home countries. Illegality is often a transitional stage: they enter the country illegally, apply for asylum and may end up going underground again if they are unable to justify their reasons for seeking asylum or fail to have their grounds for fleeing their countries recognised as entitling them to refugee status.

But many of them work illegally…

Vogel: Many irregular migrants succeed in joining Germany's underground economy, finding employment in domestic service, for instance, or in restaurants and on farms or building sites. Despite the low wages, some of those who are employed in this way manage to earn a living through their industry and entrepreneurial spirit. Others are cheated of their wages and don't know how to defend themselves. 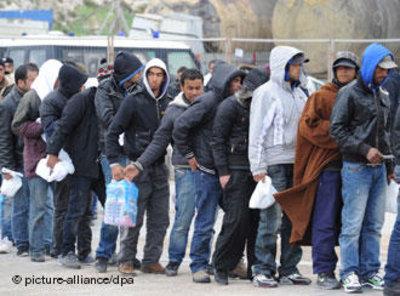 Searching for a better life: since the overthrow of President Ben Ali in Tunisia, over 5,000 people have made the crossing to the Italian island of Lampedusa near the North African coast

​​Given the tougher border controls, how do they gain entry to EU member states without documentation?

Vogel: Illegal entry by boat across the Mediterranean or to the Canaries is the most widely known route, but certainly not the most frequent. We can assume that most irregular migrants nowadays enter the country legally, as tourists for example, or manage to pass the border controls with forged documents.

How do the destination countries deal with irregular migrants? Is the situation in Germany comparable with that in the other EU member states?

Vogel: Basically, all EU member states agree on the one hand that human rights must be upheld, irrespective of residence law, and on the other that people without a right of residence must leave the EU as soon as possible – preferably voluntarily; by force if necessary. Legalisation should only be possible in exceptional cases. However, there are still major differences in the mode of implementation employed by the various member states. In Germany, for example, civil servants are obliged to pass on data and must report cases of illegal residence to the competent foreigners' authority. It was not until last year that this obligation was amended in recognition of the fact that it might stand in the way of children attending school or people receiving emergency hospital treatment. This amended obligation must now be put into practice in the field so that parents without residence status will send their children to school and have the courage to go to hospital for emergency care. In other countries, cooperation on the part of officials is less extensive.

What ways are there out of illegality?

Vogel: The primary and most important route is voluntary repatriation to one's home country. For many people, illegality is only a stage in their lives. They return home because they have achieved their income goal, because the situation in their home country has improved or because they cannot bear to live a life of illegality any longer.

And in the receiving country?

​​Vogel: Some countries have legalisation programmes. Other countries – such as Germany – temporarily suspend deportation of those who cannot be deported. Migrants thus enter a grey area, which may end in renewed illegality, legality or return.

The EU intends to take steps to combat exploitative practices and prohibit the employment of irregular migrants through strict controls. Will that help?

Vogel: In the final analysis, the provisions on uniform penalties and controls are very vague. The mode of implementation is left up to the individual member states. What is more important is the fact that the Employer Sanction Directive of 2009 stipulates that the states should put in place effective mechanisms that allow employees to lodge complaints against employers, also through third parties such as trade unions. The battle against the worst cases of exploitation of illegally employed third-country nationals, involving cases where persons without status are cheated of their wages, can only be fought with employees, not against them. This, in turn, protects German employees, as nobody can compete against a dumping price of zero euros an hour.

Others recommend preventing immigration in the country of origin. What do you think of this recommendation?

Vogel: This is largely reality. Visas are only granted after close scrutiny and airline companies that have not checked passengers' documents properly must transport them back to their home countries and bear any ensuing costs. This method works but has negative side-effects that have not been sufficiently investigated, for example the extent to which desirable visitors are deterred from travelling. Stricter border controls also tend to lead to an extended period of stay of illegal migrants because re-entering the country or moving to and fro becomes risky. In academic circles, this type of phenomenon is also referred to as the "ratchet effect".

Iraqi Refugees in Germany
A New Life in Safety
As part of its contribution to the United Nations' resettlement programme for Iraqi refugees, Germany will take in a total of 2,500 refugees in the coming months. In this regard, the Federal Republic is spearheading the EU's role in the programme. Martina Sabra reports

The EU and Iraqi Refugees
The Myth of "Voluntary Return"
EU interior ministers have recently agreed to take in 10,000 Iraqi refugees currently living in Syria and Jordan. But human rights organizations criticize the preference given to Iraqi Christians and warn that the Iraqi government is painting a false picture of the grim situation in Iraq in an effort to lure refugees back home. By Anja Zorob

Dossier
Migration in Germany
Germany has become a major target of immigration over the last few decades. Our dossier looks at the history of migration to Germany, the integration of migrants into German society, and the variety of their cultural expressions

END_OF_DOCUMENT_TOKEN_TO_BE_REPLACED
Social media
and networks
Subscribe to our
newsletter