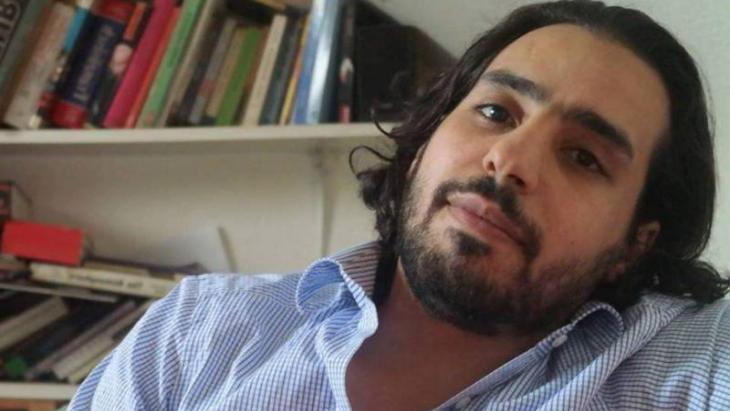 Trainee doctor Ahmed Said was arrested in Egypt in 2015 and imprisoned for one year. His crime? Taking part in a peaceful event to mark the 2011 revolution. Part of his sentence was spent in the infamous ″Scorpion″, a prison where torture is rife. Interview by Delia Friess

On 2 March 2017, the Supreme Court of Egypt acquitted former president Mubarak of conspiring in the killing of protesters. You were part of the demonstrations on Tahrir Square in 2011 and also provided medical care for the protesters. What was the violence like?

Ahmed Said: I was one of many hundreds of thousands of protesters on Tahrir Square and other public spaces. We experienced and witnessed state violence on all levels. We saw the police officers and soldiers shooting us directly and watched many people die. A considerable quantity of video footage exists that confirm this. Every Egyptian, not just those who were on the streets, knows very well that Mubarak must be held responsible for what happened and of course he wasn′t acting alone. Yet many of the others have also been acquitted too. Apparently no one is judged to be responsible or guilty for the deaths of thousands. One of Egypt′s major problems is that there is no independent justice system. The judiciary is controlled by the military regime, which is an extension of the Mubarak regime and therefore cannot be trusted. Indeed, it is widely seen as a tool, which is used by the regime to punish political opponents, activists and civil society as a whole.

When were you arrested and what was the charge?

Said: I was arrested on 19 November 2015, the 4th anniversary of the Mohamed Mahmoud street battle between the protesters and the police. On that day I went to downtown to the end of Mohamed Mahmoud street. I was sitting in a cafe with a friend while the police outside patrolled the city centre streets, as is their custom on any anniversary relating to the January 25 revolution. They caught sight of me – I heard the police officer shouting to his assistants, ″Get me the guy with the long hair″. One of the common revolutionary stereotypes is that the men all have long hair.

They stopped us and took down our personal information, refusing to let me make a phone call. The police officer then said he would take me down to the station to make sure I wasn′t on their wanted list. When we got there, I was blindfolded – they began torturing and interrogating me. It′s important to mention that on the same day, some three hours before my arrest, we had organised a small protest on 6th of October Bridge for about 30 minutes. Yet I wasn′t arrested for this: it was an arbitrary intervention, as experienced by so many others who are jailed or forcibly disappear.

You were held in various prisons, including in Cairo′s notorious Scorpion (Al-Aqrab) prison. What was it like? 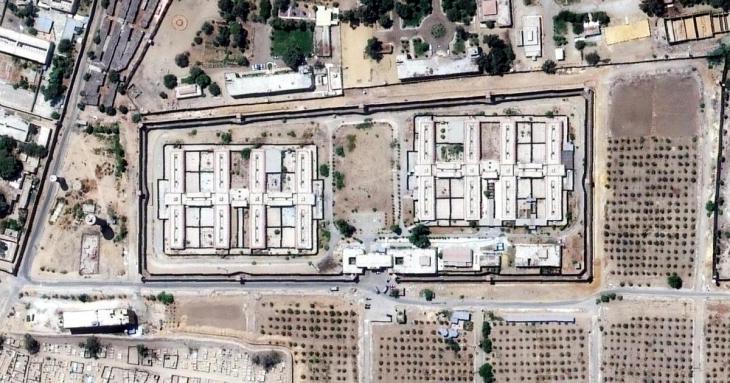 Inhumane prison conditions: conditions in the Egyptian top security prison Al-Aqrab have been sharply criticised by Human Rights Watch in the past. Inmates – including many political dissidents – are regularly abused, the organisation claims. ″The Al-Aqrab prison sits at the end of a long chain of state repression, ensuring that political opponents are abandoned without a voice and without hope,″ says Joe Stork, deputy director for the Middle East and North Africa with Human Rights Watch

Said: I believe Egyptian prisons are typical of the kind you find in dictatorships. Even official regulations regarding prisoners′ rights exist, they are not applied. The situation of the prisoners is completely dependent on individual prison guards or officers. As a result conditions vary between the prisons. One aspect they all share, however, is a lack of prisoner access to the most basic rights. You will find guards controlling every little detail of a prisoner′s life, such as not allowing him to receive visitors, or putting him in solitary confinement without light, water or food for days, if not weeks. All this without any supervisory authority.

Summary beatings are common. Medical care is lacking and this, in addition to negligence, is used as an additional punishment. Prisoners are prevented from receiving medication from outside or obtaining an alternative from the prison authorities. Even in urgent cases, prisoners must wait months before they are transferred to hospital. I witnessed one case of a prisoner who died after suffering for one week without receiving emergency medical care. Despite going to the prison clinic four times during the last seven days of his life, he was dismissed every time without treatment.

And the actual conditions of detention?

Said: It varies from prison to prison. In Al-Aqrab prison, where I spent most of my sentence, the cell was about 9m² including a toilet, which was merely a hole in the ground. The number of inmates in the cell ranged from 10 to 13. We slept on cement platforms. In other prisons the number can be twice as high. I was not allowed to receive books, newspapers or letters from outside. Inmates were only allowed to leave the cell for one hour a day, despite the fact that the law stipulates four. Before and during the court hearings and while I was in prison, I had no chance to talk to my lawyer. I was only able to talk to my family during the prison visits, but they prevented me from receiving visitors twice without explanation.

Said: It was very quick. The verdict was there within two weeks.

What was the political atmosphere like in Egypt before your arrest?

Said: Since the military coup of 30 June 2013 and especially once Abdul Fattah al-Sisi became president of Egypt, there has been no real political life in Egypt. The official narrative of the regime has accelerated an extremely nationalist and chauvinist propaganda and created an environment of fear, where any opposition that counters this narrative – including civil society initiatives – has been criminalised. Most of the opposition groups have either been silenced or have left the country. Back then there were more than 45,000 political prisoners ; now the number has increased to over 60,000.

Having spent a year in prison you were pardoned in November 2016 along with 81 other prisoners and were able to leave Egypt for Germany. How much repression of intellectuals, human rights activist and political opponents in Egypt is there today?

Said: People are naturally afraid of talking too loudly in such an environment of fear. Even if they aren′t expressing a direct opinion about the regime, they avoid saying anything that is incompatible with official propaganda. Take the Egyptian writer Ahmed Nagi – he was imprisoned for alleged sexually explicit content in his latest novel ″The Use of Life″. Another example is the forced closure of the Al-Nadeem Centre for the Rehabilitation of Victims of Violence and Torture about two weeks ago. And again, these cases are not exceptional: the regime is determined to oppress any thoughts or political opinions that take exception with the Sisi government.

The Italian student, Giulio Regeni, who was conducting research into the Egyptian union movement and opposition groups disappeared on 11 January 2016 and was found dead a few weeks later. His body showed traces of torture. The case led to demonstrations and diplomatic tensions between Egypt and Italy. How do you regard the incident? 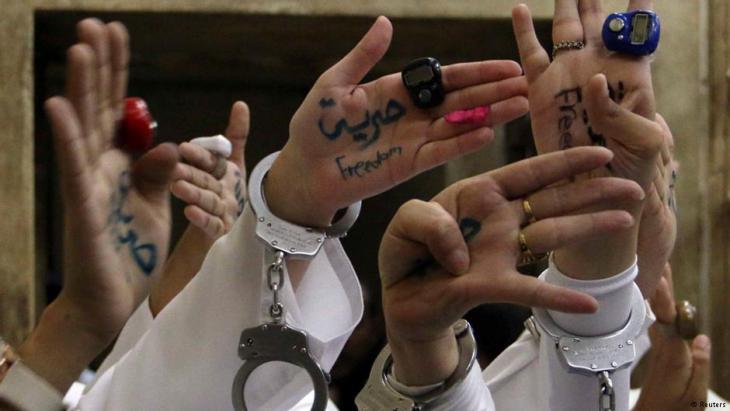 A cry for freedom: according to estimates by human rights organisations, tens of thousands of dissidents are currently being held in Egyptian prisons. "I am just one of thousands who have ended up in prison because of their political views. So much still needs to happen,″ declared Ahmed Said following his release in November 2016

Said: Regeni was another Khaled Said [Ed. who was beaten and openly killed by the secret police in Alexandria in 2010]. But this time he wasn′t Egyptian. The Egyptian general attorney confessed recently that Egyptian police were involved in the torture and murder of Regeni and passed some names of police officers to the Italian general attorney. The official media in Egypt tried to represent Regeni as a spy to legitimise his murder – indeed, it′s a story that is still circulating. Personally I don′t think that just two or three officers were responsible for this murder; it was legitimised by the entire regime.

In 2013 a court jailed the blogger and activist Alaa Abdel Fattah for five years. Social networks were considered one of the most important democratic instruments during the Arabic Spring. How dangerous are social networks in Egypt today?

Said: Social media are now under close surveillance and direct monitoring by the security forces. Recently, a young man was sentenced to three years simply for liking something on Facebook.

Thousands of Egyptians flooded the streets to demonstrate against Mubarak in 2011. Then a couple of years later, they also demonstrated against the elected President Morsi. Do you think we will see a new wave of protests against Sisi?

Said: People are always going to rise up against any oppressive president or ruler who doesn′t live up to their expectations. Especially when there is no other democratic way of bringing about change.

Many consider Egyptian society to be divided. A minority in Egypt elected the Muslim Brotherhood, another section of society desires the total separation of state and religion. How do you assess the situation?

Said: I think that the military used this difference in ideologies to increase the conflict and create an environment of instability after the revolution. At the same time, I think that whatever their differences, all the various opposition groups are suffering under this regime. The first stage of any revolution is liberation; the second is the awakening of a democratic system.

The devaluation of the Egyptian pound combined with rising food prices is taking its toll on Egypt. More and more people are slipping into poverty. Karim El-Gawhary reports from ... END_OF_DOCUMENT_TOKEN_TO_BE_REPLACED

Abortions are illegal in Egypt unless they are necessary to save a married woman's life. But that doesn't stop local women from having one. Egyptian society needs to acknowledge ... END_OF_DOCUMENT_TOKEN_TO_BE_REPLACED

Food prices doubled, salaries halved, banks restricting withdrawals: Egyptians now have the same problems as the Lebanese. But if things get worse here, the fallout will be far ... END_OF_DOCUMENT_TOKEN_TO_BE_REPLACED

Giessen, Eichsfeld, Kusel, Berlin – cars bearing old German number plates are the latest trend on the streets of Cairo. Many Egyptians regard the discarded plates as chic. What ... END_OF_DOCUMENT_TOKEN_TO_BE_REPLACED

Egyptian Sufis have been on the defensive against the country's Islamists for decades. Meanwhile, interest in mysticism is growing among the young members of Cairo’s middle and ... END_OF_DOCUMENT_TOKEN_TO_BE_REPLACED

END_OF_DOCUMENT_TOKEN_TO_BE_REPLACED
Social media
and networks
Subscribe to our
newsletter