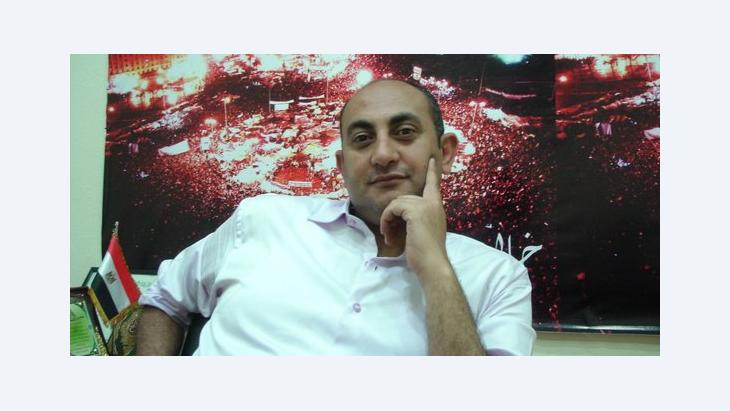 Khaled Ali, you are a successful lawyer and activist representing the concerns of workers, farmers and students. What motivated you to enter the world of politics and the presidential race?

Khaled Ali: I would like to bring the concerns that I have so far represented in the courts into the public arena, as a way of increasing awareness and broadening impact. As president, I could throw my weight behind those concerns on a political level and on a larger scale.

At 40, you're the youngest presidential candidate in these elections. Gamal Abdel Nasser became president of Egypt at the age of 36. Do you see yourself following in his footsteps?

Khaled Ali: Of course I admire Nasser for what he achieved for the populace, but I differ from him and his politics on several levels. I believe in a civil society, a civil government and social justice, issues that I am especially committed to. I want to establish a democratic nation.

Nasser's vision was one of a united Arab nation. This vision evaporated under Sadat. Do you plan to revive this nationalistic ideal?

Khaled Ali: We don't want to revive the vision of Abdel Nasser, but we aspire to an alliance with individual Arab states. In a larger context, we also aim to work with the African continent. 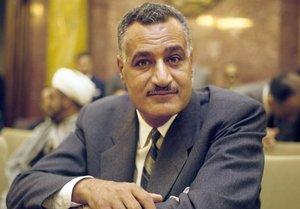 Rejection of Nasser's pan-Arabic state model: "We don't want to revive Nasser's vision, but we aspire to an alliance with individual Arab states," says Khaled Ali

​​We want to convey the dream to all nations, make them realise that they can improve their situation and eliminate the poverty situation in which the continent and Arab states are currently trapped.

If you became the president of Egypt, which nations would be Egypt's key partners?

Khaled Ali: The countries of Africa and the Arab states. All those nations who seek independence from industrialised first-world nations. The world is bigger than Europe. We will appraise which nations best serve Egypt's interests. Relations with other countries will be based on common interests. We want to determine our future ourselves. We won't accept economic or political notions imposed upon us by the United States.

Relations with Israel are a particularly sensitive issue. There has been repeated criticism of sales of cheap natural gas to Israel in recent years. What's your view on the matter?

Khaled Ali: All commercial and economic contracts agreed with Israel during Mubarak's rule are undergoing assessment to see just how far they serve the interests of the people of Egypt. We cannot accept that people in Spain, Israel and Jordan are buying Egyptian gas at a cheaper price than the Egyptians themselves.

It is normal that after a revolution, a nation scrutinises all contracts signed under the former regime. As far as the peace accord with Israel is concerned, we will honour it as long as Israel does the same. This must be based on mutual respect.

More than a year after the revolution, young, left-wing, secular forces in Egypt are still badly organised. It has long been common knowledge that after the fall of Mubarak, the Muslim Brotherhood would come out as the only well-organised group. Why didn't the young revolutionaries immediately begin to form political parties and draw up agendas?

Khaled Ali: The main reason was a lack of money. The revolutionary, left-wing groups have practically no funds. If they had just half of what the Islamist groups have, things would look very different, because people know them through their commitment to disadvantaged members of society. 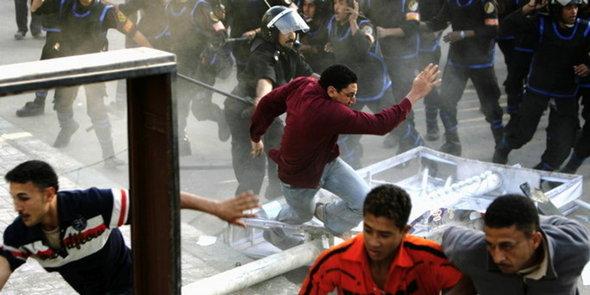 Prelude to the social revolts and the uprising against the Mubarak dictatorship: In the years 2006 and 2006, protests were held in the industrial city of Mahalla El-Kubra in the Nile Delta, the centre of the Egyptian labour movement, against inflated food prices and low wages. On each occasion, the regime found itself severely tested by the strikes and unrest

What strategies do you have in place to undermine the two major power blocs, the Islamists and representatives of the old regime?

Khaled Ali: Anyone wanting to engage in politics has to go out on the street and talk to the people – as well as working in poor districts, setting up courses, supporting groups and basically maintaining a presence in these areas. We've got a long road ahead of us – and it's going to cost us not just time but also money and effort – if we're going to fight against the Islamic alliance that currently holds the nation in its grip.

Not that I'm pessimistic. On the contrary, I'm optimistic about the future and I think it's quite possible to defeat both camps, the Islamists and the old regime. But it's going to take time. We still have to work very hard on the streets to win this battle. And not just through debates and protests against the army, military council and the Islamists, but also through concrete work with the people at the grassroots of society.

As a lawyer and activist you have been defending the rights of workers and farmers for years. You witnessed the major labour strikes of recent years at first hand. Were these strikes the prelude to the revolution that began on 25 January 2011?

Khaled Ali: I had been waiting for this revolution for years. The dire economic situation of large sections of the populace is the cause of the revolution. 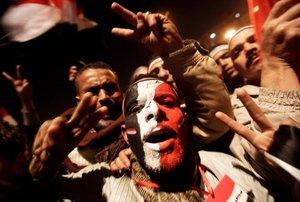 Shoulder to shoulder in opposition: The "Day of Rage" against the Mubarak dictatorship united left-wingers, liberals and Islamists in the rebellion against poverty, despotism and corruption

​​And because to date nothing has changed in this regard, I'm expecting the revolution to go into a second wave if the new president and parliament don't fulfil public expectations of an improvement in their economic situation and social justice.

Many companies were privatised under Mubarak. Would you reverse these privatisations?

Khaled Ali: In my capacity as lawyer, I have filed several corruption charges against privatised companies and demanded their re-nationalisation. If it can be proven that corruption was involved in the privatisation of these concerns, then they must be brought back into the public sector.

Are private companies more corrupt than public ones?

Khaled Ali: Corruption is widespread. It was systematically introduced by the old regime and to this day, it's still a huge obstacle to the establishment of a democratic country or system. We are battling corruption in both the private and the public sector.

In a class action lawsuit for several workers in the public sector, you secured a minimum wage of 1,200 Egyptian pounds (150 Euro). Do you plan to introduce minimum wages for all public sector workers?

Khaled Ali: Yes, I am committed to securing minimum wages. I am also currently representing a lawsuit in favour of maximum wages in the public sector. But it's not just about wages. At the same time, I'm also fighting for better conditions for workers and farmers with respect to the cost of healthcare, education, land rights and debt relief for farmers. All this must be integrated into Egypt's wage structure in the coming years.

If you are elected the new president of Egypt in June, you will have to contend with an Islamic parliamentary majority and probably also an Islamic prime minister. How will you manage this scenario?

Khaled Ali: The prime minister doesn't necessarily have to be drawn from Islamist ranks. If I become president, I can appoint both the government and the prime minister. The new constitution hasn't been written yet. If we retain the old presidential system, then the president elects the government. I will do my utmost to reach an understanding with the Islamist-dominated parliament. But if it comes to a confrontation, I would remain committed to my convictions with the support of the public.

Sex education – taboo in the Middle East. Or is it? Thanks to social media, millions these days are daring to ask everything about "it". Jennifer Holleis has the details END_OF_DOCUMENT_TOKEN_TO_BE_REPLACED

While Bashar al-Assad is still shunned by the West, which blames him for a decade of brutal war in Syria, a shift is under way in the Middle East, where Arab allies of the United ... END_OF_DOCUMENT_TOKEN_TO_BE_REPLACED

Unauthorised immigration to Europe went down at the peak of the pandemic. As EU countries re-open, migrant flows are back up. What does it mean for the EU – and for migrants? By ... END_OF_DOCUMENT_TOKEN_TO_BE_REPLACED

Newly discovered aerial photographs taken by the German Luftwaffe show what a keen interest the Germans took in British-controlled Palestine during the Second World War. Not only ... END_OF_DOCUMENT_TOKEN_TO_BE_REPLACED

Religions are often a source of conflict. But the worldwide Religions for Peace movement seeks to change that by galvanising interreligious dialogue. Delegates from 90 countries ... END_OF_DOCUMENT_TOKEN_TO_BE_REPLACED

END_OF_DOCUMENT_TOKEN_TO_BE_REPLACED
Social media
and networks
Subscribe to our
newsletter