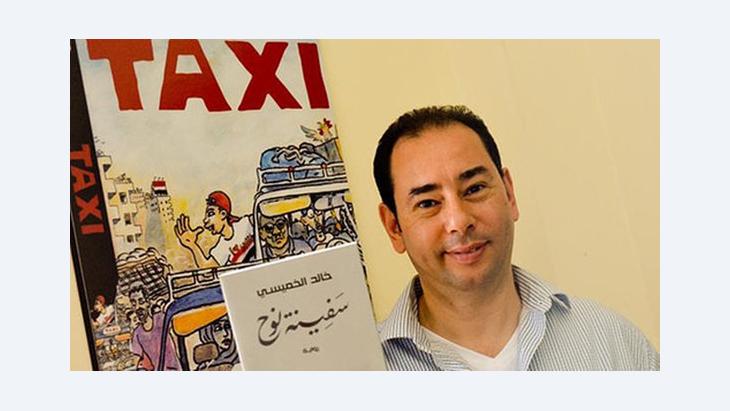 ﻿Best-selling author and journalist Khaled Alkhamissi is one of the sharpest observers of Egyptian society. In his novels Taxi and Noah's Ark he foretold the fall of the Mubarak regime. Bettina Kolb spoke to him about a revolution that is far from over

In your novel Noah's Ark, which was first published in Egypt in 2009 and is now available in German, you write about Egyptians who want to leave the country. It was obviously written before the revolution. What was your intention?

Khaled Alkhamissi: I wanted to express the end of a regime, the end of an era in Egypt. We smelled the stench of a dead body and it was horrifying. Noah's Ark is set in the time when a surge destroyed the foundations of Egypt. I wanted to describe the destruction.

When I wrote the book between 2006 and 2008, chaos ruled, and the storm was so powerful that we lost all sense of direction. We were like birds trying to fly in one direction and being carried away by the storm in another. So leaving Egypt in Noah's Ark was a symbol for not being able to continue as before.

The novel is a dialogue between the narrator and the characters, a mix of fiction and real political events.

Alkhamissi: It is a circle, a novel with a round structure; each character is describing in a simple way how much he wants to leave, how he can leave and why. But on a second level, they are describing the chaos in their minds. On a third level, it is about the dead body.

Do any of the opposition parties have programmes to solve the political, economical and social crisis in Egypt?

Alkhamissi: None of the opposition parties is very credible either. This is the main problem. They have programmes but they are not very credible. They need time to develop their tools and, most importantly, we need more time for a political power that can really address the demands of this revolutionary process to emerge.

How do intellectuals and artists contribute to the transformation process?

Alkhamissi: Through a lot of networking and demonstrations. I am part of a group of cultural figures that is working on a new cultural policy for the country right now. We will not rely on the Ministry of Culture any longer as it does not represent our demands.

How can the transformation process in Egypt be completed?

Alkhamissi: You simply have to forget the idea propagated by the media and European politicians, who are speaking about transformation from dictatorship to democracy. The Europeans and Americans finance a lot of organisations that are working towards transformation. We are not in the process of transformation from A to B, as representative democracy is dying everywhere. These were eighteenth-century ideas and these ideas are dead. In Egypt, we are not going to the eighteenth-century ideas that you are living by in Europe now.

What we need now is to properly analyse the revolutionary process that has been going on for almost ten years. Why is it still going on? After that, we need a manifesto of demands. Up until now, we have not written down our demands in a theoretical text, as was done in the French revolution, for example.

What is your outlook for Egypt?

Alkhamissi: We are living in a vibrant social era in Egypt. Everyone has the power to express themselves, to take to the streets and to ask new questions. Yes, it will take a long time, but I am very optimistic about this ongoing revolutionary process.

Welcome to the world of Al Qasar, where Arabic music collides head-on with punk and psychedelic to create something powerful and beautiful. "Who Are We" is a raucous, subversive ... END_OF_DOCUMENT_TOKEN_TO_BE_REPLACED

Egyptian authorities have Mada Masr in their sights once again after critical reporting. But the editor of the country's last independent news source is adamant they will continue ... END_OF_DOCUMENT_TOKEN_TO_BE_REPLACED

Like Christianity, Europe's history is one of migration. Both have strong roots in the Orient and in cultures thousands of years old. Cultural historian Bernhard Braun invites us ... END_OF_DOCUMENT_TOKEN_TO_BE_REPLACED

When she ascended the throne, millions of Muslims still lived under British rule. Later, Elizabeth II appealed for tolerance in a multi-religious society. She was the first ... END_OF_DOCUMENT_TOKEN_TO_BE_REPLACED

END_OF_DOCUMENT_TOKEN_TO_BE_REPLACED
Social media
and networks
Subscribe to our
newsletter