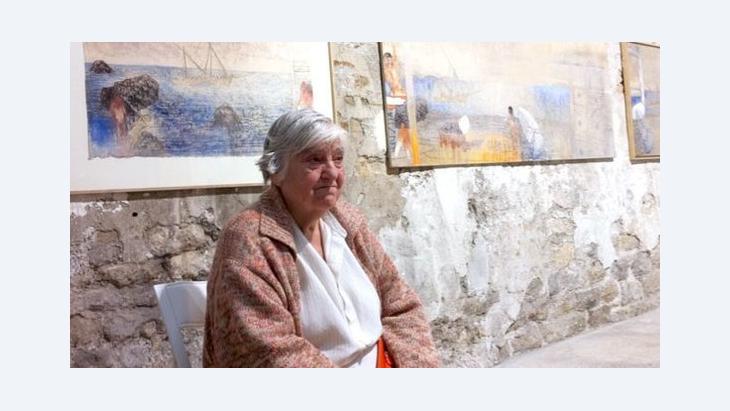 ﻿Etel Adnan, the grand dame of Middle Eastern literature, is the epitome of cosmopolitanism: throughout her life, she has oscillated between one country, one language, and one genre and another. dOCUMENTA (13) dedicated an entire retrospective to this exceptional poet, writer, and painter. Vera Kern travelled to Kassel to meet the 87-year-old

Etel Adnan: I wish it had happened 20 years earlier! It's funny because at the same time I sometimes think maybe it is good it didn't happen before, perhaps because I was not self-conscious enough for such an internationally renowned exhibition.

When you become successful, you're sometimes afraid that you are not that good any more. And it's a kind of consecration that your work is worth being accepted for such an international event. Of course, it's an artist's dream to be at dOCUMENTA. It is the biggest fair in the world and it's not commercial; it is very intellectual and artistic. So it's an honour to be here.

You also contributed a notebook you wrote specially for dOCUMENTA, On Love and the Cost We Are Not Willing to Pay, to the recently launched series "100 Notes, 100 Thoughts". What is the background to this book?

Etel Adnan: The artistic director of dOCUMENTA, Carolyn Cristov-Bakargiev, wanted me to write about my paintings. But I have already written on art. So she asked me – as if it was a private conversation – what interests you? And I said, what strikes me most is that in film and in books, we speak a lot about sex, violence and pornography, but we don't speak of love.

So I wrote about love with no self-censorship. And basically I meant that love is not only for people; it's an energy that is distributed differently. But the hardest love is love for a person; after all, objects obey to you. If you love painting, you are alone with your colour and canvas. But if you love a person, that person has also his own problems.

Some people feel attached to language. Language is also a kind of leitmotif running through your work.

Etel Adnan: My mother was a Greek from Turkey, from Smyrna, now Izmir. And my father was an officer of the Ottoman Empire, born in Damascus. They spoke Turkish with each other, and my mother spoke Greek to me. In Beirut I was surrounded by Arabic; at school we spoke French. But now my working language is English. 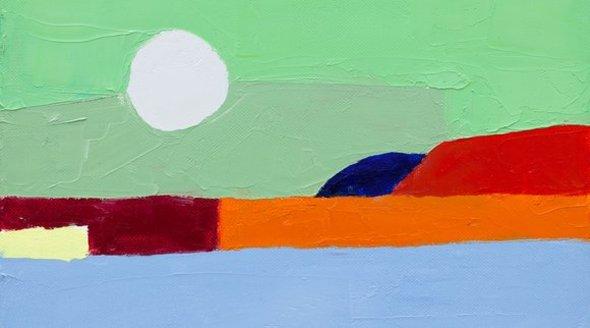 Art and political thought: Etel Adnan's works are all about a heightened perception of everyday situations, objects, emotions, places and people; the reference to what is happening right now always plays a key role

Of all these languages, which one would you consider to be most your own?

Etel Adnan: I don't think I have one, to be honest. Because it depends on what I am doing, in which country I am. I bought a little house in Greece, just to hear Greek, to think of my mother's language. When I write, I write mostly in English. And I like the English language because I went to America alone back then and I made myself. It is something that is solely mine; no family.

You have been commuting between languages and places for quite some time – Beirut, Paris, California. In view of your cosmopolitanism, do you feel like a global citizen?

Etel Adnan: I don't know. Global citizenship is coming. But everything you do has a price; it's good in one way. But I am afraid of this global citizenship. Look at art: it is more and more international. If they didn't tell you that I am from Lebanon and even California and you saw my paintings, would you know where they come from? Whatever we gain, we loose something else. And globalization is both good and dangerous.

How does your multicultural background influence your work?

Etel Adnan: When you have such a multicultural background – which is the way of the future – where is your identity? I often ask myself this question. Your identity is a mixture of things. It is your own memory of your background, your family and your own life. Yet in the end you choose how you want to live.

You once wrote "Beirut sticks to me like hot wax, even in slumber". After years of living in exile, do you still consider Beirut your home?

Etel Adnan: Beirut becomes my home when it has problems. It is not my only home. I have spent more time in California than in Beirut. I am pretty much American. And I grew up in French schools. But when I read in the newspaper – about the civil war in Lebanon, about the war in Syria – the politics do not allow us to forget.

To be honest, I feel alright in the world. There are certain places that I like best, but I cannot be in both places at the same time: northern California, near San Francisco, and Beirut. Those are my two true homes. And they are beautiful places. Beirut was beautiful. But now they have built urbanism without city planning. They are killing Beirut more than the war with those concrete buildings.

At ease in various cultures, places, languages, and forms of expression: Etel Adnan is equally at home working with prose, lyrics and paintings as with film

So you consider Beirut and Northern California your home. Is that also why you call yourself an Arab-American writer?

Etel Adnan: I do identify myself as an Arab-American artist. But I do not call myself an American-Arab artist. This is how it works in America. They say Black-American writers, Hispanic-American writers. It's a concept. But I accept that label. I do identify with it. Even though I also feel at home in Europe; Europe is very creative.

Crises have often triggered your creativity. Your work has been influenced by the Algerian War, the Vietnam War, the Lebanese War. How would you describe your art-making process?

Etel Adnan: I react to what is happening in the world or to the place where I am. I don't decide ahead of time what my subject is. I haven't decided about any of my works ahead of time. They always happen by chance.

With your Lebanese background, what is your perspective on the current events in the Arab world?

Etel Adnan: The Arab world has been in the hands of extremely corrupt authoritarian governments. They cannot just disappear; they are structures. Moreover, foreign nations supported them, so it is a double problem. Every country has a national problem, and superpowers have aspirations regarding their territories.

Take Syria, for example, it has had a corrupt government for 40 years and more. It was getting a bit better, but they refuse to reform. And China and Russia are helping the Syrian government, so the poor Syrian people, they can win against their government, but they cannot win easily against China and Russia. So these Arab countries are not free from their own government and not from the outside world. It's tragic.

When you look at what is happening there, do you have the perspective of an outsider?

Etel Adnan: No, I feel concerned. As I say, I am happy in America and I am happy in Europe. But when I see all these problems, I cannot detach my mind totally. I want to, but then the news and the history … it breaks my heart. For example, there was a beautiful revolution in Egypt, but the military doesn't want to go! We don't know what the Europeans are doing in secret; we don't know. Who is backing the military? We don't really know which country is backing it. So what can the people do? They did their best. So it breaks my heart!

Etel Adnan was born in Beirut in 1925 to a Greek Christian mother and a Muslim Syrian father. She studied philosophy in Paris, Harvard and Berkeley and taught ﻿philosophy in California. She now lives as an artist in Paris, Beirut, and in Sausalito, California.

The catastrophic human rights situation in Bahrain is being largely ignored by the rest of the world. Despite all the damning evidence, which includes a Human Rights Watch report ... END_OF_DOCUMENT_TOKEN_TO_BE_REPLACED

The many terrorist attacks France has faced over the last ten years have poisoned the political discourse, especially when it comes to migration. Since 2012 a relentless stream of ... END_OF_DOCUMENT_TOKEN_TO_BE_REPLACED

Etel Adnan, the artist who transcended the borders of culture and language, may have died in Paris, writes Lebanese author Elias Khoury, yet her death holds a mirror up to the ... END_OF_DOCUMENT_TOKEN_TO_BE_REPLACED

Shot, beaten to death or drowned: a demonstration by tens of thousands of Algerians ended in the "Paris Massacre" on 17 October 1961. Sixty years on, historians and victims' ... END_OF_DOCUMENT_TOKEN_TO_BE_REPLACED

Western states have fought against terrorism not only in Afghanistan, but also in Syria and Iraq – leaving behind people who were once their partners in fear and poverty. Hisham A ... END_OF_DOCUMENT_TOKEN_TO_BE_REPLACED

Newly discovered aerial photographs taken by the German Luftwaffe show what a keen interest the Germans took in British-controlled Palestine during the Second World War. Not only ... END_OF_DOCUMENT_TOKEN_TO_BE_REPLACED
Author:
Vera Kern
Date:
Mail:
Send via mail

END_OF_DOCUMENT_TOKEN_TO_BE_REPLACED
Social media
and networks
Subscribe to our
newsletter