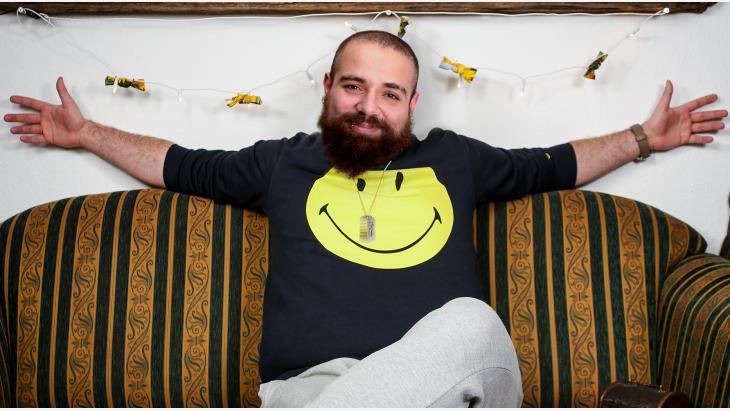 ″Being a refugee is not my dream job″

″Who are these Germans?″ That′s the question Firas Alshater asks on his YouTube channel Zukar. Ula Brunner interviewed the Berlin-based Syrian filmmaker and refugee on acceptance and on what home and humour mean to him

Mr. Alshater, since the beginning of 2016 you have been causing quite a stir on the social networks with your YouTube channel ″Zukar″. In the media, you are often referred to the  ″Refugee YouTuber″. How would you describe yourself?

Firas Alshater: I'm just someone who is trying to draw attention to problems – for both German society as a whole and for the refugees. I get feedback from people who like my videos, but also from right-wing extremists. As you can see, I reach a broad spectrum of viewers. Being a refugee in Germany however is not my dream job.

In your first video you introduce yourself with the words: ″In Syria I made films – but only when I was not in jail for making films.″ You have been in Germany since May 2013. Two very different lives – how do you deal with that?

Alshater: I decided from the outset that I – regardless of what German society is like – must accept the people so that they will accept me. I have to continue what I've been doing and do what I want to do. That's my right.

In this video, which made you famous overnight, you stood blindfolded on Alexanderplatz, next to a sign saying "I am a Syrian refugee. I trust you – do you trust me? Give me a hug!″ How did the idea come about?

Alshater: When, in the autumn of 2014, so many people were screaming ″Foreigners go home!" at the PEGIDA demonstrations in Dresden, I asked myself: are all Germans like that? To find out, I went to Alexanderplatz in Berlin and shot the video.

What conclusion did you come to?

Alshater: The Germans – that′s 80 million people and one big society. There′s no way, however, that you can say they are all like this or like that. And that's how it is with the refugees. They also come from large societies made up of diverse peoples. I have to accept people as they are and vice versa. That's what integration is all about. And that's the message I want to get across in my videos.

Your Web clips are professionally produced right down to the smallest detail. Who are the people behind them?

Alshater: The team consists of the producer and co-author, Jan Heilig, a cutter, a cameraman and me. We write the script together, exchange ideas and decide together what the best thing to do is. I shoot my videos in German, but I also post them in several languages – Afghan, Arabic, English – so that they can be understood by all my fans.

You tackle social debates and problems with a lot of wit and irony. After the aggressive attacks on refugees in Clausnitz in February 2016 you made the video ″Mein erster Fluchtling″ (My First Refugee) in which you touch upon people's fear of contact in the form of satire. How important is humour in your work?

Alshater: Humour is a good way of getting people to open their hearts. I'm trying to show with humour, how I, as a human being, as me Firas, deal with certain problems – and not as a refugee, nor as a Syrian.

Do you see yourself as a political comedian?

Alshater: It is not my job to be a politician or to talk about political issues. I'm just trying to get my message across with humour. It is important that we encounter each other without prejudice. People are just people, wherever they come from.

But isn't it prejudices that play a particularly important role in the social debate on the refugee issue?

Alshater: I don′t think the situation is actually as critical as people make out. The media, however, love to focus on problems. At the moment we rarely hear anything about people who help refugees, yet lots about right-wing extremists. We seem to forget that there are still many people who welcome refugees.

Following the attacks in Brussels in March 2016 you posted the video ″Brussel. Wir alle!″ (Brussels, us all!) on the Internet. Its message was ″Arabs in Germany! This is your new home.″ You, yourself, live in Berlin's Prenzlauer Berg district. What does ″home″ mean to you?

In 2015 almost 80,000 refugees came to Berlin alone, many of them from Syria. Are you a kind of helpline and point of contact for your compatriots?

Alshater: I have many contacts with refugees, especially with people who I knew in Syria. Many come to me with their questions, they ask me to help them, to translate something. Quite a lot of people now know me due to my YouTube work.

We naturally want to produce another series of ″Zukar″ clips, I have a place on the film editing course at the film school in Babelsberg and my first book will be published in the autumn. There are many ways for me to work, many doors are open. I just have to find out what suits me best.

Firas Alshater (born in 1991) grew up in Damascus, where he studied drama. He was co-organiser of the first demonstrations against the Assad regime and for a free Syria. As an activist and filmmaker, he documented the developments in his home country, he was also imprisoned and tortured. Firas Alshater has been granted asylum in Germany and has been living in Berlin since 2013.

Business in the Moroccan city of Tangiers is booming due to its location at the nexus of global trade routes. But many locals are failing to reap the benefits. What they crave ... END_OF_DOCUMENT_TOKEN_TO_BE_REPLACED

Morocco and the European Union are at cross purposes when it comes to the Western Sahara. And, as Germany does not support Moroccan claims to the territory, a major conflict has ... END_OF_DOCUMENT_TOKEN_TO_BE_REPLACED

Jewish voices are much more diverse than the public often sees. Jewish men and women who oppose the injustice of Israeli occupation in the West Bank deserve our respect and ... END_OF_DOCUMENT_TOKEN_TO_BE_REPLACED

They’ve already got the Louvre; they’ll soon have a Guggenheim Museum as well – and now the Emirates have added literature to their quest for cultural supremacy in the Arab world ... END_OF_DOCUMENT_TOKEN_TO_BE_REPLACED

The Germans have a fragmented perception of the conflict between Israel and the Palestinians, and their discourse is dominated by certain catchphrases. All the while, there is a ... END_OF_DOCUMENT_TOKEN_TO_BE_REPLACED

An unusual organisation brings Jews and Muslims together to fight hate and promote dialogue. In the small central German city of Marburg they have been jointly calling for an end ... END_OF_DOCUMENT_TOKEN_TO_BE_REPLACED
Author:
Ula Brunner
Date:
Mail:
Send via mail

END_OF_DOCUMENT_TOKEN_TO_BE_REPLACED
Social media
and networks
Subscribe to our
newsletter