Skip to main content
Interview with Fuad Rifka, Winner of the Goethe Medal

A Life Dedicated to the German Language

In recognition of his numerous renderings of German language poetry into Arabic, the Lebanese poet, philosopher, and translator Fuad Rifka has been awarded with the Goethe Medal, an official medal of honour of the Federal Republic of Germany. Rainer Traube interviews Fuad Rifka 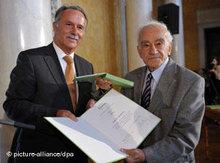 "For me Goethe is a cosmic figure," Fuad Rifka says

​​Fuad Rifka – translator, poet, writer, and philosopher. You are one of the most important cultural emissaries between Germany and the Arab world, and are now the recipient of the Goethe Medal. What does it mean for you today, now that you are eighty years old?

Fuad Rifka: Goethe remains a puzzle for me. Why? The fact that someone is a philosopher poses no problem. Being a poet, that I can understand, too. And also being a lawyer is something I can fathom, equally so, someone choosing to pursue scientific interests. All these things I can grasp quite well. But that all these different forms of existence can be united in one person and that these forms of existence feel "at home" in this individual is something that I regard as remarkable. In other words, for me Goethe is a cosmic figure, all-encompassing and all-embracing.

Goethe is very close to me, in every respect. But he is the most difficult to comprehend. And while this is so, I regard myself as very lucky to have received his medal. It is truly a heavenly gift, a holy blessing. This medal has, in a sense, saved my life. It is the crowning achievement of my life on this earth.

These are grand words and they also express a large dose of gratitude to Goethe on your part. Your work translating German poetry into Arabic has been a truly pioneering effort. Yet, many experts say that it is impossible – the languages are far too different and that German has a completely different logic than Arabic. Shouldn't you have been unemployed if this were the case? 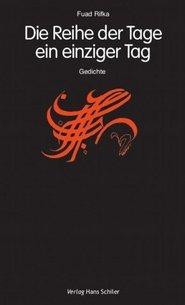 "A translation is the interpretation of an interpretation": Cover of Fuad Rifka's collection of poetry Die Reihe der Tage ein einziger Tag (The series of days a single day)

​​Fuad Rifka: This is exactly what I experienced. When you can't reach the moon, it is also wonderful to see the moon from a distance. When you can't reach the stars, then it is also beautiful to catch sight of the stars from afar. Even when the translation of a poem can't be perfect, it is still nice to have a sense of what it conveys. That is better than nothing. The question is what is better for humanity, for bridging the gap between cultures? Is it better to have a translation that isn't exactly precise or not to have any translation at all? I have chosen the first option.

That means that you can't really translate – word for word – but only interpret a work, offering a loose re-wording?

Fuad Rifka: Every translation is an interpretation. And it poses certain difficulties, for example, when the translator of poetry is a poet himself. Another issue is to what extent the translator is comfortable with the language of the text. There is another extremely serious difficulty, namely, being able to correctly understand a poem. Many a time, I have called up poets I've been translating and asked, "Excuse me, what does this verse means?" The answer I get is "Mr Rifka, you have to decide for yourself what I meant. I can't say anything more. The experience has past and I can never again relive it. You must decide for yourself." 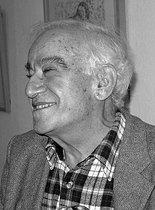 Fuad Rifka, one of the most important cultural emissaries between Germany and the Arab world

​​This means that a translation is the interpretation of an interpretation. It is thereby two steps away from the original. We have to recognise this problem. But what can you do? Should we simply say, "Let's stop translating?" Or should we continue translating and build bridges between cultures?

You say building bridges between cultures. As a Lebanese, as an Arab, you have always emphasized with and felt an emotional bond to German culture. Now, at eighty, where does your heart lie – with German or Arab culture? Are you divided, or are you, as you once remarked, more at home in German culture than in Arab culture? Where do you stand?

Fuad Rifka: Every culture has its own identity. But that shouldn't mean that no communication exists between them. Poetry provides an excellent bridge. A poem has absolutely no practical purpose. The bridge that permanently remains between cultures is established via thought and poetry. I have devoted my entire life to German literature. And I am truly happy that I learned the German language and thereby had direct contact with the foundation of German culture. It has been a joy – perhaps more than I have deserved.

In his laudation, Stefan Weidner, also a renowned translator and author, said that your belief in the word has made you into an original Arab poet. Is this still the case? Do you continue to believe in the word and the power of language?

Fuad Rifka: I do, in the sense that we highly value language in our poetry. We very much rely on what one refers to as rhetoric. The language of a poem plays an important role. Which word and what expression the poet requires is very important. For us, language remains our focal point, especially in the world of poetry.

Fuad Rifka was born in Syria in 1930. He grew up Lebanon and studied in Beirut. He cofounded the avant-garde literary magazine SHI'R. He was awarded a doctorate in Tübingen for his work on the aesthetics of Heidegger and has taught Philosophy at the Lebanese American University Beirut since 1966. He has translated Hölderlin, Rilke, Trakl, Novalis, and Goethe. Rifka was awarded the Friedrich Gundolf Prize by the German Academy for Language and Poetry in autumn 2001. One year later, he was elected a member of the Academy.

Interview with Fuad Rifka
At Home in German Thought
The Syro-Lebanese poet and thinker Fuad Rifka is currently working on a new bilingual anthology of German poetry in Berlin. Youssef Hijazi spoke to him about his love of German culture and about the difficulties of translation