Another factor was the arrival in the city of people from the countryside, which did not go down well with the people of Tangier. The country folk did not know how to adapt to life in the city, moreover they brought with them their customs, their cattle and their sheep. This led to a change in the cultural structure of Tangier and in the lifestyle of its people. During the attempts to subdue the region following independence, Tangier experienced a degree of marginalisation. There was no way forward economically other than by smuggling. This made a lot of people feel like outsiders in their own city.

Over the course of your studies, you met many indigenous people of Tangier who expressed discontent at the policy of "Moroccanisation". They stressed that Tangier was not a colony, but an international city and that "Moroccanisation" had obscured its cosmopolitan heritage. What do you make of this?

Haller: As regards the Muslim working class – and this is about them – quality of life was better when Tangier was an international city than it is now. For instance, they used to have the option of being treated in Jewish or Italian hospitals, or to have their children taught in Italian schools. Today, in contrast, people are always complaining about the quality of health and education. Of course, things were not perfect in the past, because Muslims have always had fewer opportunities than their Jewish and European neighbours. 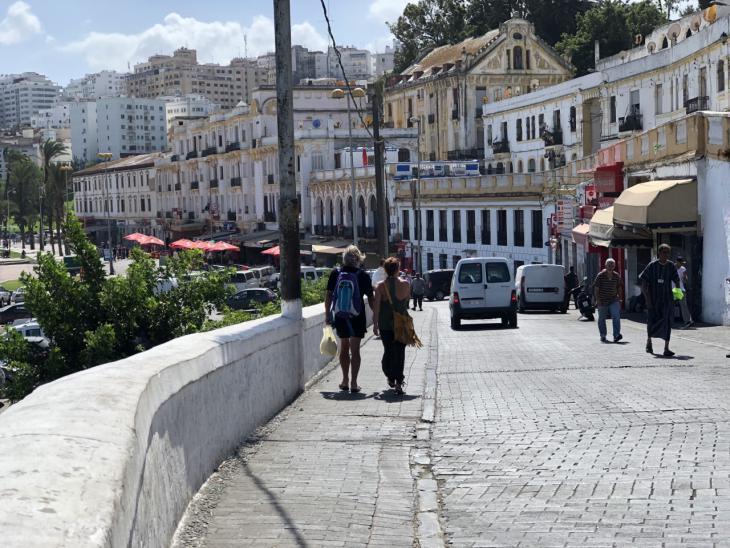 Itʹs not all progress: quality of life for the Muslim working class was better when Tangier was an international city. Back then, they used to have the option of being treated in Jewish or Italian hospitals, or to have their children taught in Italian schools. Today, by contrast, people are always complaining about the quality of health and education

Aside from the book, as a German who lived in Tangier for over a year, how do you rate the quality of life in Morocco from the point of view of freedom – personal freedom, human rights and the status of women?

Haller: Thatʹs a difficult question, because there are two sides to the issue. On the one hand, there are increasing numbers of people who speak about and demand individual freedoms through young peopleʹs music, social networking sites and so forth. They are expressing their desire for freedom more than ever. On the other hand, society is becoming increasingly conservative, with a monarch who is both contemporary and traditional at the same time.

It is extremely complicated. Morocco is a mix of people, encompassing those who defend freedoms and womenʹs rights and others who are conservatives, not to mention the official rhetoric of the state. Tangier, a case in point, used to be cosmopolitan, but it has quickly turned into a conservative city, underlining the huge difference between it and other Moroccan cities. The transformation in this respect was much greater than elsewhere. Women in Tangier used to enjoy greater freedom and homosexuals were more able to express themselves openly.

This is not only a consequence of Wahhabist Islam coming from Saudi Arabia, which has infiltrated peopleʹs minds and changed their ways of living; it is also due to the economy and the transition from a conventional and traditional society to a consumer one. Indeed, the latter has done more to make the society conservative. In my encounters with older Tangier residents, many of them said that freedom of speech has long been empty rhetoric. Hence my conclusion that the freedom experienced during the cosmopolitan era was limited to the higher social classes, most notably the Jews and the Europeans.

Recep Tayyip Erdogan, disappointed by the European Union’s reluctance to integrate Turkey into its ranks, has re-directed his country’s diplomacy toward the Maghreb and Africa to ... END_OF_DOCUMENT_TOKEN_TO_BE_REPLACED

Using a graphic novel to address a contentious issue like the Algerian war of independence may seem an odd choice, but new release "Algeriennes", translated into English by Ivanka ... END_OF_DOCUMENT_TOKEN_TO_BE_REPLACED

Although a unity government was formed in Libya in March 2021, tensions and possible crises between the political actors are already emerging. What problems does the country face ... END_OF_DOCUMENT_TOKEN_TO_BE_REPLACED

In Islamic mysticism, Ramadan is more than just a period of prescribed abstinence, signifying an opportunity for inner contemplation. Marian Brehmer explores the spiritual ... END_OF_DOCUMENT_TOKEN_TO_BE_REPLACED

Liberal Islam: everything revolves around the Koran. In the search for a liberal interpretation, peculiar constructs occasionally emerge. By Alexander Flores END_OF_DOCUMENT_TOKEN_TO_BE_REPLACED

EU parliamentarian Dietmar Koester criticises the Union's failure to speak up when faced with human rights abuses committed by its Middle Eastern allies, while pointing out that ... END_OF_DOCUMENT_TOKEN_TO_BE_REPLACED
Author:
Karima Ahdad
Date:
Mail:
Send via mail

END_OF_DOCUMENT_TOKEN_TO_BE_REPLACED
Social media
and networks
Subscribe to our
newsletter