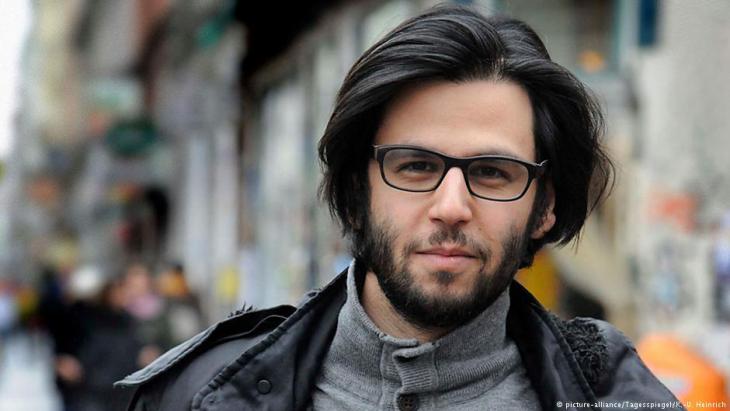 The German-speaking author Deniz Utlu writes about migration and identity in a way that is at once to the point and poetical. In interview with Canan Topcu, he explains why his Turkish roots seem more important to others than they do to him and how he himself defines his identity

Mr Utlu, in May you travelled to Peru on a reading tour. Did your ethnicity play any role there?

Deniz Utlu: For its Europe Weeks, the theme of which was migration, the Goethe-Institut had invited me to give readings in Lima and Arequipa. I was introduced there – quite correctly – as a German-speaking author. The primarily young audience showed considerable interest. Time and time again, I am surprised by the way in which literature is able to connect people from very different contexts and in some cases times.

Do you define yourself as Turkish or German?

Utlu: As a person who is affiliated to more than one cultural group, the binary matter of national identity has nothing to do with me myself. In my view, it is above all the social majority that is interested in this question. However, there are without doubt also people of migrant affiliations who have internalised this sense of uncertainty that has been conveyed to them by others – and likewise make a big issue out of it.

… and there are those who are annoyed when asked about their origins. How do you react?

Utlu: It does not annoy me, as I see it mainly as an expression of the helplessness of the social majority. It is a desperate attempt to find the essence of identity. When I am asked what I am and whether I feel Turkish or German, I try to remain friendly. When politicians seek to establish an essential definition of what German means and what constitutes German culture, this sense of helplessness not infrequently becomes ridiculous – and it becomes quite clear that it is impossible to maintain the binary nature of the phenomenon.

Apropos “German culture”: what role did culture play in your socialisation and integration? After all, as a 19-year-old in Hanover you founded and were the long-term editor of a magazine for culture and society – freitext.

Utlu: Many of the teachers at my secondary school belonged to the 1968 generation, as were the parents of the pupils. In my year, only two out of the one hundred pupils were of Turkish origin, as I was. The situation in Berlin′s Kreuzberg and Neukolln districts is quite different today. There was a very strong culture of debate at my school and one that was very open to the arts. We had a drama club that was very important to me. What is more, I was lucky enough to have teachers who encouraged me – that was not at all the case at my primary school, or when I first started secondary. I am still close friends with one of my teachers to this day.

And back then you were already  acquiring some initial experience as an author.

Utlu: Yes, I would write even as a child. And when I was around 15 and wrote two articles in the school newspaper – of which I was the editor – to protest against the head teacher, I discovered that writing can actually have an impact. An article entitled Was ist links? (i.e. What is left?), perhaps my first essay, prompted considerable discussion and was addressed during lesson time. There were even events staged as a result, because pupils – particularly those in higher years – felt the need to engage with the issue. I hadn′t expected any reaction whatsoever.

Meanwhile you are at work on your second novel. What role does migration play in it?

Utlu: Migration provides a context for my first novel, but is not its theme. On the other hand, one should not ignore a possible migrant context simply to ensure that other facets of the text become visible. I do not believe that migration can be omitted from contemporary literature nowadays – regardless of whether it has any biographical relevance to the author in question. We can no longer pretend this phenomenon does not exist.

However, this phenomenon is not reflected in the presence of literary and cultural figures of migrant background. Do these groups perhaps need to be particularly promoted?

Utlu: What holds for business or politics, must also apply to culture: steps must be taken to ensure that people of migrant affiliation become integrated in that particular group as a matter of course. The world of culture needs to ensure that people of multiple identity are taken seriously in their artistic and literary work and that they are not merely reduced to their ethnicity.

Born in Hanover in 1983, Deniz Utlu studied economics in Berlin and Paris. These days he works as a freelance writer in Berlin. In early 2014, Utlu published his first novel, ′Die Ungehaltenen′. The following year, a play based on the book premiered in Berlin′s Maxim Gorki Theatre .

Home
Print
Newsletter
More on this topic
Post-migrant literature in Germany: ''The time has come to speak out very, very loudly''Germany and the semantics of exclusion: "We are not burka"The refugee debate: What makes us German?Daughters and Sons of Gastarbeiters writers′ collective: "When I go to Germany, I will buy a red tractor"
Related Topics
Integration in Germany, Literature, Migration, Migration in Germany
All Topics

Giessen, Eichsfeld, Kusel, Berlin – cars bearing old German number plates are the latest trend on the streets of Cairo. Many Egyptians regard the discarded plates as chic. What ... END_OF_DOCUMENT_TOKEN_TO_BE_REPLACED

Tunisia has been going through a severe economic and political crisis in recent years. More than one in three young people there are unemployed. For many skilled, qualified and ... END_OF_DOCUMENT_TOKEN_TO_BE_REPLACED

German imams have publicly expressed their solidarity with the women of Afghanistan. In a letter of protest, the clerics say that the Taliban regime's decree barring women from ... END_OF_DOCUMENT_TOKEN_TO_BE_REPLACED

At the end of every year, the team at Qantara.de gives you a run-down of the ten most-read articles on the site over the past 12 months. Here is a quick overview of the stories ... END_OF_DOCUMENT_TOKEN_TO_BE_REPLACED

Social engagement is often motivated by religious factors. A new book explores the background to these community efforts and appraises how effective they are in helping to ... END_OF_DOCUMENT_TOKEN_TO_BE_REPLACED

The government in the Netherlands, one of the last European nations to abolish slavery, has made an historic apology. But some feel that there is still a long way to go. By Ella ... END_OF_DOCUMENT_TOKEN_TO_BE_REPLACED
Author:
Canan Topçu
Date:
Mail:
Send via mail

END_OF_DOCUMENT_TOKEN_TO_BE_REPLACED
Social media
and networks
Subscribe to our
newsletter