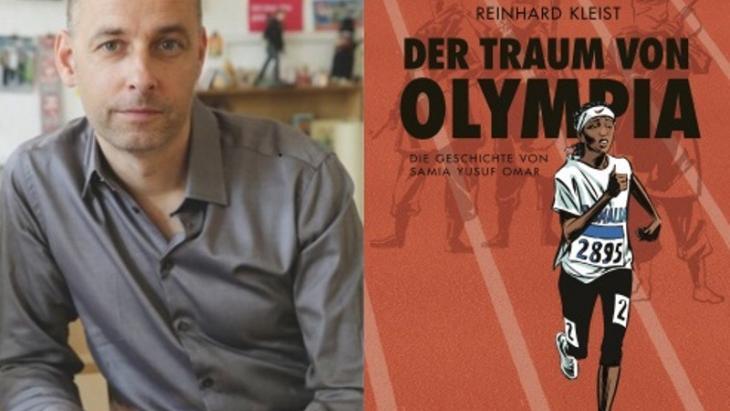 Reinhard Kleist is regarded as one of Germany’s finest graphic-novel illustrators and has travelled the Arab world extensively, discovering a fascinating local comics scene

Mr. Kleist, your volume "The Dream of Olympia" was published in Arabic translation by Cairo publishers Sefsafa in 2017. In which Arab countries did you have the opportunity to meet and talk to people in the comics scene?

Reinhard Kleist: Mostly in Egypt, Jordan, Algeria and Sudan. I conducted workshops there and talked a lot with local illustrators about the hurdles they face in getting published. Actually very few of them can make a living off illustrating. Many work in advertising or in game and web design. I was very pleased to see that there are many similarities in terms of what people want and what they think is good. All over the world.

In Algeria there’s an annual comics festival. They even have cosplay competitions there and I saw young Algerians in Naruto running around in costumes, just like they do here. In Sudan there’s a group of young artists publishing a comics magazine in spite of very difficult circumstances. It’s called Kanon and is a real publishing feat, considering that there's basically no culture of books in Sudan and no decent printing presses. But they don’t give up. I admire that tremendously.

What differences and similarities do you see between the European and Arab comics scene?

Kleist: Despite being extremely focused on political topics, the treatment of them is often very oblique. I think they tend to censor themselves due to the very real threat of censorship. But just as often I encountered the desire to flee from daily life – escapist stories designed to make you forget the harsh reality around you. A girl in Sudan showed me her manga-style comics with love stories between people who looked Asian and even had Asian names. I asked her where she herself figured into these stories and she didn’t understand.

It’s very hard to reach your audience, of course. There are not few shops and young people often don’t have the money to buy comics. It’s really a very young audience. In Europe the readers of comics have become much older than they used to be, which has to do with the growing popularity of the graphic novel. In the Arab countries I’ve been to, comics tend to be part of youth culture and are very oriented towards the Asian market.

Did any encounters leave a particularly strong impression on you?

Kleist: In a workshop in Amman, I assigned the topic "incidents from daily life" and had a female student who illustrated a short story. It was about the Friday street protests that were taking place there at the time. On the sidelines you saw a protester and a policeman, standing across from each other at a demonstration. Then you followed them home and it turned out they both lived in the same building, entered the very same room and went to sleep there – one of them next to his protest sign, the other next to his truncheon. They were brothers. This story said a lot about the rift in society, but also about how young people can’t afford their own apartments.

How did you stumble upon the story of Samia Yusuf Omar ("The Dream of Olympia")? How did you develop the aesthetics of this book?

Kleist: I discovered the story while researching the situation of refugees from Africa during a one-month artist-in-residence programme in Palermo, sponsored by the Goethe-Institut. I was immediately captivated by its emotional power. Only after my stay in Palermo was I able to begin working on it. I talked a lot to refugees from Africa who told me their stories. I also talked to Samia’s sister, who lives in Helsinki. She told me a lot about their family life and Samia as an individual.

As far as the drawing technique goes, I decided on a very clear and simple style, enough to convey the plot, but restrained artistically. I wanted to focus completely on the story and its protagonists.

How did people react to the book?

Kleist: I did some great events with the book after it was published, especially with school children. I was afraid that, as a forty-something white European male, I wouldn’t find the right tone for the story of a girl from Somalia. But my fears turned out to be unfounded.

In Sudan I had a very special evening at the Goethe-Institut in Khartoum and reactions to the book were wonderful. There was a book presentation on the rooftop terrace and a live drawing concert with Sudanese musicians. One of the singers had written a song for Samia specially for that occasion. Everyone in the audience was moved to tears. The happiest thing for me, though, is that Samia’s sister loves the book. She was very pleased when I told her about the Arabic edition, to know that Samia’s story is still being told.

EU parliamentarian Dietmar Koester criticises the Union's failure to speak up when faced with human rights abuses committed by its Middle Eastern allies, while pointing out that ... END_OF_DOCUMENT_TOKEN_TO_BE_REPLACED

Ten years after Egypt's January 25 revolution, many of those who led protests are either disillusioned or in jail. ... END_OF_DOCUMENT_TOKEN_TO_BE_REPLACED

Egypt has never been called to account for the murder of Giulio Regeni, nor for the numerous human rights violations committed by the Sisi regime. Focusing only on stability, ... END_OF_DOCUMENT_TOKEN_TO_BE_REPLACED

Ten years after the Tahrir square protests in Cairo, Egypt’s human rights record is disastrous. On the occasion of the anniversary of the 2011 revolution, several international ... END_OF_DOCUMENT_TOKEN_TO_BE_REPLACED
Date:
Mail:
Send via mail

END_OF_DOCUMENT_TOKEN_TO_BE_REPLACED
Social media
and networks
Subscribe to our
newsletter