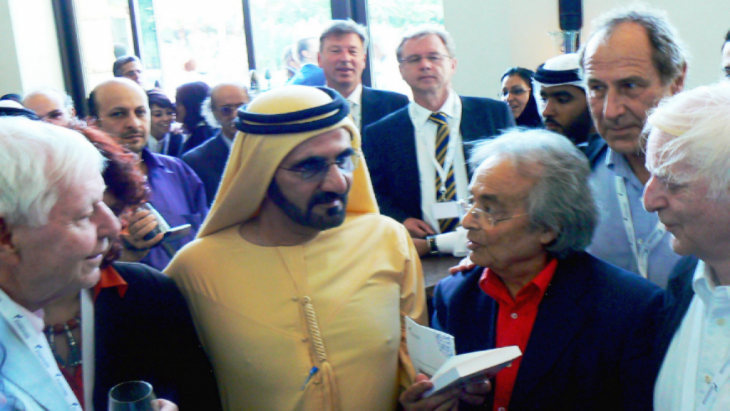 At the invitation of Sheikh Al Maktoum, the ruler of Dubai, a number of eminent German and Arab intellectuals recently met for a "cultural dialogue". Hans Magnus Enzensberger was among their number, addressing in his speech the question of whether the Arab world needs a new Enlightenment. Loay Mudhoon spoke to the author

​​Here in Dubai, we are witnessing the realisation of a gigantic modernisation project – albeit without the adoption of "western values" such as democracy and the rule of law. Can this experiment succeed in the long run? And should we be content with this purely technical or administrative modernisation from above?

Hans Magnus Enzensberger: As we can see, the Gulf region is going through a breathtaking modernisation project without equal, particularly in Dubai. This accelerated, primarily economic modernisation is being pushed by the rulers; and without doubt it is bringing more openness and a great deal of momentum into the countries at question, which certainly plays a role in the onset of modern values in the region, however slow that may be. In the case of Dubai and its ruler, Sheikh Mohamed bin Rashid Al Maktoum, we are looking at a kind of "enlightened autocracy" in my opinion. So it is more than mere technical modernisation.

In your opening address, you emphasised that Europeans claiming the Enlightenment for themselves could only be a half-truth. What do you mean precisely by that?

Enzensberger: As we can tell by the different names for enlightenment, it is a very complex phenomenon with varying nuances and parameters, depending on the country and the language. Enlightenment is a work of humankind; it has its own inherent contradictions and paradoxes. In my opening speech, I wanted to make people aware that the Europeans possess no kind of copyright on enlightenment, even though many in the West cite the Greeks as a historical model. The numerous attempts by many Europeans to claim the Enlightenment for themselves are at best half-truths, in actual fact.

​​I wanted to remind the audience that what the "West" tends to forget is the fact that Islamic civilisation in Arab Andalusia was at its height many centuries before David Hume and John Locke, Diderot and Immanuel Kant wrote their epochal works. For two centuries, Arab Andalusia was an incomparable centre of philosophical and scientific scholarship. Muslims, Jews and Christians held critical debates there on all sorts of issues, without fear of religious controversy.

The Aristotelian tradition would probably have died out without their work. Dante and Nikolaus Cusanus, Giordano Bruno and Spinoza owe their Islamic teachers just as much as do modern astronomy, logic, optics, mathematics, medicine and not least poetry. As we all know, though, this heyday was not to last.

That prompts the question of whether the currently rather sorry figure of Islamic culture calls for a new Enlightenment in the European sense?

Enzensberger: Regarding the deficits in the Islamic and Arab region, we are dealing with bitter truths, particularly in the education sector. The number of translations into Arabic is the perfect illustration: from the time of Kalif Al-Mamun until recently, over a period of twelve hundred years, far too few books were translated into Arabic – only the same number of translations as appear in a single year in modern-day Spain. In view of this obvious plight, the question of whether the Arab or even the Islamic world as a whole needs a new Enlightenment is definitely key. But an outsider cannot possibly answer that question – it is up to the Arab intellectuals, writers and artists to decide. To my mind, every cultural region should find its own way into modern life. This diversity of routes to modernity would enrich human civilisation as a whole.

At the "German-Arab dialogue forum" in Dubai, the Swiss writer Adolf Muschg emphasised the role of culture in international relations, above all as an instrument for rapprochement and mutual understanding, as he explained that culture holds "revolutionary potential". Do you agree?

Enzensberger:The fact that respected German and Arab writers and opinion-makers are meeting here for an "Arab-German cultural dialogue" and talking with unusual openness about what we have in common – and also about differing positions – shows that people in the cultural sector can actually get things moving, beyond the realms of politics and business. We can learn a lot from each other in these encounters, and unmask over-simplified dualisms and distortions. German authors are meeting important Arab authors here, and finding out, for example, from the Moroccan writer Mohammed Abed al-Jabri how difficult it is in most Arab countries to tackle critical subjects in public in a controversial way, as the traditions and the national interests forbid it.

What do you think of the effect of cultural exchange for peace, as a vision of a peaceful global knowledge society?

Enzensberger: That question is highly relevant at present, and I certainly wouldn't dare to give a definitive answer. But there is one thing I can say with certainty: meetings of this type can promote mutual understanding – and thus shape a peaceful coexistence. When it comes to cultural dialogue, allow me to point out one fact: every culture will die of thirst in the long run if it isolates itself and renounces the free exchange of ideas.

Hans Magnus Enzensberger was born in Kaufbeuren in 1929. He studied German literature and philosophy and worked as an editor in radio and publishing. He spent some years living in Norway and then Berlin, and has been based in Munich since 1980. Enzensberger's work, particularly as a poet and essayist, has had a profound influence on German literature since the 1960s. He has also played a key role in German publishing. In 1965 he founded the magazine Kursbuch (which he edited until 1975), in 1980 the magazine TransAtlantik (editor until 1982), and he published the book series Die Andere Bibliothek (Eichborn Verlag) from 1985 to 2004.

Since Ali Khamenei, Iran's most powerful man, has openly and unconditionally come out in support of Putin's war in Ukraine, logistical help is on its way, with an allegedly ... END_OF_DOCUMENT_TOKEN_TO_BE_REPLACED

Tourists have been returning to Tunisia, Egypt and Morocco. But, given the global uncertainty caused by the Ukraine war, will the comeback be enough to save a struggling sector, ... END_OF_DOCUMENT_TOKEN_TO_BE_REPLACED

The highly controversial Indian blockbuster "The Kashmir Files“, on the exodus of Kashmiri Hindus in the 1990s, is characterised by unilateral representations, negative ... END_OF_DOCUMENT_TOKEN_TO_BE_REPLACED

"Flugt" is the world's first museum dedicated to the stories of those forced to flee. The new museum, which focuses on the fates of refugees then and now, is housed in a former ... END_OF_DOCUMENT_TOKEN_TO_BE_REPLACED

"Finding Home", the second album by Syrian-born, UK-based musician Maya Youssef, works through feelings of loss and destruction until its music reaches a place beyond war and ... END_OF_DOCUMENT_TOKEN_TO_BE_REPLACED
Author:
Loay Mudhoon
Date:
Mail:
Send via mail

END_OF_DOCUMENT_TOKEN_TO_BE_REPLACED
Social media
and networks
Subscribe to our
newsletter