Interview with Hasan Ali Toptaş
"I Try to Expand Life, One Word at a Time"

In 2006 Turkish novelist Hasan Ali Toptaş was chosen to receive the most respected literary award in Turkey, the Orhan Kemal Prize. Fatma Sagir spoke to him about his twin careers as novelist and as court bailiff 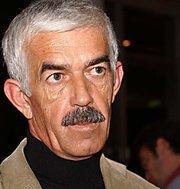 In Toptaş's novel The Shadowless, "existentialism moves out to the country"

​​Did you ever think your books would be read in other countries?

Hasan Ali Toptaş: No, and I never thought the novel "The Shadowless" would be translated into German. I financed the publication of my first books myself.

Then in 2006 something happened I could only have dreamed of. I had once written some poetic texts, which appeared much later under the title "Solitudes". These writings were translated into Flemish and re-written into a one act play.

The play was performed for several months this year in Amsterdam, Rotterdam and The Hague. Now a performance in Turkey is planned. I could never have imagined all this.

Do you write for yourself or for the reader?

Toptaş: Not for myself; I don't think you could put it like that. Obviously I only write in the first place because I like writing. My ideal reader would be myself. When I write I'm not wondering what might please today's readers. I believe we write not on paper, but on time. I certainly write for the readers, but not because of them.

In Turkey I achieved fame very late. Obviously novelists are just human beings; they have their weaknesses too, and even novelists like to have their egos massaged. I have written five novels and each has been awarded a prize; one actually received two. But that's enough now; it's almost too much. Too much applause makes your pen quake, it can steer your pen in the wrong direction.

How did your twin careers as court bailiff and as novelist influence you? Wasn't it a schizophrenic life?

Toptaş: Yes it was, basically. Daytimes working for the government, with people cursing and swearing at you: you call on people at supper time on behalf of the state and take the TV from a child who is watching cartoons on it. My life was split into thousands of pieces during the day, and I felt sullied.

But I couldn't give up working; there was nothing else to do and I have to earn my living. Back home I would get up again in the middle of the night, after a couple of hours' sleep and write until the morning. While I was writing "The Shadowless" we lived in a house heated by coal stoves. When I got up in the night I put on my winter coat, made myself a cup of tea and wrote the novel at the kitchen table.

On the one hand I'm a writer, on the other a bailiff. That leaves you with very mixed feelings. Has my existence as a bailiff influenced me as a novelist? I have never written about the things I experienced during this work. But it is certainly possible that my writing has been influenced by it. At that time I came to hate life more and more. I wanted to escape into the world of words. That was one influence it certainly had.

The novel "The Shadowless" takes place in a village. Why did you choose this setting?

Toptaş: First of all, I'm from the country myself. I know the village milieu and its realities. Maybe my subconscious caused the novel to be set in a village.

Secondly there is a genre within Turkish literature we call "Village Literature". Many novels have been written in this tradition, such that a particular model has developed.

At one end there is the village leader or mayor representing the state, then the imam or hodja representing religion, and at the other end comes the teacher as representative of the movement towards enlightenment following the founding of the republic.

When the novel "The Shadowless" appeared in 1995 in Turkey, someone wrote: "why is there no teacher in this village?" Very simple: I wanted to break the mould of Village Literature with this novel.

Also classic Village Literature is mostly about economic problems, about poverty and repression. Such problems are not dealt with in "The Shadowless". The subject of my novel is existence and non-existence. Existentialism moves out to the country.

To put it a little more abstractly, in my opinion it is not so important where a novel is set, or which characters appear in it. Whether the location is a city or a village is unimportant. For me there are no village or city novels.

A novel is a novel. Human things should happen in it; it should question humanity; it should reflect human existence. It should also ask questions of people; not deliver solutions and answers.

Although typical village scenarios occur in the novel, this village seems more a mirror to our times. The events described seem like typical village stories only at first glance; then they start to pose existential human questions. Normally we expect such questions in a novel set in a city.

Toptaş: That is exactly the way the novel "The Shadowless"differs from a Village Novel: the existentialism, the fact that such a thought can occur at all in the intellectual life of the rural population.

Existential issues really are something which city-dwellers more typically think about. But I believe that there was existentialism before Jean Paul Sartre, and earlier still. Perhaps it was not labelled as such, or the philosophy was not yet formulated, but it existed.

Obviously the question "who am I?" cropped up as soon as the first human began to think.

The characters in the novels live in a variety of worlds, which blur the boundaries between dream and reality. In Turkey there is a life between country and city; many people commute, and experience culture shock. Could it be said that the novel is about the difficulties and contradictions which come with life in between these two worlds, modern and traditional?

Toptaş: Every text tells something different from what the author intended. If you understood it this way, that's good. I'm pleased that the text is open to various interpretations. When I wrote the novel, I hadn't thought of your interpretation at all. It's only now you say this that I think about it. Yes, it does seem as if the text alludes to this conflict.

Is language more an instrument in your texts or is it also a protagonist?

Toptaş: At school they told me language was an instrument, a means of transport for us to convey our thoughts. I learned much later that this was not the case. Language is basically our soul, our being. It is not an instrument. Language is thought itself.

It was years before I recognized this. To write a sentence for me is to write a composition. I take care how many words end with open syllables and how many with closed syllables, whether all the words with hard consonants are bunched up at one end of the sentence, whether the distribution is right.

Even when a sentence is correct according to all the rules of grammar, sometimes you identify an imbalance in the sentence's sound when you test it acoustically. It's as if you have to place another word or syllable on the other side of the scales to restore the equilibrium.

I think it is like writing a song, because the letters determine the sound. Language is also a goal; in this sense too language is a protagonist in my novels.

In my eyes the hero of a novel is the text itself. It sometimes says more than the author himself has invested in it. When that is the case, it is a wonderful text. I can remember something Milan Kundera said: "Writers who think they are cleverer than their novels should change jobs." I love this sentence.

You said you felt as is you were sullied by particular events, while you were still working as a bailiff. Have you been cleansed from them through writing?

Toptaş: Yes, maybe I have. Writing is obviously more than that for me. But in a certain sense I do feel cleansed from that dirtiness through writing.

As a being who lives on this planet, I want to give the planet something back, something I am in a position to give. That's why I sit there in the middle of the night. I try to expand life, one word at a time. Obviously not for the money. I have never lived from what I earn writing books; even if they had never been printed… I would still have written them.

The author
Born in 1958 in Çal (Denizli), Hasan Ali Toptaş is one of the prominent writers of contemporary Turkish fiction. Toptaş published his first story collection "Bir Gülüşün Kimliği" in 1987. Hitherto he published three anthologies with short stories and four novels. He currently lives in Buldan in the Southwest of Turkey.

The Turkish Book Market
Hoping for a Push towards Modernisation
In all the current debate on the accession of Turkey to the European Union, there has been no mention of the book market in that country. During a visit to Frankfurt, Turkish translator Vedat Çorlu provided insights into the book industry in the country on the Bosporus

END_OF_DOCUMENT_TOKEN_TO_BE_REPLACED
Social media
and networks
Subscribe to our
newsletter